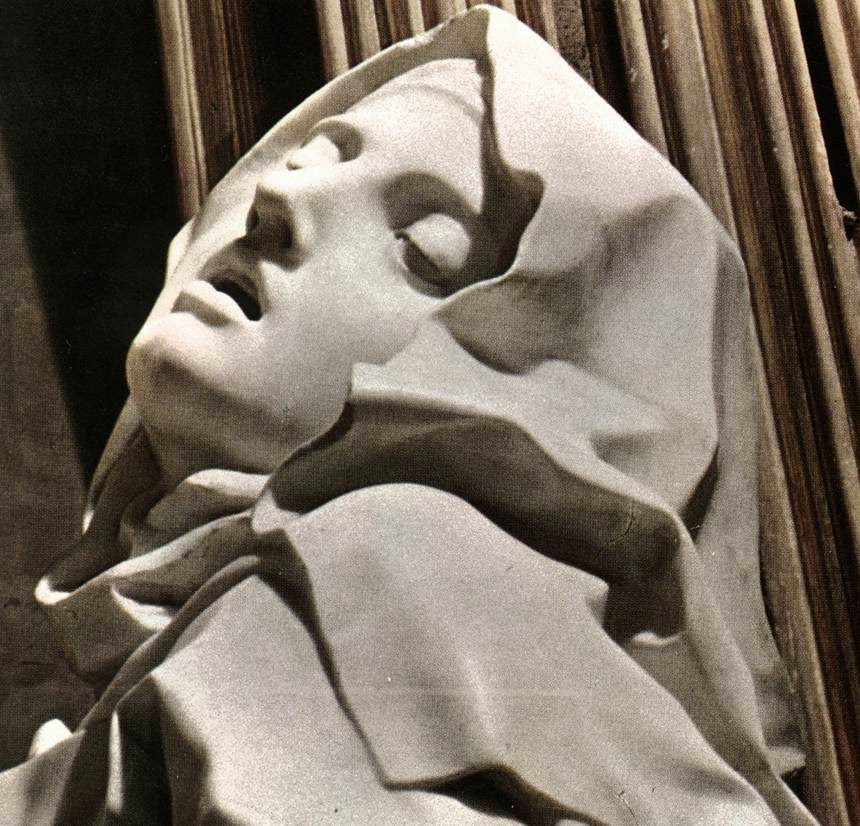 Detail from Ecstasy of St Teresa by Bernini

For many centuries Catholics have been encouraged to practice a devotion known as ejaculatory prayer. My copy of Our Lady's Prayer Book from 1929 has, indeed, a list of indulgenced ejaculatory prayers with the amount of time off purgatory added in brackets afterwards. Saying, for example, Sacred Heart of Jesus I trust thee is worth 300 days. In recent decades the Church has adopted a less apparently mechanical approach to purgatory. Also for reasons which might or might not be obvious to the reader the term 'ejaculatory prayer' has fallen out of favour. Various other names for the practise have been used with 'exclamatory prayer' being perhaps the most straightforward replacement.

However it is described the practice is one of those deceptively simple and seemingly easy devotions which are actually both harder to practice and considerably more beneficial than you might suppose. The idea is to take a word or group of words, perhaps a short scripture passage or a mini prayer, and repeat it frequently during the course of the day out loud or silently. This is different from a mantra in that the prayer is not intended to be uninterrupted, rather it is itself intended to be an interruption. That is, by using an exclamatory prayer at odd moments, waiting for the kettle to boil, queuing up at the shops, in a boring meeting or whatever, one calls to mind the sacred whilst in the midst of the workaday business of you just being you and doing your thing.

The unexpected power of this prayer lies in the simple fact that a word is never just a word and a phrase is never just a collection of words. Every time we name something or enunciate a concept, even if we do it hurriedly or only half consciously, then it invokes with it a connection of memories and associated ideas and emotions. These act upon us as frequently as we invoke them and that they may be doing so at a level below our awareness does not make them any the less powerful. If we say, for example, I do believe, Lord: help my unbelief. then we will be recalling a particular episode from the Gospel, we will be imaginatively entering into the lives of our Lord, His Disciples and those who went to seek Him and we will be making a plea for conversion which, in its turn, calls into our mind and heart the recollection how much and for why we so desire to be converted. All of this occupies but a few seconds of the day and much of it occurs, as I said, at a level below our discursive mind's awareness. Nonetheless, repeat the action dozens of times a day and thousands of times a year then it will have a gradual transformative effect upon our very souls.

Another substitute for 'ejaculation' is 'aspiration'. The concept of prayers of aspiration is my favourite way of thinking about the devotion because aspiration is such a delightfully multi-layered word. It can indicate that we have a desire to achieve something or to become something. Thus if we pray Be thou my speech, be thou my understanding.  then we are aspiring to make God central to everything we see and everything we think. Aspiration also refers to breath so this devotion is a way of making prayer as natural to us as breathing. And, of course at the centre of the word is the root 'spirit' reminding us that Spirit and breath are closely united in meaning and closely related to each other so aspirations are ways of calling down the Holy Spirit upon us. Incidentally previous generations of Catholics would have been familiar with the idea that "'Come Holy Spirit' is an ejaculatory prayer" but modern minds might be minded to rephrase that slightly differently.

Another difference between this and the mantra is that we are not restricted to using just one aspiration or exclamation. During the course of the day or week or year we can use several different ones. Whatever serves to help raise our mind and heart to God in the situation in which we find ourselves. I used to like saying this is the day the Lord has made, let us rejoice and be glad in it (Psalm 118) on grey, gloomy, rainy days. I stopped because other people seemed to find it annoying. When feeling down I might say For I know that my Redeemer lives (Job 19:25). When feeling beleaguered by life or by my inner demons I might call O God come to my assistance, O Lord make haste to help me (Psalm 69/70)  and so on and so forth.

The devotion could take the form of simply using a single word, most usually a name either Jesus or Mary being the obviously Catholic choices. If a word is never just a word then a name most certainly is never just a name. This is particularly the case with names with which we have been familiar since childhood. Every time we invoke it we call up a huge range of associations. Of course these names are also often used in negative ways in cursing or casual blasphemies and as we do ourselves unsuspected good in invoking them prayerfully so, I would suggest, we do ourselves unsuspected harm in using them thus disrespectfully. Be that as it may, the Church holds that both these names contain and convey power within them and if we use them prayerfully during the course of the day then we allow that power to irrupt into our lives and seep into our consciousness as an important part of our own identity.

Personally, over the years I have used a wide variety of such aspiration but at any one time there is usually one which I use massively more than any other, when I walk, when I wait for a train, while I am cooking a meal, when too tired to read, when about to fall asleep. Currently my fave is Mary, help of Christians, pray for us which seems appropriate on all sorts of occasions. It is also a prayer to be found in the Litany of our Lady and the practise of praying litanies is a rich source of aspirational prayers as is the practise of Lectio Divina, both forms of prayer which I hope to be able to write about in future blogs.