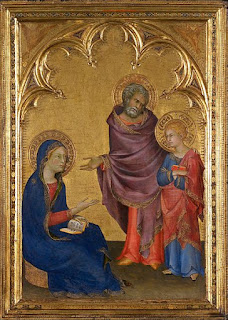 Thinking that he was in the company, they came a day' s journey, and sought him among their kinsfolks and acquaintance. And not finding him, they returned into Jerusalem, seeking him. And it came to pass, that, after three days, they found him in the temple
(Luke 2:44-46)

Hail Mary, who filled with anxiety desperately searched for your Son.

After the shadow cast by Simeon's prophecy and the shock of the sudden flight into Egypt the Holy Family were able to spend some years enjoying the tranquillity of order. This enabled them to do the thousand-and-one tiny things that make up the quiltwork of quiet happiness. Following the great and joyful celebration of Passover Mary and Joseph could set off on the journey back to their Nazareth home in high good humour and deep contentment.

We can see this third sorrow coming upon our Lady not suddenly but slowly by degrees. First, a little surprise that Jesus is proving so hard to find. Then some doubt whether He will be found. An ever growing anxiety and anguish as it becomes more and more certain that He has been lost. A long day's journey back to Jerusalem filled with worry and thoughts about all the things which might have gone wrong. 'Is this,' Mary perhaps wondered, 'the prophesied sword, and my Son so young?'

There has been much speculation and debate as to why our Lord acted as He did. This need not detain us here, our concern is with His Mother and her response to Him. St Luke records it for us-
"His mother said to him: Son, why hast thou done so to us? behold thy father and I have sought thee sorrowing."
She does not reproach or berate Him, though a good many mothers might feel she would be justified in doing so, instead she simply asks Him for His reasons and lays bare her emotional condition before Him. She had been sorrowing with all the sorrow that her perfect love for her perfect Son could experience. A sorrow beyond the power of mere words to describe or for the imagination of the imperfect to fully comprehend.

The Evangelist tells us two further things relevant to our Lady after Jesus had replied to her petition-
"They understood not the word that he spoke unto them" and "His mother kept all these words in her heart." Sorrow does not always give birth to wisdom but it can do. With Mary no doubt it did. As she reflected on her experience and the 'hard saying' of our Saviour she would, enlightened by Grace, more and more fully come to understand it. And when the time came for her Son to leave home and begin the journey that would end in the shame and death of Calvary that hard-earned wisdom would have given her strength and purpose to aid Him in His salvific mission.
thoughtfully detached

The painting is Christ Discovered in the Temple by Simone Martini