Of Toads and Twelve Year Olds 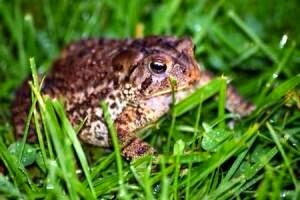 A man offered to pay a sum of money to his 12 year old daughter if she mowed the lawn. The girl went at the task with great zest and by the evening the whole lawn had been beautifully mowed – well, everything except a large uncut patch of grass in one corner.
When the man said he couldn't pay the sum agreed upon because the whole lawn hadn't been mowed, the girl said she was ready to forego the money, but would not cut the grass in the patch.
Curious to find out why, he checked the uncut patch. There, right in the center of the patch, sat a large toad. The girl had been too tender-hearted to run over it with the lawn-mower
Where there is love, there is disorder.Perfect order would make the world a graveyard.
From The Prayer of the Frog by Anthony de Mello

10 Then the Lord said, ‘You are concerned about the bush, for which you did not labour and which you did not grow; it came into being in a night and perished in a night. 11 And should I not be concerned about Nineveh, that great city, in which there are more than a hundred and twenty thousand people who do not know their right hand from their left, and also many animals?’
Jonah 4

The little parable comes from a collection of such stories by the Indian Jesuit Tony de Mello. Catholics have been advised to approach his works with caution but this at least strikes me as a delightfully innocent story. It impressed me from the first time that I read it which was, I think, in 1996 as I was preparing to be received into the Catholic Church. I am always a bit wary about being overly autobiographical because, the Lord knows, I am a dull enough person who has led a suitably dull life. Nonetheless, I will make an exception here because I think there is a more universal point to be made.

The essence of the toad and the twelve year meme old is that if we want to allow toads to be toads and to do toady things then we have to sacrifice things that we ourselves may desire but do not need. The daughter did not need the money, the father did not need a perfect lawn the toad did need to be left in peace. Although the little creature can do us no good it feels instinctively the right thing to do to leave her to get on with her life and let the other things slide. Of course sometimes the desire for money or for outward perfection will prompt people to override their instincts and decapitate their tiny guest. The instinct which we either accept or override has a name, it is called Love.

Before my conversion to Catholicism I was a radically left wing political activist. The notion that 'you cannot make an omelette without breaking eggs' was a practical working axiom for me. The eggs which required to be broken were many and various but shared one common thing, none of them were eggs, all of them were people, the bourgeoisie, the Conservatives and especially those radical leftists who disagreed with my faction, whoever. Had I at that point come across the de Mello parable I suspect that I would have ridiculed it as sentimental tosh. Or, at least, my head would have ridiculed it whatever my heart might have thought about it.

But now, a bare few months into my Catholic journey, I received the story with joy and have treasured it ever since, lo these 18 years or so. What had changed and why? The most truthful answer to that is "I don't know?" The transformation was one of these hidden things and long years would pass before I could express in words why the philosophy which underlies the story was essentially right and the one which I had abandoned was essentially wrong. But I will have a stab at guessing what had gone on deep within my younger (but not very young) self.

It had seemed to me that what was required to make the world into a better place, a place without poverty, war, hatred or any of the evils we fear, was the exercise of power. By the powers of ideas a critical mass of the population could be persuaded to take control of the State. By the power of the State not only could unjust structures and systems be forever changed and replaced with just ones but those sections of the population as yet unconvinced by the revolutionary ideas could be encouraged to accept them, one way or another. The ideas, I was convinced, were right and only those who were either ignorant of them or who had a vested interest in the status quo could oppose them. In the service of those ideas no action could be wrong which furthered them, no action could be right which hindered their furtherance.

I realise that I have made myself sound like an unpleasant extremist but, naturally enough, I did not habitually portray things to myself in such stark terms. Be that as it may, from the moment that I came to accept the person who exercised power by allowing Himself to be crucified as my Lord and the Saviour of the world then my perspective underwent a dramatic shift. First my heart then trailing behind it my head realised something crucial about the nature of power. It was summarised by the then Cardinal Ratzinger in these words-

Those Christians who are in positions of authority, who can command and expect to be obeyed, have a responsibility to follow the path of wisdom which our lawn mowing girl has shown as. Or at least the example set by God in declining to destroy Nineveh. The two 20th Century Popes canonised in April 2014 each in their different way exercised this kind of wisdom. John XXIII presided over a Church involved in deep soul searching and anguished re-examination of its fundamental way of doing things. He did so with a light touch and a gentle voice. John Paul II although often considered to be a much more authoritarian figure nonetheless presided over an era of unprecedented expansion of New Ecclesial Movements often led by lay women or men, approving indeed a constitution for the Focolare movement which ensures that its leader will always be a woman. He also extended the ecumenical hand of friendship to many beyond the strict bounds of the Church such as Brother Roger of the Taize movement who was the first layman to receive Holy Communion at St John Paul's funeral.

In our lives, then, it is always important to look out for toads. They may be the very creatures who lead us to heaven. Procrusteanism is the enemy of sanctity.

Email ThisBlogThis!Share to TwitterShare to FacebookShare to Pinterest
Labels: Christianity