And It Was Night 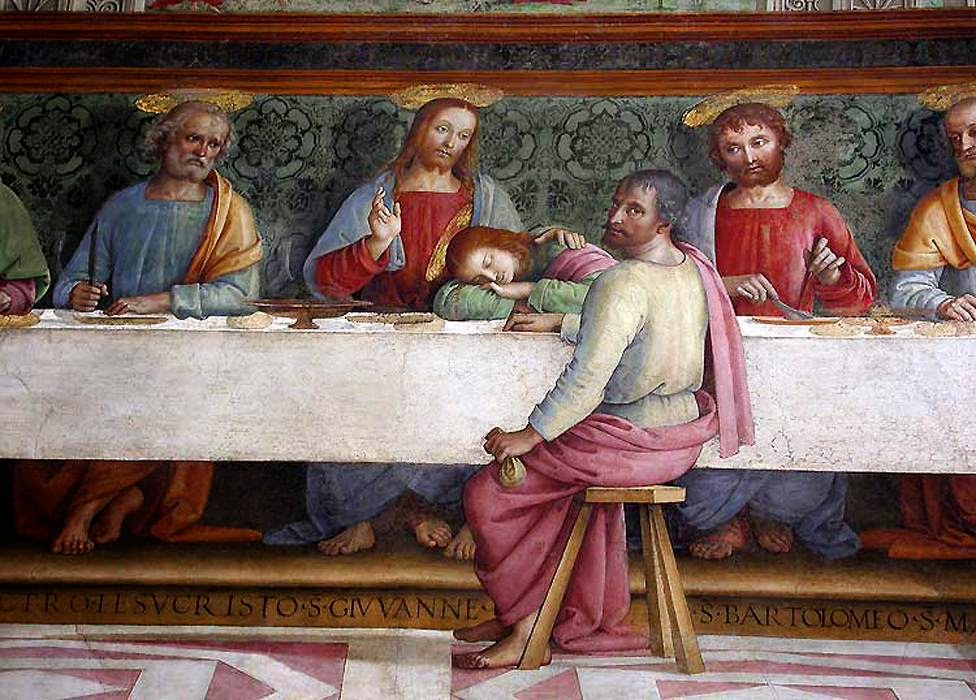 After receiving the piece of bread, he went out immediately. And it was night.
John 13:30

The Gospel account given by St John in large part consists of long periods of dialogue interspersed by short narrative sections. It is tempting to consider those sections are simply being bridges leading from one conversation to another put in merely to give some context. As I have mentioned in some of my earlier posts, however, St John's is the most highly structured of all the Gospel accounts and every word usually does duty at more than one level. If we spend time meditating on these narrative passages we can see that each of them carries more meaning than may at first appear and serves the Evangelist's didactic purposes as much as any other part of the Gospel. And so it is with this record of the last few moments that the traitor Judas Iscariot spent in the friendly company of the Apostles. When next they met it would be as enemies.

We can conveniently divide this into three sections beginning with Jesus handing some bread to Judas. The concept of bread is central to the Christian project. It is widely thought, for example, that the chief significance of the birth of our Lord at Bethlehem is that it was a fulfilment of Old Testament prophecy. So much so indeed that atheist and theologically liberal critics suggest that St Matthew and St Luke fabricated their accounts of the Nativity in order to fit in with this preordained schema. The name Bethlehem, however, means 'house of bread.' So we can say that Divine Providence achieved a double whammy by ensuring that Jesus was born in a place which both looked back to historical prophecy and looked forward to His own mission.

Earlier in the Gospel the Christ describes Himself in this way “I am the bread of life” (John 6:35) and He also said  Don’t work for the food that perishes but for the food that lasts for eternal life, which the Son of Man will give you (John 6:26) As the other Evangelists tell us previously in this same meal He had shown what He meant And He took bread, gave thanks, broke it, gave it to them, and said, “This is My body, which is given for you" (Luke 22:19) So, what we see in this segment of narrative is Judas accepting the food that perishes as his portion when he could have instead accepted the food that lasts for eternal life. It is customary to think of thirty pieces of silver as the price for which he sold the Saviour but St John illustrates here that it was even less than that. Other translations refer to this piece of bread as a 'morsel' or a 'sop'. It was a mere nothing and he preferred that to everything. He was betraying himself as surely as he was betraying our Lord. To add to the burden of his folly and sin he had earlier participated in the Eucharist so that he received the sacred elements of communion falsely and now took what was the object of his real desires, that is the purely carnal, material rewards that an unspiritual life offers.

He went out immediately. There is no gap between a decisive act of the will and its spiritual and moral consequences. We can see this at what you might call both the other end of the Gospel and the other end of the moral universe where the immediate consequence of Mary saying “Behold, I am the handmaid of the Lord. May it be done to me according to your word.” (Luke 1:38) is that she conceives with joy Jesus in her heart before she does so in her body. Here Judas has reached the crucial point. He could have gone back on his agreement with the High Priest. His heart could have been softened by this shared banquet with our Lord and His friends. But now he made the final step within himself. He took the bread that perishes and with it he perished himself, all the rest was just an acting out in the physical realm a destruction which he had taken upon himself in the spiritual one. It reminds us that in Genesis God had said to Adam and Eve of the tree of the knowledge of good and evil you shall not eat, for in the day that you eat of it you shall die (Genesis 2:17) The story tells us that the pair lived for many years after they had eaten of that fruit but the Almighty had spoken truly since death entered their souls from the moment that they decided to eat from this tree.

As a completely random aside, the fruit that Adam and Eve ate is generally depicted to be an apple. This puzzles many people since the item in question is never named and it wouldn't necessarily be the first thing you would think of as a Middle Eastern fruit. My guess is that the idea stems from this passage in the Song of Songs Under the apple tree I raised thee up: there thy mother was corrupted (Song 8:5) Interpreting the Song allegorically was a small industry in Medieval times since obviously it's not the erotic poetry it might appear to be. Here the soul of the believer or humanity in general is raised up by Jesus from the corruption inherited from our first parents. And since the corruption took place under an apple tree the agent of corruption must have been an apple QED. 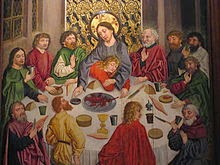 And it was night. St John is not simply acting as a speaking clock here. As death had entered the soul of Judas, both his own and that of his Master, he plunged into deep gloom. This is your hour, and the power of darkness (Luke 22:53)  For our wrestling is not against flesh and blood; but against principalities and power, against the rulers of the world of this darkness  (Ephesians 6:12) Jesus had said of Himself “I am the light of the world. Whoever follows me will not walk in darkness, but will have the light of life.” (John 8:12) Judas by walking out with murder in his heart left behind the light and found only darkness within and without. Whoever walks in the dark does not know where he is going. (John 12:35)

Looking at the passage as a whole then. We can see that the bread of life, both spiritual and material, comes to us from the hand of God. If we accept only the material we die spiritually. If we accept only the spiritual we would die physically. With gladness and thanks we should accept all that the Lord gives us in order to live fully. More than that 'He gives' and that sets us an example, if we have received an abundance of His gifts then it behoves us also to give, to act as His agents. If we hoard material wealth we resemble Judas, if we give it away we resemble Jesus. If we refuse to accept His gifts then we immediately banish ourselves from His presence. But why would we? Why did Judas? Material things are tangible, we can see them, touch them, use them to satisfy our physical desires. Spiritual things are invisible, sometimes we can be aware of their presence but often enough they are like a seed hidden in the soil, it may be growing and preparing to bear abundant fruit but we are unaware, other than by faith, that this is so. You need neither faith nor love to use physical objects, you need both to fully respond to the spiritual gifts that come to us from Christ Jesus. And finally night is the natural home for those who are satisfied only with the things of death. And this is the verdict, that the light came into the world, but people preferred darkness to light, because their works were evil. For everyone who does wicked things hates the light and does not come toward the light, so that his works might not be exposed. (John 3:19-20)