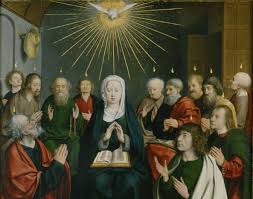 And they were all filled with the holy Spirit and began to speak in different tongues, as the Spirit enabled them to proclaim
Acts 2:4

There is an ancient Chinese saying that when the sage points at the moon the idiot looks at his finger. This refers to the idea that religious actions, practices and rituals which are designed to point beyond themselves to a transcendent reality are often transformed into ends in themselves, and dead ends at that. The 'spiritual but not religious' crowd, enemies of organised religion and theological liberals emphasise this idea and suggest that the individual presenting themselves before the ultimate spiritual reality is the only show in town. In this view the function of the Church is, at best, merely an organising one, to carry out good social work and to gather believers in one place so that they can form suitable affinity groups.

The saying, however, has an important secondary meaning which is often overlooked. We can see the moon without the help of the sage but we cannot see it through his eyes without his help and guidance. That is, both the sage and his finger are necessary parts of the process which transform our understanding of the moon into something which we did not possess before. From a Christian point of view it is sometimes argued that since we receive the Holy Spirit, who is God Himself, then what need do we have for formalised actions, practices and rituals since we can be guided directly? What happened in the days immediately after this gift was first received? St Luke tells us-
They devoted themselves to the teaching of the apostles and to the communal life, to the breaking of the bread and to the prayers.
Acts 2:42
So, although each believer had been touched by the Holy Spirit in order to grow in understanding, love and effective response they had recourse to the teachings brought to them by the companions of Jesus and to the spiritual strengthening offered by the sacrament of the Eucharist and by the liturgy. In that sense the Spirit is like the moon and the sage, we can each perceive its presence within us but to grow in response to its presence requires us to make an effort beginning with having the humility to recognise our own weakness and ignorance. The Apostolic Church is our sage and wise guide, the sacraments are the finger of God. Believers need them both if they are to both see and understand the true light which comes to us from the Father and the Son.

Blessed John Henry Newman, of course, expressed this idea with more elegance than I can hope to muster-
Our Prayers and Services, and Holy days, are only forms, dead forms, which can do us no good. Yes, they are dead forms to those who are dead, but they are living forms to those who are living. If you come here in a dead way, not in faith, not coming for a blessing, without your hearts being in the service, you will get no benefit from it. But if you come in a living way, in faith, and hope, and reverence, and with holy expectant hearts, then all that takes place will be a living service and full of heaven.
(Parochial Sermons Vol 7:13)


The painting is Pentecost by  Jan Joest van Kalkar