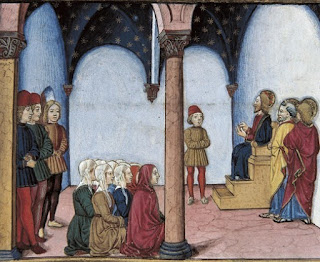 In contemporary English the command 'Repent' is generally considered to have 'of your sins' as its object. This, however, is not necessarily so. That is, while the correct response when considering your sins is always repentance it does not follow that the correct response when thinking about repentance is an exclusive focus on sin. The two things are not invariably linked in Christian Scripture. St Mark reports the beginning of the mission of Jesus in this way-
After John had been arrested, Jesus came to Galilee proclaiming the gospel of God: “This is the time of fulfillment. The kingdom of God is at hand. Repent, and believe in the gospel.”
(Mark 1:13-14)

The final clause might be interpreted as two separate commands-
1)Repent of your sins and also 2)believe in the gospel.
But it seems to me to be more likely that it is a single command-
Repent and therefore believe in the gospel.
If we consider that the word 'repent' has an existence apart from the word 'sin' then we need to know what it means. The Greek original of which it is a translation is metanoia which literally means change ones mind. Since, however, the ancient Greeks meant something much more by the concept of Mind than modern English speakers do the literal translation does not help us much. I think that we would have a clearer grasp of the command if we took it to mean something like 'completely reorient yourself and your direction of travel.'

The answer to the question 'repent of what?' then becomes 'of everything.' This is why our Lord would think that one who repents would therefore believe in the gospel because if we orient the focus of our being and activity away from the material realm of the senses then it can only be towards the spiritual realm which He names the kingdom of God. Of course the demand to repent of everything is the most radical of all possible demands and prompts the supplementary question why? It is easy enough to assess what we would lose from such a change of direction but it is less clear what it is that we would gain. Indeed the why question is one of the underlying assumptions of the Atheist Bus Campaign slogan "There's probably no god. Now stop worrying and enjoy your life." The assumption here being that enjoying life is the thing we would lose and worrying is the thing which we would gain if we respond to Jesus' invitation.

There is actually some truth in this if we accept the idea that the object of repentance is always 'of your sins' because then we would spend all our time worrying about how good or bad we are at adapting our external behaviour to a more or less rigid set of rules many of which seem arbitrary to ourselves and even more so to our neighbours. However if we go with the idea that it means a reorientation of everything then it knocks two of the slogans ideas on the head. Firstly, a life directed primarily to the things of the spirit enables us to affirm that actually, yes, there is a God. Secondly, we discover that worry is far less of a factor in the spirit filled life than it is in the materialist one and that if its characteristic isn't enjoyment that is only because its characteristic is joy. What I am doing here of course is making an assertion. The only way to find out if it is a true assertion is to try it for yourself. Repent and be made anew.

The painting is Cristoforo by De Predis