The Silence of Pentecost 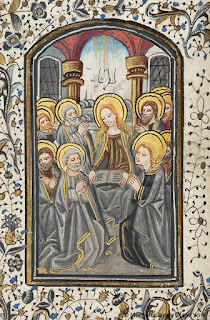 And I will ask the Father, and he shall give you another Paraclete, that he may abide with you for ever. The spirit of truth, whom the world cannot receive, because it seeth him not, nor knoweth him: but you shall know him; because he shall abide with you, and shall be in you
(John 14:16-17)

St Luke in his dramatic account of the first Christian Pentecost (Acts 2:1-41) focuses, naturally enough, on those whom the Spirit had called to active life. The disciples who spoke in strange languages, St Peter fulfilling his Apostolic function as preacher. We can be sure though that amongst those gathered in the Cenacle there were some followers of Jesus, like Our Lady, Mary of Bethany and St John, who were contemplatives. For those whose mission that day was to talk the Spirit appeared as a tongue of flame. Perhaps for the contemplatives it was more akin to an arrow point which was to descend and transpierce their hearts with the fire of divine love.

We each have a unique relationship with the Father through the Son, and the Holy Spirit guides us into that on the path which He knows to be best for us. We can, perhaps, infer from the Gospel how it was that He guided those saints whom He called primarily to the inward, silent life on the day that the Church, with all her vocations, was born.

In the first book of his two volume history of the primitive church St Luke tells us how the Blessed Virgin responded to the things of God "Mary kept all these words, pondering them in her heart" (Luke 2:19) and "Mary said: My soul doth magnify the Lord. And my spirit hath rejoiced in God my Saviour." (Luke 1:46-47) Which is to say that the Theotokos held all these things before the eyes of her heart and this led her to pour out to the Almighty her grateful thanks and abiding joy. Her lips sang sometimes but her grace-filled spirit sang all the time. Perhaps on this historic Pentecost it was for her Son above all that she was grateful as the Spirit led her ever deeper into knowledge and understanding of Divine things. Mindful also of the commandment to love her neighbour as herself she no doubt too reflected with thanks on the new children which Christ had given her from the Cross. All who could be called a beloved disciple of Jesus were also now beloved children of Mary.

Tradition has identified Mary Magdalene with Mary of Bethany though some now dispute this (primarily for political reasons.) However that might be, of her Luke says "a certain woman named Martha, received him into her house. And she had a sister called Mary, who sitting also at the Lord's feet, heard his word. But Martha was busy about much serving" (Luke 10:38-42) If Mary sould sit still and give her undivided attention to the Son in the midst of all the bustle created by her sister and the Apostles it would not surprise us to learn that she did precisely the same thing when it was the Spirit that called for her entire focus. An upper room filled with busy Martha's would not distract her from the one thing that mattered.

About this same Mary the Evangelist St John wrote "Mary therefore took a pound of ointment of right spikenard, of great price, and anointed the feet of Jesus, and wiped his feet with her hair; and the house was filled with the odour of the ointment." (John 12:3) This was an act of much self abasement and a devotion of things of great value and beauty to God. Many of those seeing it, especially the traitor Judas, decried it as needlessly extravagant but the Lord praised it highly. It was impractical and unworldly and on Pentecost day when we recall the eminently practical business of preaching in all the tongues of the world and converting souls to the Church we should remember too the witness borne by the Magdalene. Through silence, humility and the creation of beautiful things in the service of worship the Holy Spirit works just as effectively and powerfully as He does in all the other charisms which He gives to the faithful.

Not many days before the Holy Spirit descended, by the Lake of Tiberias, St John was the first of the Apostles to recognise the Risen Messiah "That disciple therefore whom Jesus loved, said to Peter: It is the Lord" (John 21:7) The quick eyed love born of contemplation gave the young Evangelist a power of discernment greater than that of his companions. On this same occasion St Peter had been confirmed as chief of the Apostles and shepherd of the Church which is why, within a few weeks, it was he who preached to the people at Pentecost. We see here, again, that different people are led in different ways by the Spirit, some to be active leaders and teachers, others to be devoted to quiet love and contemplation. Peter laboured to give us the Church, John allowed the Spirit to flow through him and gave us the most sublime of the four Gospel accounts which we now have.

It is sometimes asked what useful purpose the Catholic contemplative orders serve. I like to think that on that birth day of the Church the efforts of the missionaries on the streets of Jerusalem were strengthened by the prayers of the contemplatives in the Cenacle joined to the power of the Spirit. Furthermore, whenever from time to time the active disciples and the new converts ascended to the Upper Room the sight of the contemplatives absorbed in silent prayer both inspired them more and filled them with a sense of the peace of Christ which passes all understanding. And as she began so has the Church ever continued down to this day with the devoted lives of those called to bear silent witness to the faith through an enclosed vocation serving the spiritual life and health of Christians in a hidden but powerful way.
@stevhep