I submitted this to the Guardian perhaps over optimistically 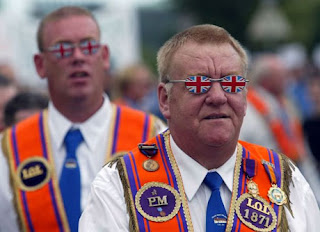 Reading Andrew Browns recent piece on Creationism at the Giants Causeway on the weekend before the big Orange Order 12th of July parades brings about an interesting juxtaposition of ideas. Andrew writes of the Young Earth Creationists-

the world will not take much notice of my preferences, or yours. If we are to change it, we need reasons and explanations, not just wants. And we can't get the reasons and explanations that we need without reaching outside science, and outside the market. To the extent that creationists, too, are trying to do that, we should sympathise.

Which reminded me of these words of Patrick Pearse The Orangeman is ridiculous in so far as he believes incredible things; he is estimable in so far as he is willing and able to fight in defence of what he believes. It is foolish of an Orangeman to believe that his personal liberty is threatened by Home Rule; but, granting that he believes that, it is not only in the highest degree common sense but it is his clear duty to arm in defence of his threatened liberty.
http://publish.ucc.ie/celt/docs/E900007-005?fragment=6&numdiv=View

Whilst Brown and Pearse are an unlikely pairing, one a dewy eyed romantic with mystical leanings the other an Irish Republican, they both point to an almost universal reality. People have a need to explain the world to themselves and to explain themselves to themselves. Many of the religious, philosophical or political belief systems which we have do not consist of people making things up, the "imaginary friend syndrome", they consist of people encountering facts which contain for them some kind of emotional content. The facts may be true facts but the importance they have for the one who attaches themselves to them in a partisan fashion is that they convey a personal emotional "hit". They are facts which make us feel that we understand more than we did before we encountered them.

I think that it is more or less inevitable that most of us seek out such emotional truths or at any rate encounter them. And our immediate and passionate attachment to them is also practically inevitable. What follows on from that, however, is much more dependant upon personalities or the contingent circumstances in which we dwell. The Young Earth Creationist and the Orangeman stick doggedly to their facts and will forever combatively assert them against all other facts for which they feel no positive emotion. The parade they make of their attachment through the public streets, and especially the "enemy" streets, is a statement that the explanation that they have found is the end of the search for meaning, take it or leave it.

More commonly I think is the experience of finding fulfilling facts but not thereafter entering into a solemn pact and covenant to ignore all subsequently encountered unfulfilling facts. Not least because all our fulfilment is only ever partial at best. We still hunger and thirst for more and better explanations and this need fuels our continuing search. We resist the notion that there are no such universal explanations, and those who believe such a notion are themselves simply attached to an emotionally satisfying truth. Another unlikely pairing, Marx and Augustine, perhaps have between them described this as well as anyone ever has.

Religious suffering is, at one and the same time, the expression of real suffering and a protest against real suffering. Religion is the sigh of the oppressed creature, the heart of a heartless world, and the soul of soulless conditions.
http://www.marxists.org/archive/marx/works/1843/critique-hpr/intro.htm

You move us to delight in praising You; for You have formed us for Yourself, and our hearts are restless till they find rest in You.
http://www.newadvent.org/fathers/110101.htm

The important question each of us needs to answer is not so much "are the facts that I believe true?" but "are the facts that I ignore unimportant?" No universal explanation can ultimately satisfy us if, deep down, we know we are suppressing inconvenient truths in order to attach ourselves to pleasing ones.