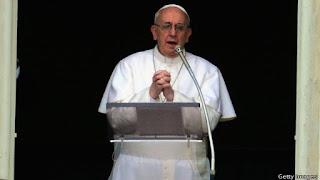 “We all know, from our communities, parishes and neighbourhoods, the bad brought to the Church and the scandal caused by those people who call themselves very Catholic, who frequently go to church, but then, in their daily lives, don’t take care of their families, speak ill of others, etc.”
From the inside looking out we might think it possible to be part time Christians. We can sometimes give ourselves a break from being quite so holy, from holding ourselves to quite such a high standard. Pope Francis in his remarks just quoted takes another view. He goes on to point out-
“This is that which Jesus condemns because this is a Christian 'counter-witness.‘“ (Vatican Insider)
From the outside looking in everyone who knows us will consider that anything we do has the mark of ‘Christian’ about it.And when we publicly do things which are discreditable to ourselves we are bringing down scandal upon the Church. Quite literally in fact because the word ‘scandal’ means stumbling block and every time we bear a counter-witness to the Gospel we are putting a stumbling block in the way of others entering the Christian life.

Some of the things we do may be hidden or private but malicious gossip, ‘speaking ill of others’ as the Holy Father puts it, is always by its nature a public act. Very often it becomes more public than we intend since once it is put into circulation who knows where it will end or what damage it may do? As St James put it-
“Consider how small a fire can set a huge forest ablaze. The tongue is also a fire. It exists among our members as a world of malice, defiling the whole body and setting the entire course of our lives on fire, itself set on fire by Gehenna”
(James 3:5-6)
From this perspective the damage done by gossip is not simply the harm done to the person about whom you are being spiteful. It is the perception which you create that being hurtful, nasty and vicious about someone is perfectly compatible with the Christian faith. You are bearing witness to your neighbours that the love of which Christians speak is an abstract, formal, dead sort of thing but that the living spirit of Christianity is, like that of the world, to do down people whom you don’t like and do up people whom you do.

His Holiness proposes another approach- internal conversion  “Without a purified heart, we can never have truly clean hands and lips that speak sincere words of love, mercy and forgiveness.” he says “if the heart doesn’t change, we are not true Christians. The border between good and evil does not lie outside of us, but rather within us.” Such a conversion cannot be entirely our own work, we must ask for an infusion of Grace to help us to be transformed-
“But the wisdom from above is first of all pure, then peaceable, gentle, compliant, full of mercy and good fruits, without inconstancy or insincerity. And the fruit of righteousness is sown in peace for those who cultivate peace.”
(James 3:17-18)

We do however need to desire this Grace, to pray for it and to co-operate with it when we get it. Continuing in the same old way until such time as the Lord chooses to change us without any effort or strain on our part is not an option. It is in the nature of gossip that we often scrutinise intently and comment about unkindly the motives of others while leaving our own strictly unexamined. We need to begin to reverse that process. Ask ourselves why are we talking in this way about this person? Why do we want to see them shipwrecked, humiliated, demeaned, in the eyes of others? And why do we want to be seen as the agents of this process? Or, at least, why do we so enjoy hearing others do this in our presence. Be sure if the answers to these questions do you no credit then they will do the Church great harm as well. Paradoxically perhaps your fellow gossips may not wish to behave like Christians but they may want you to do so. You disappoint them at some level if you don’t and you erect a barrier to their conversion. If you are not bearing witness of a better way then you are bearing witness to a worse one. The same as other people but with added hypocrisy and sanctimoniousness. Pope Francis ended with a prayer we should make our own:
“Let us ask the Lord, through the intercession of the Most Holy Virgin, to give us a pure heart, free of all hypocrisy — that’s the adjective that Jesus used with the Pharisees: hypocrites, because they say one thing and do another. Free from all hypocrisy so that in this way we are able to live according to the spirit of the law and reach its goal, which is love.”
@stevhep