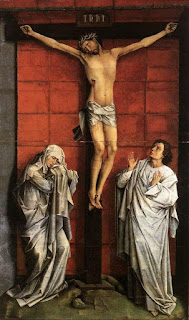 Lord, what is man that you take notice of him;
the son of man, that you think of him?
Psalms 144:3

Look into this mirror every day, O queen, spouse of Jesus Christ, And continually examine your face in it.... that mirror suspended upon the wood of the cross
St Clare of Assisi- Fourth Letter to Blessed Agnes of Prague

In Part One I suggested that by gazing into the mirror of Christ Crucified we can see answers to the question What is Man? (male and female) because Jesus is an icon of what a human should be like and because His situation is emblematic of the human condition. I proposed that 'Man is loved and lovable' is one conclusion we can deduce and that 'Man is a sinner' is another.

The Crucifixion is something voluntarily endured by our Lord because it is the efficient means for redeeming fallen humanity. We can deduce from this that, insofar as He is representative of us, that we can add 'Man is a lover,' that is one who loves, to our list of essential human qualities. However, although we can say that Man is loved and lovable unconditionally we must qualify the truth that Man is a lover with the fact that he is also a sinner. This means that every expression of love or feeling of it is, at least potentially, tainted by sin which is produced by disordered affection for or attachment to certain inferior goods at the expense of Good as such.

The idea, recently expressed, that 'love wins' is unreservedly A Good Thing is something I have challenged on my other blog. For our purposes I would say that love translated into intention and act always has to be evaluated in the light of how it fulfils its purpose. What this purpose is might be more easily be discussed if we consider that another conclusion we can draw from the mirror of Christ Crucified is that 'Man is dependent.'

An archaic meaning of the word dependent is 'hanging down' so Jesus is literally dependent upon the Cross. More generally though it is true to say that humans are wholly reliant on the objects of the universe. They need air to breathe, food to eat, materials for homes and clothes and so on. More than that before our Lord was in a position to say 'it is finished' and complete His mission through death He first had to address the needs of His mother and the beloved disciple, placing them into each others care.(John 19:26-27) It might be said that a sub-category of 'Man is dependent' could be rendered as 'Man is necessarily social.' That is, humans depend not only upon things but upon each other. Or, to be more personal I depend upon others and others depend upon me. This applies even to hermits or misanthropes since our present state of being incorporates our entire personal history and human life begins as dependent from the moment of conception in the womb of another person. Also what we do now may intentionally or unintentionally have an impact on another person in the future.

These things taken together, Man as lover, sinner and dependent, have implications. For people on the Left this is a fairly uncontentious statement when it applies to the environment, where humans are called to be stewards and to put curbs and restraints upon their appetites in order to prevent the destruction of things and its incident impact upon humans. However, it becomes contentious when applied to societies and individual people. For the Right the reverse is true, they are often happy to despoil the planet but insist upon particularly strict form of outward behaviour and morality. As a Catholic I would say a plague on both your houses, we must protect both the planetary and the human ecology. As Pope Emeritus Benedict XVI put it-
"The book of nature is one and indivisible; it includes not only the environment but also individual, family and social ethics. Our duties towards the environment flow from our duties towards the person, considered both individually and in relation to others"
(World Day of Peace 2010)

In Part 1 I suggested that divorce and homosexuality are taken as test cases, modernist thinking see's affirming them as being necessary to their project of maximising human happiness through maximising human independence. But, since we are dependent creatures independence necessarily has its limits. In relation to God we cannot be independent, in relation to each other we should not be independent. This is not to say that there is not a place for human privacy, for solitary communion with God and with our own souls. Christ Crucified was alone and, for the most part silent so we can deduce another human feature to be 'Man is an individual.' Again, though, this is a qualified truth which needs to be considered together with the truth's of dependence and sinfulness. Given these truth's maximising independence under the illusion that autonomy is either achievable or desirable is simply going against the grain of what human nature actually is. That we may, or many of us anyway, may want this license to behave as we will is a sign of our sinfulness, not of our inborn thirst to be free from the constraints of obligation which love when not disordered by sin places upon us.

The Catholic arguments, then, against divorce and homosexuality proceed from the assumption that these are lesser goods which disordered affection places above Good as such which we should be pursuing. The family, open to new life, nurturing and caring for existing life, centred upon the married couple is the basic human unit which is divinely designed to meet human needs and allow for the most optimum flourishing of the human spirit. All human life, even celibate life, is ordered around the family to support it by deeds, sacraments and prayers. Anything which seeks to dissolve this unit institutionally or legally is an enemy to real human freedom because it strikes at the roots of real human nature.

Of course, because of the ever present reality of human sinfulness many human families fall well short of their potential and can sometimes become the source of real suffering, torment and cruelty. 'Man is a creature who suffers' is another vision we see in the mirror of Christ Crucified. Suffering and sorrow is an inescapable part of the human condition, no structures or reconstruction of society will end that because all of them, each of them, will be corrupted by the sinfulness of the humans who run them if not in the beginning then certainly by the end. The most we can do is create the best possible structures, inculcate the best possible values in our children and young people and offer fervent prayers to our merciful God. Structures which uphold the family but which minimise the suffering caused by dysfunctional families or by disordered sexual desires through offering protection against violence, bullying and unjust discrimination offer better possibilities for humans to fulfil their potential as people who are loved and lovable, sinners and lovers, dependent and individual, capable of suffering than those which sweep away all these truths and replace them with the falsehood that humans are autonomous individuals and that individual love, unpredictable and changeable, should always win.

The painting is Crucifixion (Escorial) by Rogier Van der Weyden