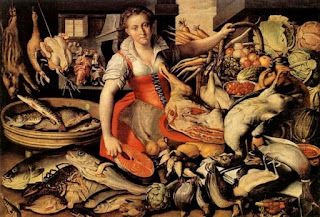 In the multitude of my thoughts within me thy comforts delight my soul.
(Psalm 94:19)

Martha, Martha, thou art careful and troubled about many things: But one thing is needful:and Mary hath chosen that good part, which shall not be taken away from her.
(Luke 10:41-42)

Both David (the psalmist) and Jesus draw a contrast between the drain on resources caused by multiplicity and the peace to be derived from simplicity. David describes an internal environment and Jesus an exterior one but, of course the two are intimately linked.

Martha's busy-ness was concerned with the tricky task of being a good hostess for an horde of visitors which meant having to juggle several balls in the air at the same time. Mary was simply concerned about sitting at the feet of our Lord and learning from Him.

Anyone who has tried meditating will recognise David's description. Our body may be as still as Mary's but our mind is, like Martha, bustling around like a shuttlecock from one thing to another and, very often, back again. The key difference, though, is that Martha's activity is purposeful and useful whereas the thoughts rattling around inside our head are often neither. Both of the sisters are focussed on Jesus, just in different ways. A contrast is often made between Mary as emblematic of the contemplative life and Martha of the active one. This is true so far as it goes there is, however, what Al Gore would no doubt call 'that little known third category' where action follows contemplation.

Had Martha sat at the feet of Jesus before performing her hospitable tasks then her multiplicity would have been secondary to her simplicity. Not simply second chronologically but also she would have become in some sense detached from her actions, performing them diligently but with a part of herself still dwelling by her Lord. Because, however, she performed them as an alternative to listening to Him then her affection for Him and desire to hear His words were among the other balls she was juggling and not always appearing as the most important ones either. Nonetheless, focussed or unfocussed both Martha and Mary were primarily motivated by love of Jesus and  'love covers a multitude of sins.' (1 Peter 4:8)

What David describes is a mind juggling umpteen balls at the same time and a soul delighted by the comforts of God. As I mentioned in a previous blog (Repentance-Why Bother?) words change their meaning over time. The 17th century translators of the Authorised Version understood comfort to mean something different from what their 21st century readers might suppose. At its root is the same word used in fortress, fortification, fortified and the like. Literally it means "strong together" and would have been used in the sense "strengthen greatly." So David should be understood to be saying something like "In the multitude of my thoughts within me thy strengthening helps delight my soul."

Listening to Jesus would have given Martha strengthening help that would anchor her in simplicity whilst she was busily doing many different things. Her multiplicity would have proceeded from a unity and returned to it. By not listening she discovered herself to be in the midst of multiplicity longing for simplicity but without the strength or wisdom to find her way to it.

Divine comfort, which is an action of the Holy Spirit, will nor necessarily stop any of that (although on rare occasions it probably will) but it will change the way we experience the phenomenon. We can be Martha's without the angst. This multitude does not possess the power to command our attention, all that it can do is request it. Hard as it may be to believe we do have the ability to refuse those requests. Letting thoughts pass us by without our focussing upon them is only an effort if we have nothing else to focus upon. And the Spirit giving 'delight to my soul' is a powerful counter-attraction.

The advantage that Mary possessed was that she was fully aware of the presence of Jesus. He filled her sight, her hearing, her mind and her heart to the exclusion of all else. We are seldom so obviously blessed.Yet, nonetheless, if we have made the basic decision of faith in favour of Christ and His Kingdom and if, where possible, we have been strengthened by the sacraments then He is a permanent guest within our own hearts. Only unrepented mortal sin can drive Him away from us. And if He is within us then we, if we listen (which is the one thing needful), can hear Him always. And that is a comforting thought.