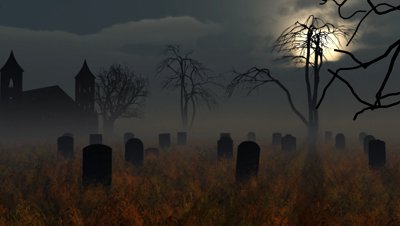 She was a very modern vicar. Traditions and superstitions that got in the way of kindness and tolerance were discarded by her for kindness and tolerance were her religion. Being thoroughly modern she made no provision for technological failure. So when, one November evening, the electricity failed she was at a loss about what to do. Eventually she remembered that there were candles in the church and she dug out the torch left by her predecessor and set out from the presbytery.

The wind was blowing dead autumn leaves across the churchyard. Like shrouds they piled up against the West side of the gravestones. The owls and the rodents had resumed their nightly battle of wits with violent death as the stake. The vicar found herself muttering involuntary prayers as she hurried through and half-laughed at her reversion to the pre-modern little girl she had once been.

St Ælfric in the Marsh was an ancient building, it was already old when Henry VIII decided to change the religion of his people. It had seen many modern vicars in its time and many different modernities. It had spent more centuries without electricity than with it so power cuts did not unduly affect St Ælfric.The vicar stepped into the porch and automatically flicked the light switches in the vague hope that the church was on a different circuit to the presbytery. It wasn’t, the darkness was profound.

She pointed her torch in the direction of the Lady chapel, where people with a faith as ancient as that of the church they worshipped in still placed votive candles, and she started trudging towards it. After a while it occurred to her that she had been walking for a long time given that St Ælfric’s was such a small building. She flashed the torch round about her. Everything seemed normal and she guessed she must be about halfway between the porch and the chapel. More time passed and her brisk tread became hesitant. Once more she paused to inspect her surroundings. She seemed to be in precisely the same position as she had been before.
“I must be walking in circles somehow” she thought “It’s very strange.”

Touching the wall of the church with her right hand to keep herself straight she continued her unusually prolonged expedition prudently turning the torch off to save the dying battery. After a while she had to move the hand to help support the weight on her left shoulder. For a while she struggled on before she thought to ask herself what that weight might be and how it had got there. It seemed to her that she had been carrying it for a long time but she had no memory of how or when it came to be there. Kneeling painfully down she placed the thing on the floor and flashed her torch at it.

Slowly she moved the feeble light up and down, down and up and then down again. However often she looked at it it retained the same appearance. It was large and crudely made out of wood. It was a cross. The vicar gulped several times.
“Who needs candles anway?” she asked defiantly out loud and turned to make her way back to the reassuringly normal graveyard. Then she stopped. As clearly as if they had been spoken she became aware of the words-
“You can leave, but then you will never know the answer.”

She stood for a moment in the faint light from the stained glass windows. Several layers of modernity were shed. A choice was being made. Was she a woman of faith above all or was she a creature of technology and artificiality. Weeping slightly she turned again, picked up her cross and struggled on through the darkness. After what seemed long ages she sunk under the weight and sobbed without restraint. Then, a gentle healing presence surrounded her and slowly she stood up once more. Her burden had become lighter somehow. But the darkness was still dark and the way still seemed long.

Suddenly she let out an un-vicarlike expression. She had stubbed her toe on something. Carefully exploring the dark area in front with her foot she discovered that she was standing in front of a step.
“I must have veered off the way to the Lady chapel and come to the sanctuary instead.” she thought.
Firmly shouldering her cross she began to climb. More time passed. And then she found the light.