The Bible & The Virgin- Part 2

In this series I am looking at the evidence from Scripture Alone that shows why Christians have the duty and great privilege to give the Virgin Mary honour and praise. What I am not doing is looking at those Catholic doctrines about our Lady which cause Christians in the traditions of the Reformation (also called Protestants) to get fidgety. It seems to me that all traditions of Christianity could, if they chose, unite around the plain sense and literal meaning of Scripture where it shows to us the outstanding qualities of Mary and agree that here indeed we find an outstanding Saint of God. In Part 1 I  looked at the Annunciation of the Archangel Gabriel and the Visitation to St Elizabeth (and Zechariah.) Here I will begin by looking at the events around the birth of Jesus (traditionally referred to as the Nativity.)

This is how the birth of Jesus the Messiah came about: his mother Mary was pledged to be married to Joseph, but before they came together, she was found to be pregnant through the Holy Spirit
Matthew 1:18 (NIV)

The words 'found to be' in this context are one of those compact expressions which occur frequently in the Gospels. Because the words are few the temptation is to skim over them as being of little significance. If, however, we unpack them then we see that they cover quite a complex series of events. We know from the Visitation that St Elizabeth discerned the pregnancy of Mary because she had been inspired to do so by the Holy Spirit; our Lady herself did not tell her. Three months later she returned to Nazareth. By this time her condition was probably visible but, again, it seems that she did not tell anyone the cause, preferring to allow people to think what they would. This must tell us something about the personality and character of the Blessed Virgin. I think that we can deduce several major things about her from this episode. Firstly, she did not seek to make public what had been revealed to her in private, Mary was discreet. Secondly, she did not wish to make it known that she has been selected and granted the privilege, becoming mother to the promised Messiah, that all women in Israel desired to have, Mary was humble. Thirdly, she trusted that the God who had given her her unborn child would make sure that both she and He would be provided for, Mary had perfect faith that nothing was impossible with God. It might be argued that she kept silence for fear of not being believed but given that the penalty for adultery was death by stoning she had more to lose by silence then she had by speech unless God intervened, which of course He did.

It may seem like, in the words of a fine old English saying, a statement of the bleedin' obvious to say that Mary was present at the birth of her Son. And of course in one sense that is exactly what it is. As the series progresses, however, we will see that both the Virgin is present at a number of crucial moments in the history of salvation and that the Scriptures take the trouble to record the fact. What the Holy Spirit thinks worth including in the Bible Christians ought to think worth paying attention to. Mary was present when the Saviour entered the world or, to put it another way, the Saviour entered the world because Mary was present. We would know nothing about Mary were it not for Jesus but there would be no Jesus were it not for Mary. That is not to say that God could not have effected His purpose in some other way it is to say that the way He chose to effect His purpose was through and with Mary, the mother of the Son of God.

So they hurried off and found Mary and Joseph, and the baby, who was lying in the manger
Luke 2:16 (NIV)

If we believe that Scripture was inspired by the Holy Spirit, and those who hold that the Bible is the final authority can believe nothing else, then it behoves us to pay close attention to what it actually says. In most of Scripture when husbands and wives are listed the mans name comes first. Abraham and Sarah were already very old Genesis 18:11 on the (sexist) assumption that the man is the more important of the two. Moreover, the principle of listing the most important person first is followed in the Gospels where all the lists of the Apostles begin with St Peter and end with Judas the traitor. So, on that basis it is clear that the Spirit considers Mary to have precedence over St Joseph. If we hold, as some Protestants do, that the Virgin was simply a vessel to carry the unborn child Jesus and that her significance pretty much ended there then this listing would make little sense. If Joseph were to hold primary responsibility for raising the child and educating Him in the faith then Joseph would be first on the list. Clearly his male prerogative is secondary to the privileges granted to Mary.

Mary treasured up all these things and pondered them in her heart
Luke 2:19 (NIV)

St Luke makes several such references to our Lady and no such references to anyone else. Mary treasures these things and contemplates them in the very centre of her being. The Evangelist shows her to be a model of gratitude to God (she counts these things to be a treasure) and a model of one who meditates deeply on the things of God. Moreover he shows us that she is so to an unusual degree. We may have wondered why, in the Annunciation, Gabriel said that Mary had found favour with God here surely are some of the reasons. Mary's character has not changed because of pregnancy and childbirth, as she is now so she was before. Her grateful, prayerful way of being in the world is part of the reason why she has been chosen out of all of the daughters of Israel to be the mother of the Son of God. 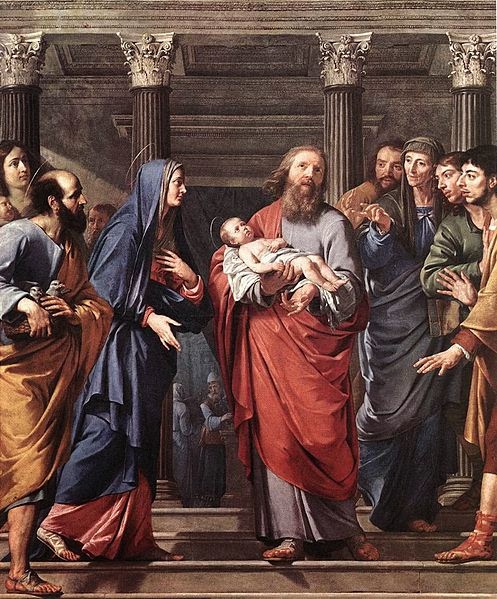 When the time came for the purification rites required by the Law of Moses, Joseph and Mary took him to Jerusalem to present him to the Lord
Luke 2:22 (NIV)

Here we can note that it has become 'Joseph and Mary' because when it come to fulfilling the requirements of the old law St Joseph has the privileged position, Mary's privileges depend entirely upon her Son. Also we can see that the Holy Family is scrupulous in fulfilling the requirements of that law despite the fact that it doesn't really apply to them, Mary does not require to be purified because she is pure, Jesus does not require to be circumcised or presented to the Lord because He is the Lord. Nonetheless, they show obedience to the law to avoid causing scandal and because the hour has not yet come to supercede it.

Then Simeon blessed them and said to Mary, his mother: ‘This child is destined to cause the falling and rising of many in Israel, and to be a sign that will be spoken against, so that the thoughts of many hearts will be revealed. And a sword will pierce your own soul too.’
Luke 2:34-35 (NIV)

Simeon blesses 'them' and then addresses Mary exclusively. We have moved again from old dispensation to new dispensation and once more Mary is foregrounded and St Joseph backgrounded. Crucially Simeon prophesies that a sword will pierce the soul of Mary. We learn from this just how greatly our Lady will suffer because of the Passion and agonising death of her Son. And we learn this about no one else. Certainly we can assume that St Mary Magdalen, St John the Evangelist, St Peter and many others were affected by the death of Jesus but the Holy Spirit, as it were, goes out of His way to inform us that Mary above all others will be afflicted with the afflictions which fall upon Jesus. And if the Holy Spirit wants us to know this then we should follow the example of the Virgin herself and treasure this knowledge pondering over it in our hearts.

On coming to the house, they saw the child with his mother Mary, and they bowed down and worshipped him
Matthew 2:11 (NIV)

This refers to the visit of the Magi. It might be considered that it is simply recording a fact and that Mary's presence is an incidental detail. However, it is recorded not that the Magi saw Jesus alone nor that they saw Him with St Joseph but that they saw Him with Mary. Seeing Jesus with Mary they worshipped Jesus. This is a clear sign surely that the presence of our Lady does not in any way detract from the glory of God. We can give Mary honour and God glory and it robs God of nothing to honour Mary as it robs Mary of nothing to worship God. What the Magi were able to do these two thousand years and more ago surely Christians can still do today.