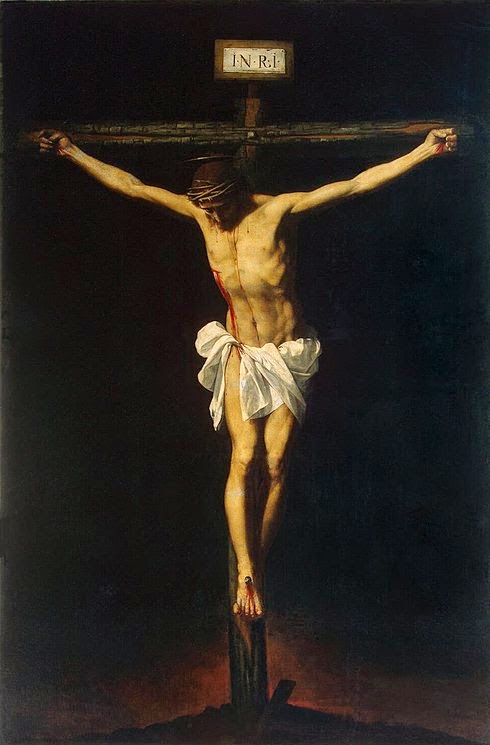 Look into this mirror every day, O queen, spouse of Jesus Christ, And continually examine your face in it.... that mirror suspended upon the wood of the cross
St Clare of Assisi- Fourth Letter to Blessed Agnes of Prague

We tend to think that the enquiry What is Man? (meaning female and male) is a philosophical question. The psalmist reminds us that it is also a theological one. In order to understand the relationship between humans and God it is necessary to understand the nature of each participant in that relationship. One significant difference between the two disciplines is that theology unlike philosophy regards the contents of divine revelation, such as scripture, to be part of the data it needs to consider. It appears to me, nonetheless, that since the time of the 'Enlightenment' Western philosophers have implicitly accepted that the propositions which theologians have advanced in answer to the question should form part of their philosophical first assumptions regarding Man. As Western societies become post-Christian, however, this is decreasingly the case. It is my contention that the more philosophers confine their considerations to merely human sources and propositions then the more inhuman their philosophies become so that a Culture of Death increasingly emerges.

This sounds counter-intuitive to everyone who isn't hard-core religious. Surely, the argument would go, nowadays we are more accepting of things like divorce and homosexuality? This must prove that philosophies have become more human by being less judgemental. Against this I would contend that these changes proceed not so much from compassion towards our fellow humans as from indifference about them. People can do what they like whether it makes them happy or not because freedom, conceived of as autonomy, not happiness is the major concern of human philosophy. We are permissive about others only because we wish others to be permissive about ourselves. Doing what we wish has priority over doing what is right because (a) that way we need acknowledge no external constraints upon our freedom and (b) there is no consensus about what is right. Against this I hope to demonstrate that the Christian answer to What is Man? provides the basic assumptions which we require to form a philosophy which is truly human in the sense of guiding humans to fulfil their essential natures as creatures whose purpose is not to be autonomous pleasure-seekers but to give of themselves in loving service to others.

For Christians, I think, the best place to start is not the beginning if by beginning we mean- 'Then God said, “Let us make man in our image, after our likeness' (Genesis 1:26) This is because the icon of God implied here is not Adam as archetypal Man but-  'in the image of God he created him; male and female he created them'. That is humanity as a whole is a reflection of God and each individual is only imperfectly such. In the figure of Jesus, Son of God and Son of Mary, however we see what it means to be Man and what it means to be God distilled into a single person. Thus we can avoid abstractions and come quickly to concrete definitions and propositions by fixing our gaze upon Him. More than that, St Clare (like many of the women who have taught the universal Church) showed great wisdom when she suggested that it is Christ Crucified who reveals ourselves to ourselves most fully. He does so, I would suggest, in two ways: as He is in Himself we get a positive vision of what Man is or should be and through Him as He is situationally we can make inferences about Man. 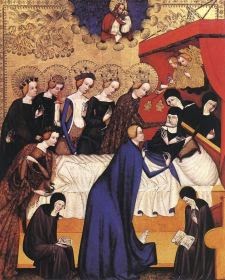 The Death of St Clare- Master of Heiligenkreuz

One aspect of our Lord's Passion is that it was voluntarily undertaken for the sake of liberating humans from bondage to corruption and death. We can infer from this that, since this liberation is offered to each human ever conceived, Man is loved with an extreme, self-sacrificial love. That is, every human person is the object of an infinite love. Further to that we may add that since it can be said of God that not only is He Love but He is also Reason (as mentioned in my post Why Be Moral?) this love is a rational love. Which means that it can be posited of Man that he is lovable. If we pair these things then one part of the answer to What is Man? becomes Man, individually and collectively, is loved and lovable from the moment of conception through to the moment of natural death and at every single point in between. If we accept this proposition then we must conclude that human life is a sacred thing just because it is human and for no other reason.

We can see here a contrast with post-Christian philosophies which could be summed up in relation to the social issues I mentioned earlier. A Christian philosophy would propose that we love divorced persons and homosexual persons. A post-Christian one proposes that we love divorce and homosexuality. The difference outcome flows from the different reasoning process. If the priority is to ensure the maximum independence of each person from every other person then almost anything which dissolves bonds, particularly the strong bonds which family creates, is welcomed. If, however, the aim is to simply love what is sacred, because it is loved and lovable, then a desire to strengthen not weaken bonds emerges. It might no doubt be argued that divorce and same sex partnerships are different ways for love to express itself and that in any event Catholicism has not in practice shown much love for divorced persons or homosexual persons. The latter point is only valid insofar as one reads it to mean that Catholics have not always displayed this love, philosophies are not always well served by their followers. The former point is covered by the next thing which is revealed about Man in the mirror of Christ Crucified.

The proximate cause of the Passion was human sin. It seems anachronistic to talk about sin in this era since the non-Christian population is largely divided into those who know what the word means but don't accept the concept and those who have no real idea what the concept actually is. So to say that another part of the answer to What is Man? would be 'Man is a sinner' requires some explanation. The Catechism defines sin thus- "Sin is an offence against reason, truth, and right conscience; it is failure in genuine love for God and neighbour caused by a perverse attachment to certain goods. It wounds the nature of man and injures human solidarity" Another way of putting it is that it is an exercise in radical autonomy, a putting of the desire of the self for some gratification ahead of all other considerations. Essentially sin is the practical application of a post-Christian philosophy stripped of its moral compass. The concept of solidarity is not one that is often adverted to in contemporary discourse because accepting it places one under the obligation of considering other persons before oneself. It has been used in the language of some political movements like socialism or nationalism but the Catholic understanding of it is a much deeper thing and it encompasses a network of relationships. Sin is that which intrinsically disturbs such relationships. Insofar as divorce and homosexual acts have those tendencies then they do not tend to human happiness and cannot be approved. These are issues which I hope to explore more fully in Part 2.