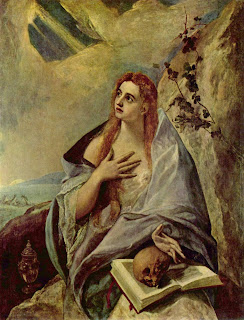 Most blessed lady, I who am the most evil and sinful of men do not recall thy sins as a reproach, but call upon the boundless mercy by which they were blotted out.
(St Anselm, Prayer to Saint Mary Magdalene and Our Lord)

From the early Middle Ages the Latin Church began to associate a number of different Gospel stories, the nameless woman who was a great sinner (Luke 7:36-48) and Mary of Bethany, with the figure of Mary Magdalene who had been first witness to the Resurrection of Jesus. Feminists, enemies of Christianity and liberal theologians always present this association as if it were a misogynist scheme by the old white men (now dead) of the Catholic Church to slut-shame a feisty independent woman disciple of Christ. As a plot it failed miserably since the Magdalene became, after our Lady, far and away the most popular female saint of the Middle Ages. This was not despite but because she was seen as a reformed sinner. Most Catholics then as now could empathise with one who had succumbed to temptation, especially sexual temptation, and saw in her redemption and closeness to Jesus a significant source of hope for themselves.

I, however, have an alternative theory. One of the things which the Gospel tells us about our saint is this- "Mary who is called Magdalen, out of whom seven devils were gone forth" (Luke 8;2.) This is immediately after the story of the unnamed woman so linkage is plausible but more importantly it features the number seven. To the modern mind this conveys nothing but in the ancient and medieval world it was charged with significance. The world was created in seven days, the seven seals of the Apocalypse will be a prelude to the end of days, the Israelites had to drive seven tribes out of Canaan, seven Apostles witnessed the risen Jesus by the shores of Lake Tiberias and so on and so forth. Therefore whenever this number appears in Scripture we are invited to ponder on what significance it may have. Often it is taken to imply fullness so when St Peter asked (Matthew 18;21-22) if he should forgive someone up to seven times a day he simply meant "as often as it is likely to happen."

Pope St Gregory the Great when he reflected upon it came to the conclusion that in the case of the Magdalene it referred to the seven mortal sins. That being so she became a perfect fit with the unnamed woman in Luke because of two things which the Gospel tells us explicitly about St Mary. Firstly, that she had been possessed but that Jesus had liberated her from that. Secondly, that she loved our Lord very greatly. This last was shown by her standing at the foot of the Cross during His Crucifixion. Indeed, the Magdalene is often depicted as wearing red and/or as having red hair. This is not, as some suppose, because of an association with prostitution, but rather because of her association with the Lord's Passion and death. More poignantly after His entombment her love is depicted in this passage by St John the Evangelist-
Mary stood at the sepulchre without, weeping. Now as she was weeping, she stooped down, and looked into the sepulchre, And she saw two angels in white....They say to her: Woman, why weepest thou? She saith to them: Because they have taken away my Lord; and I know not where they have laid him.  When she had thus said, she turned herself back, and saw Jesus standing; and she knew not that it was Jesus. Jesus saith to her: Woman, why weepest thou? whom seekest thou? She, thinking it was the gardener, saith to him: Sir, if thou hast taken him hence, tell me where thou hast laid him, and I will take him away. Jesus saith to her: Mary. She turning, saith to him: Rabboni (which is to say, Master)
(John 20:11-16)

So moving is this passage that it has resulted in many reflections upon it by saints, artists, poets and writers. St Anselm for instance wrote-
..And, more than all this, what can I say, how can I find words to tell, about the burning love with which thou didst seek Him, weeping at the sepulchre, and wept for Him in thy seeking? ...So, near to death and hating her own life, she repeats in broken tones the words of life which she had heard from the living. And now, besides all this, even the Body which she was glad, in a way, to have kept, she believes to have gone.
And can Thou asketh her, 'Woman, why art thou weeping?'
Had she not reason to weep?
...I think, or rather I am sure, that she responded to the gentle tone with which He was accustomed to call, 'Mary'. What joy filled that voice, so gentle and full of love....
..At once the tears are changed; I do not believe that they stopped at once, but where once they were wrung from a heart broken and self-tormenting they flow now from a heart exulting..

Jesus said of the nameless woman "Many sins are forgiven her, because she hath loved much" I think it likely that Pope St Gregory connected the idea of this woman's great love with Mary Magdalene's great love and her sins with the Magdalenes seven devils. Critics who focus on the sin forget the love but the Church never did. The idea that these two persons are one might or might not be right but the idea that they were linked in order to denigrate the great and much beloved St Mary Magdalene is most certainly wrong.
@stevhep

The paintings are Mary Magdalene by El Greco and Magdalene Mourning by Colijn de Coter.