Jesus Has Left The Building(s) 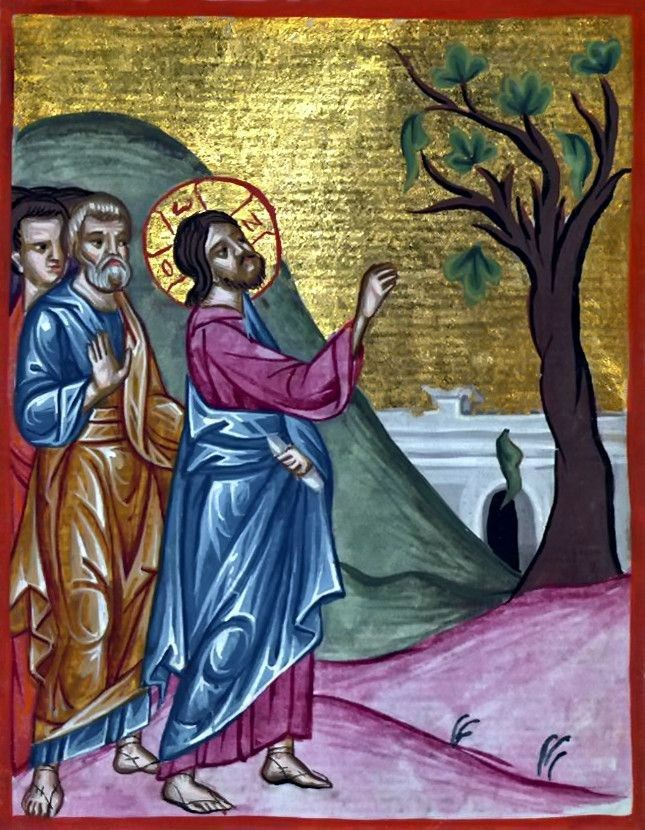 This verse is sandwiched between the two halves of the famous story of Jesus cursing a fig tree. The way that St Mark tells it; on the way into Jerusalem one morning our Lord, feeling hungry, sees a leafy fig tree and approaches it. Leaves are all it has however, it not being fig season, so Jesus cursed it saying 'may no one ever eat your fruit.' Then He goes into town and does some stuff. The next morning, the second half of the story, the Apostles and their Master find the tree withered to its roots.

Many people who read this story superficially find it quite disturbing. It seems entirely unreasonable to curse a plant for not producing fruit out of season. It makes Jesus seem like a proto-fast food junkie who can't wait to have things in due time. This would be to misread the episode however, our Lord's action is deeply symbolic and serves an eminently didactic purpose for those who have the key to interpreting it, as of course the first people to hear the Gospels did. It is not at all accidental that this incident occurs in the final week before the Crucifixion nor that He sees the fig tree while approaching Jerusalem.

The fig tree which has leaves but no fruit is an emblem of the religion of the Pharisees and the priests which promises so much but delivers so little, less than nothing indeed, to the people. Jesus approaches the Holy City home of the one Temple of God at the time of the holiest festival in the Jewish calendar hoping to find a nation ready to receive Him as Son of God and Messiah. This nation, and national religion, which God has cultivated lovingly since the time of Abraham will not only, in the person of its leadership elites, refuse to recognise Him but it will actively conspire against Him. This marks the end of that covenant based on the blood that runs through the veins of Abraham's children and its replacement by a covenant founded on the blood that spilled out of the veins of the Christ. The fig tree planted in Palestine will wither, the Cross planted on Calvary will flourish, no one seeking its fruits will be disappointed.

And amid all this symbolism we have the datum that Jesus left Jerusalem to its darkness. During Holy Week He seems to have spent His days in the Temple and, apart from the First Eucharist/Last Supper, his evenings outside of the city. We have no information to tell us why this might have been so. Clearly it did not make Him safe from capture, indeed, Jerusalem was full of Galilean pilgrims had He stayed where they were the authorities would not dared to have touched Him. I think that St Mark by placing the information where he does gives us a clue. Jerusalem has rejected Jesus so Jesus accepts their rejection and leaves them to endure without Him. There was no night worship in the Temple, no vigil services or Vespers, so when the Temple, the House of God, closes Jesus shakes the dust of Jerusalem from His sandals and departs until the House should once again re-open the next day.

Scriptures are not simply a record of history or a repository for symbolism, they speak to the particular condition of each person reading them. This verse tells us that Jesus leaves when darkness descends. This illustrates the doctrine that mortal sin drives Grace out of the soul. Jesus is the light of the world, by Grace He enters our souls and illumines them. But, if He is our guest we can have no other. If we invite into our city-soul greed or envy, anger or lust then darkness descends, evening comes and Jesus departs from the city. We are preparing to crucify Him anew and He accepts our rejection, He has granted us the power to expel Him. Unless we repent, confess and become penitent then our city will remain in the grip of the night, for our power is for our own darkness and our death, our submission is light and life.

It is not only true that Jesus departs when darkness comes to the city it is also true that darkness comes to the city when Jesus departs. The agony known as the Dark Night of the Soul is caused by this departing. Our Lord is a guest in our city-soul and all is light, we invite no others and yet somehow it seems that He has left. We endure emptiness and dryness, torment and temptation and it seems that we do so alone. This is a testing time in the life of a Christian. Our last state appears worse than our first. Then we did not know what we were missing and now we do. Then we were satisfied with shadows, taking them for substance, now we see that they are but empty shapes with no life in them. Our Lord chooses to make Himself present to us in the form of absence, His fullness consists of a void. We can but endure. He is uniting us to His Passion. We cannot fully put off our old humanity and be clothed with Christ until, with Him, we have learned to combine a perfect trust in The Father with the agonised cry of 'My God, My God why have you forsaken me?'

When Jesus comes to our city, or returns to it, there are no more evenings. "The city has no need of the light of the sun or the moon, since God’s glory is its light and the Lamb is its lamp" (Revelation 21:23) When the soul is the abode of our Lord then waking and sleeping, sleeping and waking our city is bathed in light and we are truly alive. Is such happiness possible for humans in this life or can we merely glimpse it from time to time and must we bide our souls in patience until, on entering eternity, we achieve this precious gift of divine union? "A great sign appeared in heaven: a woman, clothed with the sun, with the moon under her feet, and a crown of twelve stars on her head." (Revelation 12:1) Never, nor for the merest instant, did Mary cast Jesus out of her city-soul, nor did He cast her out of His. Full of grace means full of light, full of Jesus, no evening covered Mary's city with its shadow. In this she is our pioneer, our role model, our sign of hope. What she achieved she achieved by the grace of  God and by her wholehearted cooperation with it. We can set our hearts to a like cooperation and pray in faith for like graces and by the power of God we too can escape now and forever the power of darkness.