The Bible & The Virgin- Part 3 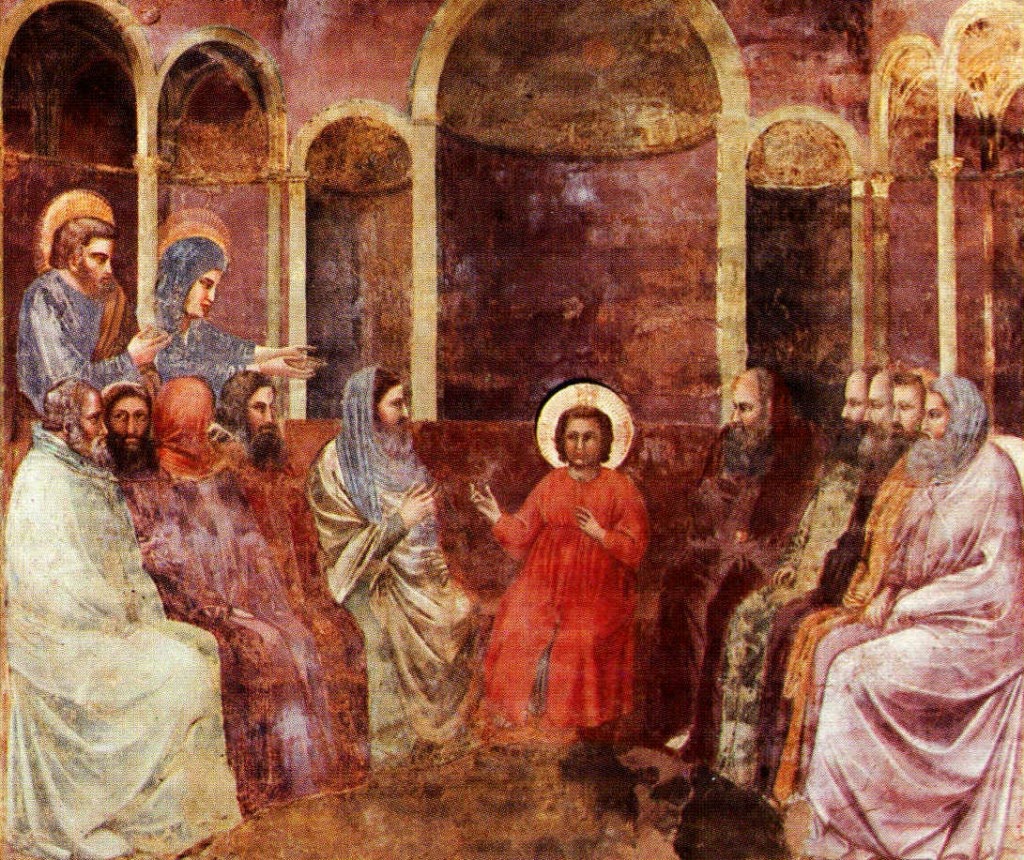 In this series I am looking at some of the New Testament verses which refer to Mary and considering what a reasonable Christian might deduce from them about her character and her relationship with God. Parts 1 and 2 have been on the receiving end of harsh criticism in some social media. Interestingly none of this relates to anything I have written but only to the things about which I have not written. A few Christians seem to have a fear that if we spend time considering what the Holy Spirit wants us to know about the Mother of Jesus then somehow this opens the very gates of hell. I can only say to them be not afraid and consider in your hearts in case you be found to be resisting the Spirit.

At the end of Part 2 we left our Lady with the Magi. St Matthew then records that the Holy Family spent some time as political refugees seeking asylum in Egypt before eventually making their way to Nazareth which was to be their home for many years. The next significant episode is recorded by St Luke when our Lord was 12 years old and became detached from his mother and foster father after a pilgrimage to Jerusalem. Eventually they find Him in the middle of discussions with the learned sages of the place;

When his parents saw him, they were astonished. His mother said to him, ‘Son, why have you treated us like this? Your father and I have been anxiously searching for you.
Luke 2:48 (NIV)

It is characteristic of Mary that the first thing that she does is to seek to understand why her Son as acted as He has done. She does not scold Him or display anger. She knows that what He does is always the right thing to be done but that knowledge, that faith, does not tell her why it is the right thing and so, in faith, she seeks that greater understanding from the only source from which it can come, her Son and God's Son, Jesus Christ. Faith is always a process of growth since we who are finite are growing in knowledge, understanding and love of God who is infinite. It is also characteristic of our Lady that she mentions St Joseph before herself. Mary's humility was such that her concern about her lost and found Son did not mask or obscure her sympathy for the anguish of her husband. She humbly named his concern before her own and her own anxieties could not prevent her empathising with the anxieties of others.

Then he went down to Nazareth with them and was obedient to them. But his mother treasured all these things in her heart
Luke 2:51 (NIV)

This tells us that Jesus was obedient to Mary and Joseph. What does this tell us about the kind of home in which the perfectly sinless one was raised? It tells us that the life that Mary and Joseph lived was one of purity and virtue, work and devotion to the God of Israel, had it not been so then Jesus, the sinless one, the Son of His Father in Heaven, would have been a rebel but with Mary and Joseph He had no cause for rebellion. It tells us too, I think, that Jesus loved His parents on earth. If Jesus loved them can we do any less? And if Jesus showed His love for them should we not do so also? In an earlier post, Mary and Christian Meditation, I reflected on the fact that our Lady treasured these things "The temptation for us here is to say 'she did not understand but she treasured it anyway.' There is no but however. She did not keep the words of Jesus because she understood them nor because she failed to understand them. She kept them because they were the words of Jesus, she needed no other reason". Mary loved her Son and knew very well what His origin was. When these facts were the only ones she had to go on they were more than enough for her as they should be for us also. Understanding may come, indeed it is right to hope that it will come and to seek out all knowledge that will help us to come to it. Nonetheless, where understanding fails us love can still find a way to the truth. Mary is our example in this as we can see from this Scripture. 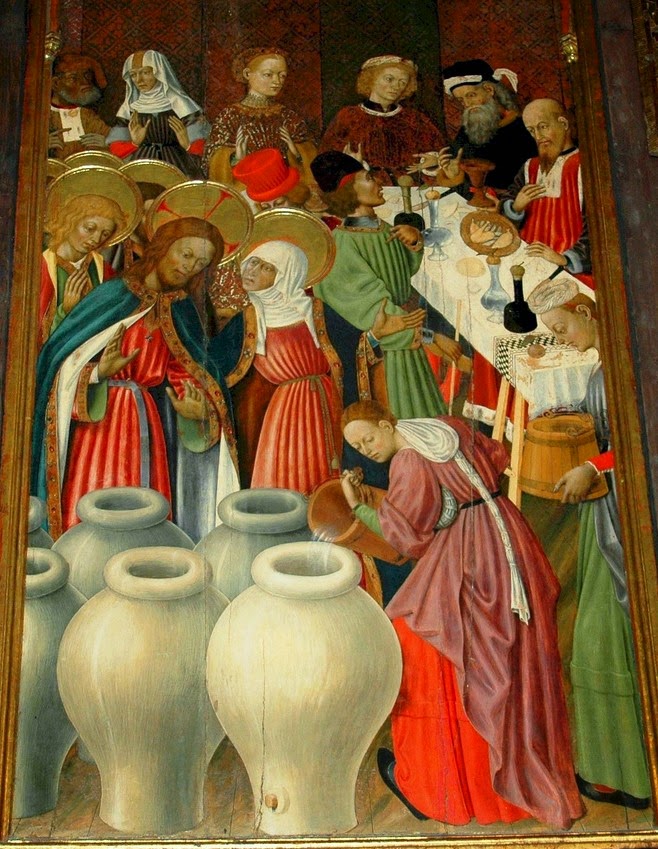 On the third day there was a wedding in Cana of Galilee, and the mother of Jesus was there.  Jesus and his disciples had also been invited to the wedding.
John 1:1-2 (NRSV)

In Part 2 I mentioned that the Gospels often compact an awful lot of information into a very few words. Here we have another example of this. St John seems to go out of his way to tell us that Mary was at the wedding before mentioning Jesus. The obvious deduction is that Jesus was invited because He was the Son of Mary and that St John records this because it is a fact that the Holy Spirit wants us to know and consider. Christians of all traditions are clear that where Jesus goes Mary follows; from this we can learn also that where Mary goes Jesus too follows. Those who are wary of giving honour and praise to our Lady because they think that it somehow separates them from our Lord and detracts from the glory of God should learn from this that it does nothing of the kind. Mary goes nowhere that Jesus would not be happy to follow her to.

I would suspect that we could read this account dozens of times before asking the question 'why did the wine run out?' It is reasonable to suppose that the cause is to be found in the poverty of the newlyweds. Had they been well to do then either they would have been well stocked to start with or they could easily have bought in extra supplies when they needed to. That Mary was invited to a wedding of the poor tells us something about her and her life. That she noticed that the wine had run out and sought to do something about it straight away tells us something too. Our Lady was concerned that this lack would shame those who invited her and she cared a great deal about this. Mary was one who fulfilled the commandment 'love your neighbour as yourself.' It should also be noted that wine is not a necessity at a wedding (although many of us might think that it is) neither is it a luxury, it is one of those little extras that make life pleasant. Mary was concerned that the guests should enjoy the wedding and be glad and in that she shows us that she is kindly and very human.

Many Christians, particularly those in the Reformation traditions (also called Protestants), think that the word 'prayer' has a specific connection with worship, that is all prayer is also worship. Flowing from this is the belief that prayer should, therefore, only ever be addressed to God. Words do change their meaning over time and it may be that prayer will one day come to have that exclusive idea firmly attached to it. It was not always so and even yet it is not entirely so. 'To pray' can simply mean 'to request'. We can see this, for example in a 2014 episode of Sherlock where "pray silence for the best man" is said just before Holmes makes an ass of himself and solves a crime at the same time. What all this is leading up to is that Mary here is praying to Jesus in that sense of the word. In doing so she gives us a model for all prayer directed to Him. She makes no demand. Her words are short and to the point. She draws His attention to the fact, they have no wine, and leaves to Him the disposition of the situation. And of course having heard His mother's prayer Jesus answers it. It is sometimes argued by Protestants (and New Atheists) that His apparent reluctance to respond is somehow a rebuke to our Lady. Yet, surely, the whole point of prayer is to effect a response from God that we feel would not have been made had the prayer not been uttered. Strict justice would leave the bride and groom to suffer the consequences of them inviting too many guests and providing too little wine. Mercy flowing from the prayer of Mary and the graciousness of Jesus' response leads to wine of superlative quality in eye-watering quantity. Prayer works and the prayer of Mary works very well indeed.

His mother said to the servants, ‘Do whatever he tells you.’
John 2:5 (NRSV)

It is, perhaps, easy to overlook the fact that the servants obeyed Jesus because they were obedient to Mary. However, it does seem to be so and again it is worth reflecting on why the Holy Spirit might want to inform us of this. Be that as it may we can learn certain things about our Lady from these few words. Firstly, she knew that Jesus was bound to answer her prayer without Him having specifically said that He would. Mary not only had perfect trust in her Divine Son but she knew that He loved her so much that He could not refuse a request from her. Second, she counsels those who listen to her, and all the subsequent generations who have read the Gospel according to St John, to do what Jesus Himself later says is a mark of His true disciples ‘If you love me, you will keep my commandments'. John 14:15(NRSV) At the beginning of His mission Mary intuits what Jesus reveals to His closest followers only at the Last Supper.


After this he went down to Capernaum with his mother, his brothers, and his disciples
John 2:12 (NRSV)

I think there is a tendency for Christians to think that after the Baptism in the Jordan and the 40 days in the desert that Jesus cut loose from home and became straight away the 'Son of Man who has nowhere to lay His head.' Here the Evangelist lets us know that Mary is still important to Him she, through her prayer, brought about His first public miracle and she accompanies Him to Capernaum where the Synoptic Gospels tell us He began His public preaching, teaching and healing mission. I said in Part 2 that the Scriptures take the trouble to record the presence of our Lady at key moments in the history of salvation and here are two of them in Cana and Capernaum. There will be more.