Doing Good Because It Is Good? 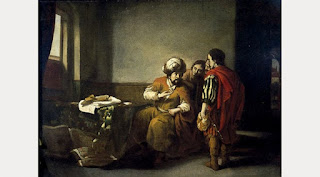 Was it not thy duty to have mercy on thy fellow servant, as I had mercy on thee?
(Matthew 18:33)

It is sometimes argued that we should do good simply because it is good and not out of any desire for reward or fear of punishment. And, it is frequently added, the most powerful force preventing people from doing good is often religion. Although the argument is superficially plausible it contains multiple flaws.

One of these is the assumption that 'Good' is a category which is immediately obvious to all and that everyone shares the same understanding of it. That being so, where Good is 'common sense' or a thing that 'stands to reason' or an inherent 'natural' quality, then only an irrational counter-balance, like religion, can lead people astray. But it is not so. I propose to look at three concepts, Forgiveness, Mercy, and Duty, to make the point more clearly.

The philosopher Hannah Arendt, who was no Christian, wrote "The discoverer of the role of forgiveness in the realm of human affairs was Jesus of Nazareth" This does not mean that the concept had no prior existence what it suggests is that Jesus injected it into the everyday practice of ordinary people in a way which had not previously occurred. Rather like rock and roll existed before Elvis but until he released the single Blue Suede Shoes it did not enter the American mainstream.

Forgiveness is not a 'natural' reaction. Retaliation is the impulsive response to injury. While a case in Reason can be made to justify forgiveness one at least equally strong can be made to justify its opposite. So, a decision has to be made as to which of these is Good and it is by no means obvious to 'common sense.' Arendt put it like this "The freedom contained in Jesus’ teaching of forgiveness is the freedom from vengeance, which incloses both doer and sufferer in the relentless automatism of the action process, which by itself need never come to an end." This is a fairly subtle point, albeit a significant one, and would not have entered into the current of daily life in the West had it not had a powerful agent promoting it. By which I mean, specifically, the Catholic Church.

The case may become clearer if we consider Mercy. Unlike forgiveness which anyone can practice Mercy is a quality which only the powerful can exercise. It means restraining that power when one could use it, not because such restraint benefits the strong one but because it benefits the weak one. Again, this is not something obvious to 'common sense' In ancient thought, summarised by Thucydides in the Melian Dialogue, it was held that the strong ruled because they could and the weak obeyed because they must.

Christianity introduced the idea that even the very powerful are themselves recipients of Mercy from God and if they desire to continue to receive that Mercy then they must themselves be merciful. Once more, the concept of mercifulness existed apart from the Church. The Stoic Seneca, who was to the Emperor Nero much like Steve Bannon is to President Trump, wrote an essay on Clemency. But the suggestion was not that Nero was under a binding obligation to be merciful simply that it befitted him as an adornment to his rule, nor was the principle capable of infinite extension to everyone with the least little power over another human being.

The Christian notion that we should give mercy and forgiveness because we receive it does not come from the realm of 'common sense' or 'nature.' There is no 'because' to be logically derived from a set of relationships where A receives mercy from B and then mercilessly denies a request for mercy from C. Why should A be merciful to C, from whom he has received nothing, just because B has given him something? Well, because he has a Duty to be merciful. But this Duty does not emerge from the realm of pure thought alone, it comes from the spiritual realm, that is, it is a religious Duty.

For more than a thousand years almost everyone in the West frequently repeated the words "forgive us our trespasses as we forgive those who trespass against us." More than that from early childhood they were catechised into owning these words, into making them a reality in their daily lives. They became and have remained part of the furniture of the Western mind and Western sentiment. If they now appear to Westerners as 'common sense' it is not nature which has effected this level of understanding, it is the Christian Church, it is Jesus Christ.

At its highest possible expression Absolute Good is not a series of propositions we can deduce from our immanent surroundings. It is a transcendent reality which we encounter. God is Absolute Goodness and if we have a duty to do Good apart from considerations of reward and punishment it is because God is Good not because we are.
@stevhep

On my *other* blog I have looked at this from another angle in- Are Atheists More Moral than Christians?

The painting is The Parable of the Unmerciful Servant by Barent Fabritius.