Mary & the Poets: 2 Nativity of Our Lady 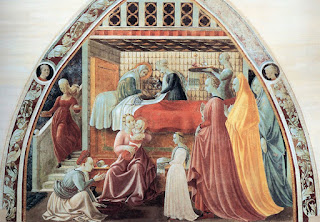 Joy in the rising of our Orient star,
That shall bring forth the Sun that lent her light,
Joy in the peace that shall conclude our war,
And soon rebate the edge of Satan's spite,
Lodestar of all engulfed in worldly waves,,
The card and compass that from shipwreck saves

The poet, (faithfully Catholic) Jesuit priest and martyr St Robert Southwell wrote a series of fourteen poems about the Blessed Virgin. This is the second of them and it is about Mary's birthday. The tone of the first stanza is celebratory in a twofold way. It firstly rejoices in the present birth of a girl child. Secondly it anticipates the mission which Mary will fulfill.

In poetry every word matters so when Southwell uses 'joy' (present tense) and 'shall' (future tense) twice in three short lines he has a purpose. Mary is a gift to us in herself and we should rejoice in her for herself, she is also the chosen one through whom comes the Saviour who will cause us to experience joy eternally. And in saying 'the Sun that lent her light' the poet reminds us of something that Our Lady herself never forgot that she is what she is because of the merits of her Son. For this reason the verse ends by highlighting that one of her roles is to act as the Star of the Sea that shines out for us through the storms of life leading us toward the safe haven of Jesus Christ.

The Patriarchs and Prophets were the flowers,
Which Time by course of ages did distill,
And culled into this little cloud the showers,
Whose gracious drops the world with joy shall fill,
Whose moisture suppleth every soul with grace,
And bringeth life to Adam's dying race.

Past, present and future are linked in the second stanza where Southwell sees Mary and the child she will have as having been prefigured in the Old Testament, as living in the Gospel times and as changing all human life thereafter in both time and eternity. He uses an image for Our Lady, which he had previously introduced into his poem on the Immaculate Conception, as 'Elias' little cloud.' This is the episode in 3 Kings 18 where the report that 'There is a cloud as small as a man’s hand rising from the sea.' was a prelude to a welcome fall of rain which ended a prolonged and killing drought.

St Robert in this stanza is pointing us to Mary's role as mediatrix of grace. The Father wills that through her hands shall flow the gifts of the Spirit that the merit of her Son has sent upon the world. It is grace that brings us to true life. Not only will it lead us to the kingdom of heaven after death but it enables us to live in the realm of light now in this life as brothers, sisters and children of Jesus the firstborn and, crucially, of all our neighbours too, good and bad alike.

For God on earth she is the royal throne,
The chosen cloth to make his mortal weed,
The quarry to cut out our cornerstone,
Soil full of fruit, yet free from mortal seed,
For heavenly flower she is the Jesse rod,
The child of man, the parent of a god.

The English language has changed somewhat in the more than four hundred years since this poem was written so some of its images are less startling than they may at first appear. The expression 'widow's weeds' is still used sometimes and reminds us of a time when the word 'weeds' referred to clothes. It is, I think, derived from an old English word  "Waed" meaning "garment." The point being, in any event, that Jesus became our Emmanuel, God-with-us, because He was clothed with Mary's flesh, filled with Mary's blood and received His first nourishment from Mary's milk. The mystery of God's incarnation as Man, fully divine and fully human begins with His initiative but is crucially dependant upon Our Lady's assent and cooperation. This girl child will one day utter the words which will allow the Eternal One to enter time and conquer death.
@stevhep

The painting is Birth of the Virgin by Paolo Uccello