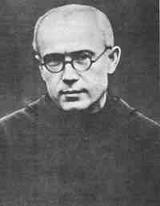 If the story of the Christian faith is about suffering, death and the power of God in the resurrection then the 20th Century story of Nagasaki and Auschwitz is about suffering, death and the power of Man in destruction. Maximilian Maria Kolbe, a Polish Franciscan Priest, in a unique way embraced both places. With his life he witnessed for the Christian faith in the first and with his death he witnessed for precisely the same faith in the second. He displayed the hope that is present and gives added joy to the springtime of peace and the hope that is present and gives the only joy in the winter of unchecked human cruelty and evil passions. Some will see this as no more than a great sign that, at its best, the human spirit is indomitable. Believers will see in it the power of God's Spirit at work in the hearts of men.

During his time in Nagasaki Father Maximilian was responsible for the creation of a monastery whose location subsequently enabled it to escape the force of the nuclear blast that destroyed that city. It remained, it endured, it was a sign of hope amidst devastation and destruction. In Poland he and many of his Polish Catholic colleagues gave hope to the thousands of Jews whom they sheltered and for whom he was incarcerated in Auschwitz. Finally on earth he gave hope to the man whom he volunteered to replace as a victim of reprisals by camp authorities for a presumed escape. After three weeks of starvation he was finished off by an injection of carbolic acid.

At Father Maximilian's canonisation John Paul II said http://www.theworkofgod.org/Saints/Lives/MaxKolbe.htm "Maximilian did not die but "gave his life...for his brother." In that death, terrible from the human point of view, there was the whole definitive greatness of the human act and of the human choice. He spontaneously offered himself up to death out of love." The Saint went to Japan not because it would benefit himself in any way at all but because he believed, rightly or wrongly, that proclaiming the Good News about Jesus and about devotion to Mary Immaculate (the great love of Maximilian's life) would be of immense service to the Japanese people. He and his colleagues offered shelter to Polish Jews not because this would bring some benefit, on earth or in heaven, to the Franciscans but because it was the right thing to do. And he offered himself in exchange for a married man and a father because dying for love that life may more abundant is the Christian way.

In the life and death of St Maximilian we see an icon of Jesus Christ. There are those who ridicule the whole "saint making" process of the Catholic Church seeing in it a presumption on the part of the Church in dictating to God who can or cannot be in heaven. This is a fundamental misunderstanding. The process of canonisation is not about putting people into the Blessed Place, it is about discerning some of those whom God has already placed there and then celebrating the fact. Most importantly it is first and foremost about those of us still here on earth. Each canonised saint is in one way or another, like St Maximilian, an image of Jesus. By studying their lives and imitating or admiring them we can grow ever closer to the Divine original. This is one reason why Blessed John Paul II presided over so many canonisations. By presenting to modern people modern saints, to indigenous people indigenous saints, to the disabled disabled saints to the lost saints who eventually became found the Church makes clear that Jesus because He is unchanging is unchangingly relevant in a changing world. He is hope without end especially to those whose hopes have been ended by human injustice and sin.

This is the original of the article published at The Guardian
Join the debate on my Facebook page http://www.facebook.com/CatholicScotBlog