Anteaters & The Aphrodisiac of Doom 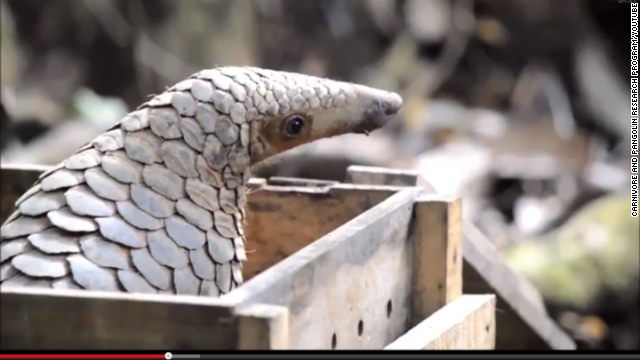 God blessed them and God said to them: Be fertile and multiply; fill the earth and subdue it. Have dominion over the fish of the sea, the birds of the air, and all the living things that crawl on the earth.
Genesis 1:28

Christianity often gets a bad press from secular environmentalists, ecologists and conservationists (hereafter referred to as Greens.) This is at least partly down to the perception that Christians justify humanity's total domination of the planet and, related to this, have the notion that humans form the apex of Creation and possess therefore an innate superiority to all other creatures upon our common planet. I propose to argue that these two propositions do not carry the meaning that Green critics suppose that they do. St Francis de Sales wisely recommends that meditation should always be followed by a firm practical resolution to turn the subject of meditation into concrete action. With that in mind having dealt with the Christian relationship to the environment I shall look at the test-case of the scaly anteater and why Christians should act strongly in its defence.

Most people probably understand 'Dominion' to mean something like 'the unfettered freedom to do whatever you like to those subject to your power.' This being so it is hardly surprising that Greens look at a theology of human dominion over planet earth with horror. However, this is to misunderstand the Christian conception of dominion which is radically different from the foregoing. I think there are two important considerations to bear in mind here, firstly that the primary model of dominion is that offered by God Himself and secondly the paradigm of dominion which Scriptures offer us through the narrative form of the Eden story.

The philosopher Simone Weil rather startlingly suggest that one way of looking at Creation is as a process of withdrawal by God. He allows a space to emerge in which life other than His own can exist and act without being so oppressively aware of His presence that it becomes overwhelmed  by it. That is, the root of freedom is an act of self abnegation by God. He chooses to exercise His dominion precisely by not fettering those over whom He has dominion. It is true that from time to time He does intervene in the history of His Creation but only with the intention of guiding it into certain paths which are for its benefit and never does He override the free will of His subjects who always retain the possibility of rejecting His guidance. Given that this is the Divine model for human dominion then clearly any approach to the environment which is based upon a rapacious and selfish approach to our planet as nothing more than a resource to be plundered is contrary to the mandate which God has given us to act as in a sense His Vicegerents upon earth.

In this context the question about whether the story of Eden is factual or not is entirely inconsequential. What it presents us with, Christians believe, is a divinely sanctioned paradigm for the exercise of human dominion over our environment. The Catechism of the Council of Trent gives us this picture of it-
Man's soul He created to His own image and likeness; gifted him with free will, and tempered all his motions and appetites, so as to subject them, at all times, to the dictates of reason. He then added the invaluable gift of original righteousness, and next gave him dominion over all other animals.
So the dominion is conditional upon several things, that is to say it is fettered. Man (short for humanity) must act after the image and likeness of God as outlined above. Man must be subject to the dictates of reason not to those of appetite and immediate gratification. Man must act righteously that is to say justly, mercifully and virtuously. Then, and only then can he exercise dominion over his fellow non-human creatures. It should, moreover, be borne in mind that in the prelapsarian model Man, and indeed Tiger and Anteater, were vegetarian. The role given to Man in Eden was to cultivate and care for it. (Genesis 2:15) The consequence of the entrance of Sin into Paradise and the Fall of Man was to leave Man with Original Sin in place of Original Righteousness but this did not cancel out the conditions by which he was to exercise dominion. Any attempt to use the environment as merely an instrument for Man's appetite without reference to the image and likeness of God present within him or the dictates of reason or the requirement to act righteously is gravely sinful and thus in no way morally permissible. In this way then we can see that the Christian conception of dominion, at least so far as its everyday objectives are concerned, however different it may be from secular Green philosophies does not constitute an insuperable barrier to close cooperation between secular and Christian Greens.

It would seem however that there is an unbridgeable gap between the notion of Man as the apex of Creation and one that proposes that the ontological and axiological difference between men and other living beings be eliminated, since the biosphere is considered a biotic unity of indifferentiated value. Thus man’s superior responsibility can be eliminated in favour of an egalitarian consideration of the “dignity” of all living beings. (Environment and Health, Pope St John Paul II.) This is a non-negotiable for Christians in the sense that Man and only Man (on this planet at any rate) is made in the image and likeness of God and, moreover, through the Incarnation of Jesus as Son of God and Son of Mary, God has taken the nature of Man alone among His Creation into the essence of His own being for eternity. Thus Man has a privileged relationship to his Creator which no other species on earth shares in. This enables one to deduce that it was for the benefit of Man that much of the rest of Creation was created and it was certainly almost exclusively for the benefit of Man that Jesus was incarnated. But if we view this from the negative side of the picture, from the consequences of the Fall, then we can arrive at practical conclusions which certainly harmonise well with many of the concrete concerns and demands for action of the secular Green movement.

Only Man has the capacity to consciously and deliberately destroy this or that part of the environment or species or indeed the whole of our shared planet. Only Man is capable of becoming aware that the unintended consequences of his activity will have destructive consequences but yet deciding to continue these activities with a reckless disregard and an indifference both to those with whom he shares the planet and future generations of his own species. Only Man can lie to himself about the effects of his own actions and use the lie as a justification for continuing. In short if Redeemed Man is the apex of Creation sinful Man is its nadir. It is therefore the duty of Christians to struggle against the sinful propensities of Man and to defend with a passion all that God has entrusted to us to defend. The development of a well balanced Christian approach to the environment rests not so much upon a vaunted boast of superiority as it does upon a struggle against Mans tendency to degrade himself as a prelude to degrading all that surrounds him.

And wandering into all these theological abstractions, for all the world like hobbits pursued by Nazgul, comes the humble scaly anteater or pangolin. Described as a timid and strange looking creature who resembles a walking artichoke or, more succinctly, as a scaly critter the pangolin is the most illegally trafficked mammal in the world. Of the 8 different species of pangolin in the world 2 are 'critically endangered' and all 8 are 'threatened with extinction' according to the IUCN Red List. And why has this come about? They are being slaughtered on an industrial scale for two reasons. To provide an expensive 'treat' for gourmets to eat and to have their scales turned into an aphrodisiac for use in Chinese traditional medicine. An aphrodisiac? How does that work? Well, it doesn't, the scales are made of keratin the same stuff you would find in your fingernails. So if keratin was really an aid to an enhanced sex life (clue: it isn't) then we could obtain large supplies of the stuff without destroying a million wild animals over several continents.

So, from a Christian perspective, lets look at what is motivating this extirpation from the planet of some of God's finest handiwork. Greed for a meat which we don't need and can well do without. Lust for evermore exciting sexual experiences. Stupidity for believing we can get the last named thing from fingernail like substances. Greed and Lust are sins and while stupidity isn't sinful as such it becomes so where it is wilful and blind to the obvious. It was said by Macaulay “The Puritans hated bear-baiting, not because it gave pain to the bear, but because it gave pleasure to the spectators.” however that might be one reason that Christians have for supporting the campaign to save pangolins is that the campaign to destroy them proceeds from motivations that are wholly unworthy of redeemed mankind. More than that though, we have a species, or 8 species, created by God, loved by God and playing their role in maintaining the biodiversity willed by God which is being wiped out of existence for no good reason. This cannot but be contrary to the will of God and an abomination to all right thinking people.

The philosophical differences between secular Greens and Christians, whether they classify themselves as Green or not, are substantial. Nor, ultimately, are they reconcilable to each other springing as they do from widely different starting points. Different need not, should not, mean hostile. Whatever ultimate ends we are working towards our proximate objectives in many instances are identical. Christians should not steer clear of activities geared at saving the biosphere in whole or in part because these activities are led by non-Christian or even anti-Christian forces. Nor should secular Greens allow their disdain for Christian beliefs to overflow into their rhetoric and activities in such fashion that they deter potential allies unnecessarily. Or, to put it another way "'Come, come!' said Gandalf. 'We are all friends here. Or should be; for the laughter of Mordor will be our only reward, if we quarrel."-[ Lord of the Rings-Book III, Chapter 6] 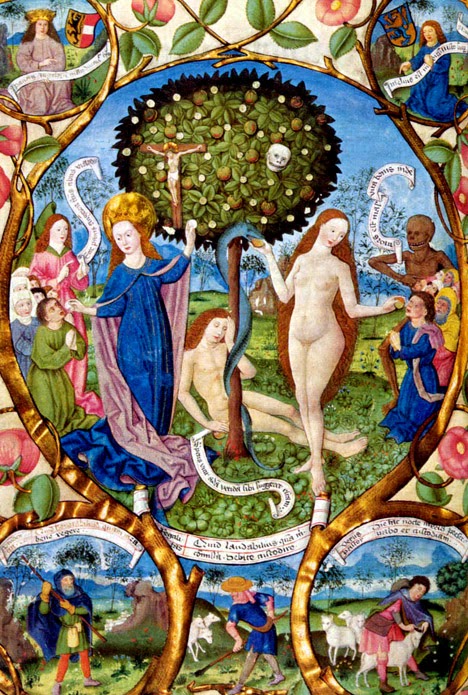 Tree of Life and Death from the Salzburg Missal

From the earliest centuries of Christianity Mary the mother of Jesus has been acclaimed as the New Eve. The Garden entrusted to our first parents fell into corruption and decay because of sin. Mary, who knew no sin, has been entrusted with the redeemed environment. The Father entrusted into her care His Son. She loved Jesus for the sake of the Father and for His own sake. She gave of her substance to Him and devoted her meditations and actions to His well being and the furtherance of His purposes. As the mother of the Creator she becomes also in a real way the mother of Creation. As she loved and nourished Him so she loves and nourishes it. And through her patronage life and not death flourishes. Christians as servants of God and children of Mary can do no less than share her concern, turn concern into action and, additionally, commit our beloved planet and all upon it to the protection of her prayers.