Hannah the Mother of Samuel 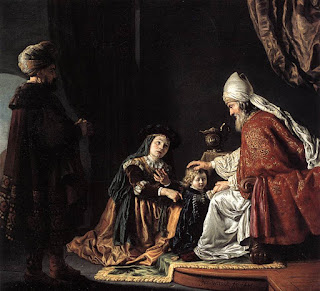 His mother used to make for him a little robe and take it to him each year, when she went up with her husband to offer the yearly sacrifice.
(1 Samuel 2:19)

Often in the Church when we think of holy women we consider them in the context of their relationships. Thus Hannah and St Monica are the mothers of Samuel and St Augustine respectively and St Scholastica is the sister of St Benedict and so on. This approach is not confined to the Church, there was much feminist criticism during the 2016 summer Olympics that commentators referred to the marital or parental status of female competitors but not that of male ones.

It is, I think, true that we are more prone to think of women in relational terms; that they inhabit a complex web of familial relationships which play a significant role in defining them. More or less implicit in this is the notion that these relationships should be a priority for women and that things like sport, business or academia should take second place. Men, by contrast, are considered as free-standing individuals who make the world by their unaided efforts and for whom this world-making is and should be their priority.

This is undoubtedly an unbalanced approach but, I believe, it would be perverse to attempt to counter it by censoring out reference to these relationships. We should, rather, change our attitude towards men. Samuel was the son of Hannah as St Augustine was of St Monica; St Benedict was St Scholastica's twin sibling. These men were no less defined by their relationships than the women were by theirs and, indeed, Samuel and Augustine owed more to Hannah and Monica than their mothers did to them. It takes a village (and a family) to raise a boy every bit as much as it does a girl. Men are not free-standing, individual world-makers they are sons, brothers, fathers, husbands and without these relationships to sustain and nurture them they would not only be low achievers they would be spiritually and emotionally deprived human beings.

It might be contended that it is precisely because men did not prioritise their relationships that they were able to go out and create modernity through exploration, innovation and risk taking. So much the worse for modernity. We are mistaken if we think that material gains and benefits outweigh spiritual and emotional losses and a slower pace of economic and scientific development is a price worth paying for a world in which both men and women are fully engaged in a complementary way with the lives of their families.

To put it another way, what we require is a civilisation of love. By its very nature love is a relational thing which, moreover, is characterised by sacrifice of self in the service of ones obligations towards the beloved. Which brings us to Hannah, the mother of Samuel. There is something poignant in the use of the word 'little' to describe the garment which Hannah took with her on her annual trip to see the infant son for whom she had so longed. Those of us who live in the post-industrial revolution era may miss the significance of the word 'made' but this robe was not a shop bought, factory produced thing. Hannah put it together herself and we can picture her bending over it for hours. Every little action associated with its making would have been charged with love. No doubt she would have shed tears over it, tears of devotion for her son, tears of pain at the long separation from him.

Yet this separation was not forced upon Hannah by a jealous and demanding God it was a freewill sacrifice which she made and sustained in gratitude and love towards the One from whom Samuel had come as gift. The child had been put into the service of the Lord's worship at the Ark of the Covenant in Shiloh as a grateful response by Hannah to the way that God had heeded her prayers. This was by no means a usual thing in Israel, Samuel was the only child so placed, nor is there any suggestion that the Almighty had demanded this as a quid pro quo for ending Hannah's childlessness. The supernatural virtue of Justice consists in giving each their due beginning with God and descending to the least and most vulnerable of His creatures (such as the unborn.) Hannah showed herself to be a just woman because she retained nothing for herself giving to the Lord that which was most precious to her and giving to her son all the love and prayers which she could. Each year she added to that to the extent of a little robe made by her own hands and touched by her tears.

As well as being poignant there is something beautiful in this scene which Scripture paints for us. The poet Keats tells us-
'Beauty is truth, truth beauty,—that is all
Ye know on earth, and all ye need to know.'
The nearer we approach to the perfection of a supernatural virtue like Justice, Truth or Love then the more beautiful we and our actions become. Compared to this annual pilgrimage of Hannah no amount of world-making, medal-winning, scientific breakthrough-ing by men or women has a tenth part of its loveliness. We should stop apologising for drawing to attention the fact that women are mothers and start apologising for all the times we have failed to recall that men are sons.
@stevhep