In the Shadow of Medina 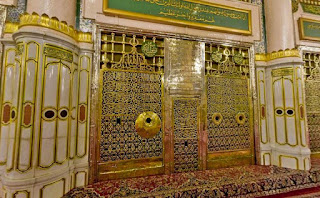 The English historian Tom Holland, through his book In the Shadow of the Sword, gives an overview  of several crucial centuries during which the Middle East was fundamentally and world-changingly altered. The epoch in question, late antiquity, saw the effective end of two ancient empires, Roman and Persian, as well as the emergence of a new one, the Arab. These events were of profound religious significance as well as being geopolitical earthquakes since each empire was associated with what are now, in 2016, distinctive religions Christianity, Zoroastrianism and Islam respectively. Mr Holland's approach aroused some controversy because he discounted as unreliable most of the accounts which we have of the rise of the new empire on the grounds that they were first written down some two centuries after the events which they describe. As these accounts represent not only a story of Arab conquest but also the foundational mythos of Islam itself this is rather delicate ground upon which to tread.

Relying on the scant resources which are more or less contemporaneous with the remarkable transformation of the region Tom Holland develops an explanatory hypothesis which is admittedly speculative or, in his own word, 'provisional'. It is well beyond my competence to comment on these matters I was, however, struck by some things which are present clearly in the Holland version and in a more veiled form in the 'official' narrative. Firstly, it seems clear that the career of the founder of Islam can be divided into a period where he proclaimed the new faith in the face of opposition before a flight (hijrah) to the city now called Medina where, in phase two, he and his emigrant companions (muhajirun) set about building a State and expanding its frontiers. Secondly, the essential groundwork to what are now orthodox Sunni Islamic doctrines and practices began to appear in written form in southern Iraq during the era of the Umayyad Caliphs some decades after the Arab victories.

So, why am I writing about all this in a Catholic blog you ask? I think that if we look at the way in which our respective orthodoxies began to be formed we can see crucial and irreducible differences between Catholicism and Islam, differences which still matter today and cannot be wished away by airy references along the lines of 'we all worship the One God'. Leaving aside conspiracy theorists like Dan Brown, the new atheists and liberal theologians it is generally accepted that the basic framework of Catholic orthodox belief, its core texts and fundamental doctrines, were in place before the Emperor Constantine revolutionised the relationship between Roman Church and Roman State. This means that Christians being excluded from power first addressed themselves to questions of meaning and thus engaged from the outset with the ideas of philosophy, something we can see in St Paul and St John within the canon of the New Testament itself. As an aside I would note that although we are frequently told that an advanced Islamic civilization exported philosophy to a backward Western Europe it is the case that philosophy helped to form Christian thought from the beginning whereas Muslim philosophers had to deal with an already existing and sometimes hostile body of Islamic orthodox thought when they began their work.

I digress however, another consequence of powerlessness was that the Church could appeal to the marginalised and excluded as being of their number itself. Combining these two elements early Christian thinkers focussed on the texts and examples from their own history which most addressed their own radical powerlessness and exclusion and developed their theological doctrines on that basis. There are few things more inspiring than the example shown to us by heroic figures whom we can imitate. For the formation of the Church's self-image the icons which they looked to were the life of Jesus, who was arrested and executed (without resistance), and the history of the Apostolic era where the primitive Christian community was persecuted (also without resistance) and scorned. For the Church as Church it's history of being the patient victim of misused power became the heroic age towards which it looked as the gold standard for guidance about how to behave in every age.

Several centuries later Iraqi Muslim scholars found themselves in a radically different situation when they came to mould their inchoate mass of ideas and texts into a single universally useable form. While they themselves might be out of power their rulers were all professedly Muslim. Consequently they had every reason to develop doctrines that could and should be adopted and implemented by the Caliphal State. Therefore the heroic age towards which they looked was post-hijrah Medina and the behaviour of their religion's founder together with his empire-building companions and successors among the muhajirun. This was logical enough, the founder had faced problems and difficulties which could be seen as analogous to those of their own situation. As he, the founder, was inspired by God but the Caliphate's current rulers obviously were not the presumed example of the founder could be used as a stick with which to beat the rulers into changing their behaviour.

Like Christianity it was the case that Islam too made its appeal to the marginal and excluded but it did so in the context of a very different situation. In its early centuries to become Catholic was to risk persecution, during the equivalent era of Islam becoming a Muslim was a way to escape persecution or, at any rate, punitive taxation. Looking towards different icons of heroism and having different relationships with the State inevitably led the two orthodoxies down wholly divergent paths where the notional shared belief in the One God became very much a second order question.

It would be a profound mistake to suppose that these different origins are no more than an interesting historical background. They are profoundly important for the essential natures of the two great faiths and for the societies influenced by them. Islam, as it began to be understood in Umayyad Iraq, had no Christ Crucified and no suffering pilgrim Church or their equivalents nor does 21st Century Islam. And that matters, it matters a very great deal. In the shadow of Medina Islam is a religion which understands the use of State power and Law not from the position of an outsider who needs to fear it but from that of an insider who may wield it. To that extent it is the polar opposite of Christianity regardless of its monotheism. Friendship between Christians and Muslims there may be and co-operation between religious leaders there should be but one can only underplay the differences in belief by sacrificing basic elements of one's existing identity.

There is a 'new thing' in the world though. Today there is a large and growing Muslim population living outside Muslim lands. The original viewpoint of Islamic orthodoxy had in mind a model where the Caliphate, the House of Islam, stood in relation to those outside its borders as potential conquerors and Muslim minorities would also be ruling minorities. That has not, fortunately, transpired so the Muslim diaspora has to work out a doctrinal and theological modus vivendi for flourishing in non-Muslim lands into the foreseeable future. One approach, the most highly publicised, is to renew the pattern of conquest and incorporate Western lands into a new Caliphate. The idea that this might succeed appears to us as vanishingly unlikely, no doubt, as the prospect of an Arab Empire appeared to seventh century Romans and Persians.

There is another possible approach though. The powerlessness of minority Muslim communities has some resemblance to that of the early Church. This makes the pre-hijrah experience of the founder of Islam and his companions much more of a suitable icon for them than the Medina model. The time of persecution and meekness in what tradition names as Mecca (though Tom Holland dissents) will be much more serviceable to diaspora Muslims than any muscular assertion of a power which they do not possess and are unlikely to possess any time soon. Certainly there are many, to put it mildly. 'difficult' passages in the Quran which they will require to reinterpret creatively or subsume to milder ones but Christians are in no position to get sniffy about difficult Scripture passages in anybody's religion. This will be a dangerous enterprise for Muslims to embark upon (and it goes without saying that in my opinion Christianity is a superior option to any redaction of Islam) because it will spark a violent, literally violent, response from Muslim conservatives.

I think, nonetheless, that if Muslim thinkers and writers outside the House of Islam can create a form of their religion which escapes the shadow of Medina and embraces the example of Mecca then they will be doing their faith and the rest of the world a great favour. They will also be demonstrating a great truth that the pen is indeed mightier than the sword.
@stevhep

The picture is The Rawdah Mubarak in Medina where the founder of Islam is reputed to be buried.