Mary & the Poets: 1 May Magnificat 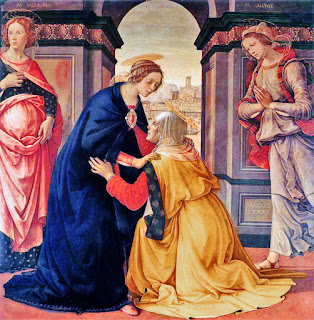 May is Mary’s month, and I
Muse at that and wonder why :
Her feasts follow reason,
Dated due to season—

Candlemas, Lady Day ;
But the Lady Month, May,
Why fasten that upon her,
With a feasting in her honour ?

In the northern hemisphere, where the practise of devoting a month to our Lady began, May is the high point of Spring. The poet and (faithfully Catholic) Jesuit priest Gerard Manley Hopkins mused about the connection between the season and the person honoured in it. It is a time when the short days and long nights of winter have been left behind.

Is it only its being brighter
Than the most are must delight her ?
Is it opportunist
And flowers finds soonest ?

Mary as our Lady of Light and as the Lightbearer, the one whose Immaculate Conception heralded the end of the great darkness which had covered the earth, is naturally associated with the coming of lightsome days filled with hope. There is another association though-

Ask of her, the mighty mother :
Her reply puts this other
Question : What is Spring?—
Growth in every thing—

...All things rising, all things sizing
Mary sees, sympathizing
With that world of good
Nature’s motherhood.

Spring is the season of new life appearing, growing, blossoming, gaining strength. This fertility and abundance which comes from mother earth is a material sign of the spiritual maternity of the Blessed Virgin, mother in the flesh of Jesus her Divine Son and mother in the Spirit of the Church and faithful Christians. Another parallel Hopkins draws out is this-

Which is, of course, a play on words in English. The growth of life in the world like the growth of the Christ in Mary's womb is a magnification of things. The word, however, calls to mind the song of praise to God that the Virgin sang when she visited St Elizabeth 'My soul magnifies the Lord
And my spirit rejoices in God my Saviour'

Well but there was more than this :
Spring’s universal bliss
Much, had much to say
To offering Mary May...

..This ecstasy all through mothering earth
Tells Mary her mirth till Christ’s birth
To remember and exultation
In God who was her salvation.

The final words invoke again the Magnificat and remind us that Mary's honours and privileges stem entirely and totally from God and her relationship to Him, daughter of the Father, spouse of the Spirit, mother of the Son. Additionally, though, there is a purpose behind his use of the words 'bliss' and 'ecstasy.' For theologians and poets these are words that point to the divine union of the soul with God, the Beatific Vision of the Uncreated Trinity which fills with delight those enraptured in eternity. In that most blessed year of her only pregnancy May was the month where Mary experienced that rapture in peaceful tranquility and absence of fear; a brief respite in a life that was to be so full of the shadows and the reality of the Cross.

The bliss and ecstasy of Mary's May is of value to us too. Mary is that ladder of Jacob by which we can ascend to the vision and the presence of Jesus her Son in heaven and descend bringing Him in love to our neighbours. In devoting ourself to her in her special month we are devoting ourselves also to the evangelical task of spreading the Good News about Jesus Christ.
@stevhep 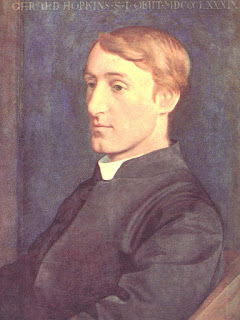 The pictures are The Visitation by Domenico Ghirlandaio and a portrait of Gerard Hopkins
Posted by Catholic Scot at Monday, May 01, 2017