What Does 'Deny Yourself' Mean? 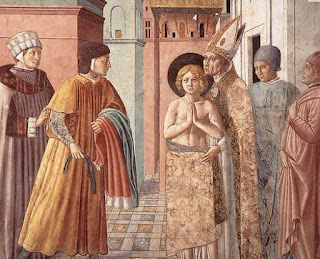 Jesus also said to all the people-
"If you wish to be a follower of mine deny yourself and take up your cross each day and follow me"
(Luke 9:23)

The third question might seem odd unless we consider the very next words of Jesus-
"For if you choose to save your life you will lose it, and if you lose your life for my sake you will save it."
(Luke 9:24)
So, the 'You' that carries the cross must be one who has, in a mystical sense, died and been reborn and thus might or might not be identical with the first 'You.'

It was, I think, Plato who used the analogy of the block of marble and the sculptor. An ordinary observer only sees a lump of stone. The sculptor, however, sees a perfect image surrounded by rubble. This parable may help us to answer our first two questions.

The initial 'You' is the person who still retains the stamp of their Creator's mark upon them (and all that He made was very good indeed.) The 'Self' is the rubble which that 'You' has collected during the course of its life. To mix my metaphors then, the 'You' becomes a kind of magnet whenever it acts contrary to the Divine image at its heart. As such it attracts all kinds of rubbish and detritus which affixes itself so closely that it becomes, as it were, a second skin totally covering the original shape of the 'You.'

Only the sculptor, the Holy Spirit, can now see the perfect image of the 'You' as it might become when liberated from the rubble of the 'Self.' By a gift of grace He can enable this trapped 'You' to partially glimpse its own true potential. Then together, Spirit and new awakened 'You,' can cooperate in the task of shedding this accumulated rubble of habits, attitudes, ideas and sensual desires which cling so closely to the fallen 'You.'

This process is akin to being flayed alive, so closely united has the second skin become to the first that it is not easy to know where one ends and the other begins. So, the experience of being sculpted by the power and mercy of God is an inevitably painful one. It may be helpful to know that the 'You' is not trying to gain something new and difficult to obtain. On the contrary it is trying to lose something which should never ever have been there. That is, the 'You' is simply realising what it would always have been had it not yielded to desires which proceeded in the first instance from the sensual part of the soul.

This brings us to the third question. The second 'You' is the you that a person would always have been had they not fallen. Thus it both is and is not the same as the first 'You.' Only by the grace of God, the Blood of Christ, the sacraments of the Church and a firm act of will on the part of a converted person can such a recovery be effected.

As I myself make this journey of rediscovery and realisation I offer the prayer "Lord Jesus Christ, incline my heart to follow Your will." (cf Psalm 119:36)
@stevhep

The painting is San Francesco by Benozzo Gozzoli
Posted by Catholic Scot at Sunday, July 02, 2017