Advent and the Problem of Suffering 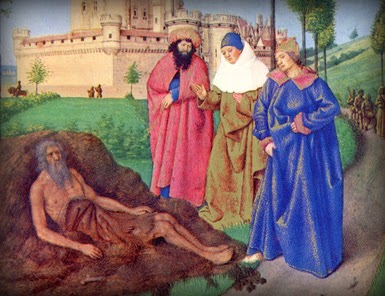 All that I was, is gone, the ambition, the happiness that was mine swept away like clouds before the storm; my heart is dead within me, a prey to long despairs
Book of Job 30:15-16

He will wipe away every tear from their eyes, and there will be no more death, or mourning, or cries of distress, no more sorrow; those old things have passed away.
Book of Revelation 21:4

Whatever the reality might be the popular image of the pre-Christmas season is that it is a time of happy bustling busy-ness finally crowned with a joyful day of celebration. It may then seems perverse to consider the problem of suffering in the context of this time of the year. Perhaps you will think it less so when I mention that I begin to write this on the 16th anniversary of my mother's sudden and unexpected death on 7 December 1998. Indeed it has been my experience both personal and professional (as a registered nurse) that for a good many people the month of December is associated with either the vivid presence of actual suffering or with memories of it still laden with the power to cause deep pain.

To the extent that Christmas is a secular festival charged with no higher moral purpose than to be a cause of universal jolliness and over-consumption then the mere mention of death, pain, affliction and torment can be seen as a crime against the season. The subliminal message is 'don't rain on our parade, keep your sorrows to yourself.' This can poison Advent and Christmastide for many who feel obliged to hide what they cannot comfortably share. As my father remarked some years after our joint bereavement 'The magic has gone from Christmas now.'

Fortunately the Feast of the Nativity of the Lord is not simply a secular festival and Advent is more than a shopping and partying season. The Church sets aside a time for us to prepare to welcome Jesus. And we can give over a part of this time to considering why it is that we need Him, which of His gifts to us should most fill us with gratitude. As part of the seemingly endless Culture Wars in the USA the slogan 'remember the reason for the season' has gained some traction. To the extent that this is simply a political blunt instrument for political conservatives to hit political liberals over the head with its use is regrettable. To the extent that it reminds people that trying to consider Christmas apart from Jesus doesn't really make much sense it is useful. Nonetheless on both counts it misses a valuable point. Sin, death and suffering are the reasons for the season. Jesus came into the world to combat and defeat these enemies of ours, He is a warrior and a healer because we are wounded and under attack from without and within.

During Advent we can identify our wounds and prepare to present them to our Lord that they may be healed or, since their is no permanent healing in this life, at least bound up. It is always useful when asking for gift to ask ourselves why we want or need it. It is no sin to want a new toy or a little taste of luxury or something beautiful but impractical. The innocent  little pleasures of life in moderation are part of the gift of life itself and God Himself gives of them freely filling the world with unnecessary beauty. But it is in an enduring relationship with the giver of the gifts that we are most enriched whether that giver be a parent, a child, a sibling, a friend, a valued colleague or the Creator of all that is.

There is much truth in the cliché that the mission of the Church is to comfort the afflicted and afflict the comfortable. The temptation which she faces is to overemphasise the first at the expense of the second. A corporate body perceived to be primarily engaged in the business of benevolently consoling the suffering and vulnerable is not apt to become so estranged from the world that it becomes the object of persecution and produce its crop of martyrs. A comforting Church can become a comfortable Church and thus herself in need of being afflicted by prophetic voices which call her back to the task of denouncing the individual, collective and structural sinfulness of the world. The key note for her must be one of balance. She, and we, should recall that very often the comfortable and the suffering are not different groups of people but that both states can exist within the same person. The wife and mother who rejoices in her family may still carry within her the scars of childhood abuse. The father who lights up a room with his ready smile may never forget the brutal torture that forced him to flee his native land.

The theme of balance too applies to those of us who suffer. To endlessly chew over and rehearse in our imagination the same little list of sorrows affords us no benefit, to try to repress and suppress memories of pain does us real harm. Advent and the Christian life in general affords us the opportunity to recall our afflictions in the context of the coming of the one who is our healer. They no longer remain our private property but a become a fully shared experience since the Jesus who was born in poverty and died, abandoned, on a Cross enters into all our anguishes and casts the light of hope upon them. Our hunger will not be assuaged by a six-course Christmas dinner but it will be by the coming into our life of God's Son, Mary's Son, Jesus our Saviour.

We are beset by dangers on every side and for Christians who do constantly recall both their sufferings and their Lord there is a special one. It is a feeling that if they still experience pain, if they are still afflicted then it means that somehow they are not good enough Christians, that if only their faith was deeper the pain would go away. Well, Jesus was a good enough Christian and His pain only ended with death. The Book of Job with which I began this post tells of a man who was so righteous that even God Himself praised Him. Yet Job suffered for reasons neither he nor we can fully understand. Stuff happens. The healing which Jesus brings is real healing but it is not always one that we can fully understand or appreciate in this life and may well leave a residue of physical or emotional affliction that never departs from us. That is not a failure of faith, or a failure of God for that matter, it is a truth which we cannot yet understand but which one day we hope that we shall.

Another thing worth recalling about Job is And cruelly he smote Job; smote him with the foul scab from head to foot,  so that he was fain to sit him down on the dung-hill, and scratch himself with a shard where he itched. (Job 2:7-8)  Job endured what he had to endure but also employed a shard to help deal with the sufferings he was experiencing. So too we should make use of whatever tools are at hand to help us in our need: medicines, therapies, doctors, nurses, counselling, whatever. It is wise to find a way through Christ, with Christ and in Christ to endure what must be endured. It is foolish to endure what we can honourably avoid unless we choose to do so as a voluntary sacrifice.

Don't forget to read my Christmas fable Adoration of the Pangolins for free on Wattpad.