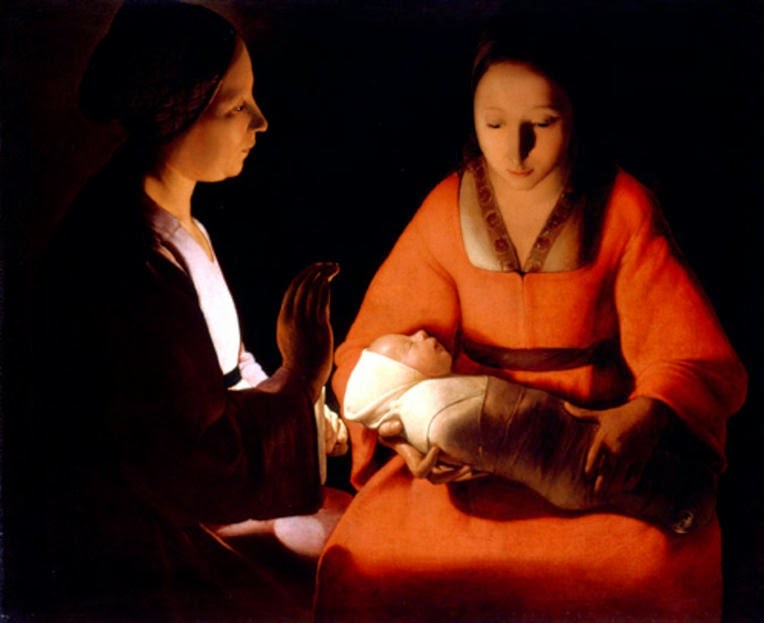 And the Word became flesh and dwelt among us
(John 1:14)

And to the angel of the church in Smyrna write: ‘The words of the first and the last, who died and came to life.'
(Revelation 2:8)


The extreme adaptability of humans can be a mixed blessing. Their ability to exist and even flourish in extremes of nature caused by climate or terrain is a valuable survival tool. Their ability to do the same in the face of abnormal conditions caused by human folly or sin as in a tyranny, a religious cult or even a workplace run by incompetent managers is both a survival mechanism and a brake on effecting change. When something extraordinary becomes the 'new normal' it can take an extra effort to see just how unjust, unfair, dysfunctional or plain wrong it is and an even bigger effort to persuade people to do something about it.

Sometimes this adaptability has a more subtle effect still. When the Christian doctrine of the Incarnation began to be proclaimed it immediately provoked strong reactions. Jews thought it a horrible blasphemy, Greeks a foolish absurdity. From the moment of their first encounter with it they realised its revolutionary implications for the world of thought and religion and reacted accordingly. So radical were these implications that even many who were attracted by the figure of Jesus rejected them and most of the heresies which the primitive Church had to battle, from Gnosticism to Arianism, aimed quite precisely at removing the doctrine of Incarnation from the Christian credo.

However with the spread of Christianity and the passage of time Incarnation became the new normal. It's implications did not stop being revolutionary but these implications for the most part did stop being considered. Humans adapted to the extraordinary by banalising it, ignoring it or denying it under a form of words which implied accepting it. It belongs, however, to the peculiar genius of the Catholic Church that it is this doctrine above all others which she has held patiently, doggedly and unapologetically before the eyes of the faithful and the world these past two millennia or so. It is this which lies behind the myriad images of the baby Jesus and the crucified Christ, behind the cult of Mary and the saints, behind the relics, the shrines, the pilgrimages and most of all behind the holy sacrifice of the Mass as the 'source and summit of Christian life.' To the extent that we simply consider these things severally and together as just being the Catholic 'brand' the stuff that Catholics do then we miss the point that it is not just what Catholicism does but also what Catholicism is. To see why this is so we need to step back several paces so that we can encounter the doctrine of Incarnation as if for the first time.

From ancient times it has been an accepted psychological fact that people are often wracked by severe internal conflicts. St Paul expresses it in this fashion 'What I do, I do not understand. For I do not do what I want, but I do what I hate' (Romans 7:15.) Conventionally this has been understood as the lower self battling against the higher self. It would still be so regarded indeed were it not that judgmentalism has become the only unforgivable sin in the modern West. The classic understanding saw the flesh at war with the spirit, the appetites with the intellect, the irrational with the reasonable. The model has much to commend it, so much so that secular social science renamed it 'deferred gratification' and adopted it to its own use. Hovering behind this paradigm is the 'why' question, why are we conflicted?, and the 'how' question, how can we resolve or escape from this conflict?

One answer, which comprehensively embraces Greek philosophy, Indian religion, Gnostic heresy and arguably some understandings of Protestantism is to see the spirit of a person being a different entity from the body of a person. The particular body which a person inhabits is an accident of history but the spirit and that alone is the essence of person. The spirit not the body has a relationship with God (or is identical to Him) and endures to eternity. This means that the object of the spiritual life is to leave the body behind. What the flesh does is either inimical to salvation or satori or God realisation or whatever or else it is irrelevant depending on your cult of choice. Gnosticism (inspired by Zoroastrianism) took this line of thought to its logical conclusion by suggesting that God only created spirit and that the material cosmos had been created by an evil demiurge. Everything material was wicked and spirits had fallen from the spiritual realm to become captives in the material one. Matter was despised and liberation from it was the only project worth pursuing. The Cathars expressed this idea by holding nothing to be more abhorrent than a pregnant woman representing as she did a newly captive spirit and procured abortions as the means by which the spirit could be set free to return to God

Not all such approaches go to the extremes of the Cathars but they do necessarily lead to either a passivity in relation to the body or an active hostility to it. The obverse of this view might be termed Dionysian which suggests that the appetites of the body exist to be served and that the apparatus of intellect and reason fulfils its purpose chiefly by delivering satisfactory sensual inputs to the body. This might be called a practical philosophy and whilst it has few advocates it certainly has innumerable adherents. 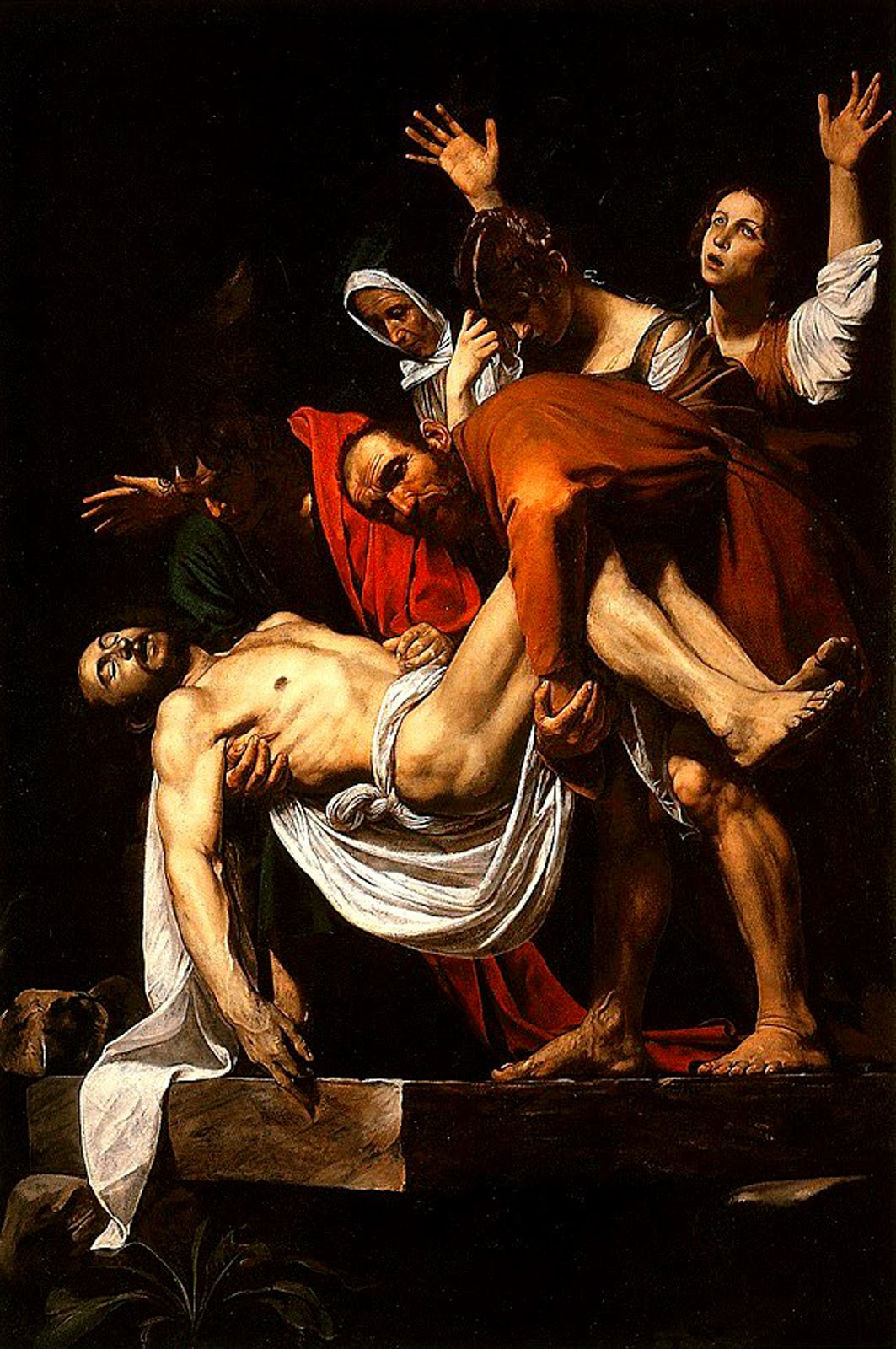 Deposition of Christ by Caravaggio

Into all this comes the child Jesus, fully human and fully divine. Unlike a prophet or an enlightened teacher He is not simply a person filled with an abundance of spirit or who has more fully realised His essential nature concealed by the material barrier of Maya. Nor is He an Avatar of divinity who is human only in appearance or only temporarily. His humanity and His divinity are united eternally. The Logos of God is never not one thing with Jesus. Jesus is never separate from the Logos.  Because of the Incarnation the material universe in general and the human body in particular can be considered as part of the solution rather than as part of the problem. Bodies are not barriers to union with God or to salvation but an essential part of the equipment necessary to achieve these aims.

Certainly the flesh can fall under the dominion of sin (so can spirit and intellect of course) but it is not sinful by nature. Taking the classification of higher and lower functions the flesh is inherently vulnerable to temptation because of its greater distance from the seat of reason and spirituality but in the battle to control it inevitable victory belongs neither to good or evil. The body is always in a position to be retrieved from the dark side and more than that to become a positive force for good in the struggle for the triumph of light. Incarnation means that the whole person and every person can be saved and enter into a perfect relationship with the Divine Source of life. The Church, of course, counsels asceticism for her children and the world, the flesh and the devil are often highlighted as the enemies of salvation. This represents the important principle of balance between, in Aristotelian terms, excess and defect. The untamed flesh is an enemy, the tamed flesh is an ally. For the Gnostic or the Buddhist or even perhaps the extreme Lutheran the notion of 'tamed flesh' is inadmissible.

For God to enter so fully into the human condition, to become embodied, He begins His journey from within a body. That is, the project of Incarnation to be complete requires Jesus to be not only Son of God but also Son of Mary. His conception is miraculous but His gestation and birth follow the normal human pattern. He is as we are but without sin. There is no part of the human journey from conception to death which has not been divinised by His touch and which we also can therefore divinise by putting on Christ through faith. What the Cathars found abhorrent the Catholic finds to be suffused with the prospect of glory. And so we see, as I noted at the start, the cult of Mary is a celebration of the Incarnation of God through her. The cult of the saints is a celebration of the Incarnation made present in their lives through the actions of their bodies The relics, the shrines, the pilgrimages all point to the fact that material objects and places can, properly used, be not barriers to spiritual progress but, because of the Incarnation spiritual superhighways. And the supreme expression of this is the Eucharist where Divinity is not only made present under the appearance of bread and wine but is consumed and incorporated by the faithful. It is, perhaps, this sacrifice of the Mass which causes the greatest scandal to the greatest number of critics of the Catholic faith; atheists, Muslims, Jews, Protestants (or at least their most logically consistent spokespersons) all for different reasons find the notion appalling, revolting, disgusting, ludicrous and any number of other epithets you could think of. Good. I'm glad that this is so. It shows that the Church is faithful in its adherence to the central saving truth of its faith. When those who reject the doctrines of the Church approve of it worship and liturgies then it will be a sign that the Church has lost its way.

Non-religious readers who have made it this far may say that Incarnation is nothing more nor less than an elegant solution to a non-existent problem. Modern psychology has described and explained these internal conflicts and proposed solutions to them which do not require the notion of spirit or spirituality. It is not only beyond my powers to address this comprehensively but it would unduly try the patience of those poor souls who have already spent so much time with this blog which they started under the impression that it was a jolly Christmas story. I will just say that psychology is a useful science and has given us many tools which are helpful in healing troubled souls. What it hasn't done is disproved God and, moreover, to the extent that material techniques are useful in addressing spiritual needs it can be argued that it confirms more than it refutes the notion that divinity can find a home in the bodies of men and women because Jesus has made all things possible