The Coronation of Mary-A Vision 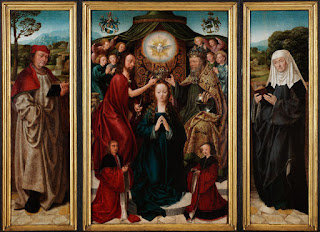 The King’s daughter is all glorious within:
her clothing is of broidered gold.
She shall be brought unto the King
(Psalm 45:13-14)

As I lay my Rosary aside on Assumption eve suddenly heaven was opened before me and I saw our Blessed Lady St Mary sitting in a room in the Father's house. It happened that the most Blessed Lord granted me the gift, through the Spirit, to understand what I saw and how glorious it was.

It seemed to me that with the eyes of her inward vision our Lady was rapt in blissful contemplation of the uncreated One who is Three. With her outward eyes the Virgin Mother looked with delight on the things of her heavenly home. Suddenly a voice behind her spoke-
"Hail, full of grace"
St Mary rose and turning round she smilingly said
"Behold again the handmaid of the Lord."
Facing her now was St Gabriel the Archangel and he shone with the glory of love and radiated the power of compassion.
"He awaits you within and I am to guide you to Him."
"Be it done to me according to your word."

And I saw them depart the room and enter an antechamber of the Palace of God. There were many glorious things in it and it seemed to me that the most glorious sight to be seen were two people of venerable and saintly appearance.
"Hail, the Immaculate Conception." they said together.
As St Mary cast in her mind what manner of salutation this should be St Gabriel spoke again-

"You are the Morning Star, the light that heralds the dawn. At your conception the darkness that covered the world was pierced by the first bright gleam since the Fall of your ancestor Adam. Free at your first moment, by the gracious and fitting gift of God, from any taint of Original Sin you are our Lady of Light and a sign of hope to all of fallen humankind."
And Mary went forward embracing with joy the two that had saluted her whom I would call St Joachim and St Anne but whom she called "Father" and "Mother." 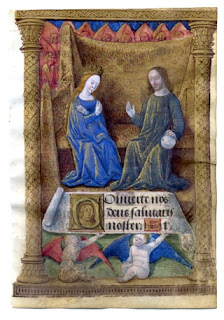 Then they all processed into an ante-chamber more splendid than the last. In it stood a woman whose face was still marked with the signs of long sorrow patiently borne and with her a man clothed in camel's hair.
"Hail Mediatrix of all Graces," they said together.
As St Mary cast in her mind what manner of salutation this should be St Gabriel spoke again-

"You are the Mother of divine grace, the spiritual vessel, the singular vessel of devotion. Through your presence, the sound of your voice and the Divine One whom you carried in your womb a saint was filled with the Holy Spirit and enabled to see the things of God and to speak clearly about them offering Him praise and thanks. Through you too an unborn child, and the Lord loves all such, leapt with joy and was filled with the Spirit of God. Grace, which fills you, overflows through your hands to those to whom you will to give it from now until the end of time."
And Mary went forward embracing with happiness the two who had saluted her whom I would call St Elizabeth and St John the Baptist but whom she called "cousins." 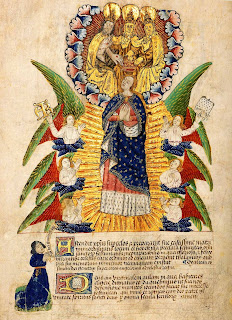 The procession now entered the most splendid ante-chamber that I had yet seen. In it was a man, upright, honourable and just and he leant upon a flowering staff.
"Hail, Cause of our Joy." he said.
As St Mary cast in her mind what manner of salutation this should be St Gabriel spoke again-

"You are the Mother of God, the Mother of Christ, the Mother of the Saviour. Through your consent the Word of God was made flesh in your womb. Through your motherhood Jesus entered the world. You are she who brought the devices of satan to nothing. Without you there would be no hope, no life, no light in the hearts of women and men. Truly upon your fiat is founded all the joy and happiness of humankind."
And Mary went forward embracing with gladness the one who had saluted her whom I would call St Joseph most chaste and whom she called "husband." 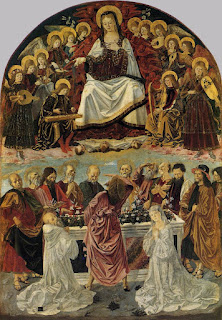 The joyful procession entered into the fourth ante-chamber and as they grew nearer to the throne of the King so the light through which they walked grew in beauty and loveliness. A venerable man, dignified and kindly stood beside a woman of great devotion and service.
"Hail Seat of Wisdom," they said together.
As St Mary cast in her mind what manner of salutation this should be St Gabriel spoke again-

"You are the Mother Most Amiable, the Mother of Good Counsel, the Virgin Most Prudent, the Virgin Most Faithful. To your care and guidance was entrusted the Son of the Creator. To you He was obedient, in you He trusted. You ever willed to do what the Grace of God within you willed to do. In your humility you were obedient to the Father in all things and at all times. These are the things of wisdom and truly you are wise."
And Mary went forward embracing with delight the two who had saluted her whom I would call St Simeon and St Anna but whom she called "friends." 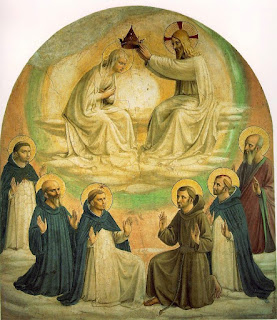 After this the procession entered into the fifth ante-chamber which was suffused with the light and presence of God whose royal seat was now so near at hand. In that chamber I could see a man cheerful, benign and authoritative.
"Hail, most gracious Advocate," he said.
As St Mary cast in her mind what manner of salutation this should be St Gabriel spoke again-

"You are the Virgin most powerful, the Virgin most merciful, the refuge of sinners,comforter of the afflicted, help of Christians. With the eyes of loving mercy and kindness you saw an unmet need and through your prayers moved your Divine Son to turn water into wine, You gave the wise counsel to 'do whatsoever He saith to you'. For all of time you will give this counsel to the world and too you will seek and find the disconsolate and bring their needs before the Lord. Never shall you do so in vain for He loves you and will give heed to all your petitions."
And Mary went forward embracing with amiableness the one whom I would call the steward of the feast at Cana in Galilee but whom she called "neighbour." 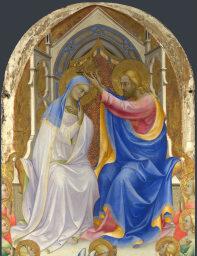 Then they entered the final ante-chamber filled with that happiness of heaven which is ever perfect and ever growing. There stood a woman who resembled the Virgin and who bore upon her face the signs of great suffering and greater joy.
"Hail Queen of Martyrs," she said.
As St Mary cast in her mind what manner of salutation this should be St Gabriel spoke again-

"You are the Tower of David, the Tower of Ivory. You are the foremost among those who have endured agony for the sake of the Kingdom of your Divine Son Jesus. You are she through whose soul a sword has pierced. Upon the hill of Calvary, beneath the Cross of Christ you endured in height, in length, in depth all the agonies of your Son. His pain, His abandonment, His death which in a manner you shared. You endured too the agonies of a mother who sees her only one, her beloved, her dear one, dying before her eyes. Because of this you are close to all who suffer and especially to those who suffer for the faith. In all ages of the world the persecuted people of Christ will turn their eyes to you, raise their prayers, sighs and lamentations to you and you will send them consolation and present their cause to the Lord, your God and their God."
And Mary went forward embracing with love the one whom I would call Mary, the mother of Salome, but whom she called "sister." 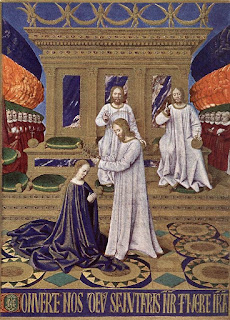 And then they all with exceeding great gladness entered into the inner sanctum of the Palace of God, the throne room of the King. And, behold! the King Himself stood waiting for them. His clothes were as white as the light and His skin shone like the sun. This shining did not conceal but rather revealed the more those wounds upon His hands and feet which cruel men had inflicted and His brow still bore the marks of barbed thorns. St Mary humbly sank to her knees before Him and said-
"My soul doth magnify the Lord, and my spirit hath rejoiced in God my Saviour."

The King stretched forth His maimed hands and tenderly raised her to her feet.
"My, Son" the Blessed Virgin said.
"My Mother," Jesus replied. He gently led her to a great throne that stood to the right of His own and placed her upon it. Then St Michael the Archangel clad in armour and shining with the glory of justice and radiating the power of virtue, came forward bearing a crown. Our Blessed Lord took it from Him and loving placed it on the brow of Mary, Queen of Heaven. At that the cherubim and seraphim, all the choirs, rank upon rank, of the angels and all the saints and martyrs of the Kingdom of God burst into songs of gladness, rejoicing and praise.

It was given to me to know that the crown had been made of the most precious elements in all the created universe. And looking closely at it I could see that this was indeed so. The crown of our Lady and Queen consisted of nothing more or less than these four word "My Son, My Mother" 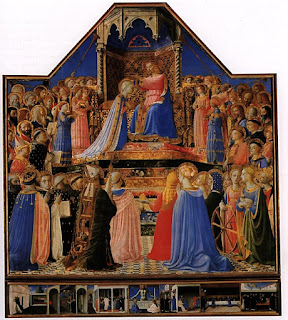 Then the vision faded and vanished. Looking around I saw that it was now Assumption morning and I took up my Rosary once more offering up my prayers with deep gratitude to the Good God who has given us such a Good Mother.

And there appeared a great wonder in heaven:
A woman clothed with the Sun,
and the Moon was under her feet,
and upon her head a crown of twelve Stars
(Revelation 12:1) 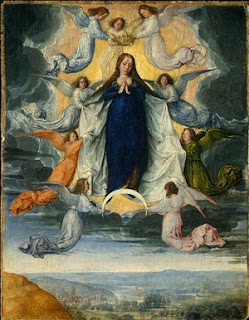