The Logos in sight. 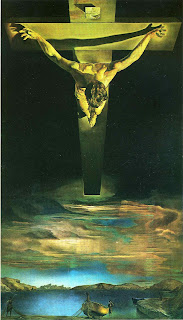 40 For this is the will of my Father, that everyone who looks on the Son and believes in him should have eternal life, and I will raise him up on the last day.

For St John the Theologian seeing or looking upon Jesus is an important part of the Good News. It can be seen as a running theme through much of his Gospel account. Almost the first words he reports our Lord saying are "come and see", words which St Philip echoes on his first evangelical mission to St Nathaniel. Our Lords final reported words. to St Thomas, in what was probably the originally planned final chapter (20) are “Have you believed because you have seen me? Blessed are those who have not seen and yet have believed.” John 20 John does not use words without a purpose nor does he write without a schema in mind. At one level he appears to be saying that with the Ascension one mode of access to the Saviour, with the eyes, is closed and henceforth the believer is less richly gifted than the Apostolic generation of His followers. Indeed the opening of his first letter points clearly to this theme   1:1 That which was from the beginning, which we have heard, which we have seen with our eyes, which we looked upon and have touched with our hands, concerning the word of life— 2 the life was made manifest, and we have seen it, and testify to it and proclaim to you the eternal life, which was with the Father and was made manifest to us— 3 that which we have seen and heard we proclaim also to you, so that you too may have fellowship with us; and indeed our fellowship is with the Father and with his Son Jesus Christ. 4 And we are writing these things so that our joy may be complete. 1 John 1


St John can believe firmly, fully and truly because he has seen. Is he calling upon us to believe in the same way simply because we trust implicitly in his witness and the testimony of the other Apostles? Perhaps he is, but he is also more subtle than that. Different kinds of people will believe the same thing for different kinds of reasons. The words of the Evangelists carry conviction for those who find good cause to believe them reliable reporters. Others will approach from the opposite angle and seek to establish the reports accuracy before crediting the reporters (and who nowadays trusts a reporter?). For these St John provides pointers to the sort of direct experience of Jesus which will have the power to convince. In the chapter containing my opening quote there is guidance to experiencing the Incarnated Christ in the Eucharist, but this is about taste, touch and sensation as a form of the Divine encounter it does not address the experience of looking on the Son.

Does the Theologian provide such pointers to the experience of seeing Jesus as well? I think he does in two ways, via the fullness of the Incarnation and via the absence, as it were, of the Incarnation. Firstly, St John gives a vivid account of the Passion. Pilate displaying the scourged Saviour says "Behold the man" and again "Behold your King" (John 19) and then he delivers Him over to be crucified. And as He is taken down from the Cross the Theologian concludes his account with the words “They will look on him whom they have pierced.” There are different ways of reading the Gospels. One, perhaps the most widespread, is to study them for meaning. Another is to inhabit them, to enter into their life with our own lives. For the first generation of Christians, mostly illiterate perhaps, the Gospels were heard spoken by those deeply moved and convinced by them. Sometimes, indeed, spoken by eyewitnesses to the events described or fellows of the Apostles. For those hearers those accounts were inhabited. They almost literally saw them. As they took them away in their minds and hearts and meditated upon them in the days and hours after they could experience a good deal of what it meant to look on the Son, broken, bruised and bleeding, and so believe in Him, entering thus upon eternal life.

For me, however, the clearest description of the Son and the most direct way I have found to look on Him is to be found in these words that the Theologian addresses to us-

What form could the Son have before there was form at all? Before there were forms there were Persons. One Person, who later could be described "he had no form or majesty that we should look at him, and no beauty that we should desire him." Isaiah 53, was first the Logos. Heraclitus, the ancient Greek philosopher spoke, long before Christianity, of the Logos in this way All things come out of the One and the One out of all things. ... I see nothing but Becoming. Be not deceived! It is the fault of your limited outlook and not the fault of the essence of things if you believe that you see firm land anywhere in the ocean of Becoming and Passing. You need names for things, just as if they had a rigid permanence, but the very river in which you bathe a second time is no longer the same one which you entered before. The Son is the rational principle underlying God's creation because He was first of all a Divine Person of the Blessed Trinity. To look on the Son and believe in Him means to look upon the self giving principle that empties Himself that we may be full. Who empties Himself for love, in love and through love. Who uses love to render hate void and weakness to overcome strength. Whom darkness can neither overcome nor comprehend. To look upon all this with thankfulness is to do all that is required to see the Son and enter in upon His promises.

My online presence is at-