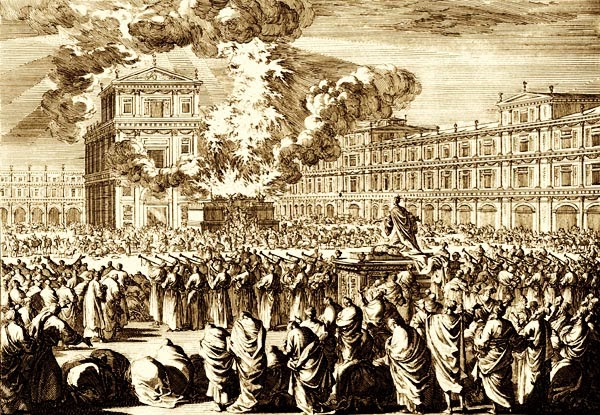 22 These words the Lord spake unto all your assembly in the mount out of the midst of the fire, of the cloud, and of the thick darkness, with a great voice: and he added no more.
Deuteronomy 5

Idols are visible. They attract our senses and stimulate them. An invisible idol would make little sense. Surrounded by nations of idolaters the children of Israel worshipped an invisible God whose inmost sanctuary was behind a veil and whose presence was manifested by thick darkness. It can be discouraging to see obscurity when you look for clarity, to find that all your senses have become functionless. It is no surprise that the history of Israel consists mostly in a falling away from the One who is hidden from us and a falling towards those idols who caress the senses. The surprising thing, perhaps, is the faithfulness of the Father who never stops trying to win back the love of His children by one means or another.

Modern folk who have little desire to overtly worship anything find the attraction to idolatry as incomprehensible as the attraction toward the God of Israel and wander what all the fuss is about. They are happy to tolerate either, meaning they are contemptuous about both. It must be a vain God or gods who constantly demand praise and sacrifice and a credulous person who responds willingly they reason. The crucial point, easily missed here, though revolves precisely around the appeal to the senses. There was not a competition between various cultic deities each offering the same basic goods like McDonald's or Burger King. This was people choosing to follow a way that promised to give sensuous fulfilment now or to obey a law which demanded a high ethical standard and which could only be complied with through a programme of self discipline. And all this for a God who was hidden from sight in thick darkness. At this stage of revelation there was not even the promise of heaven and the resurrection to act as an incentive.

The nature of the different ways is given dramatic point in the Book of Daniel. The King of Babylon, a city emblematic of licentiousness, arrogance and luxurious living sets up an image of gold, emblematic of wealth, and commands all to worship it. Three young Jewish men refuse, preferring instead to offer their praise to the invisible God of Israel who is even more invisible than usual since His Temple has been destroyed and His people taken captive. They say simply
17 If it be so, our God whom we serve is able to deliver us from the burning fiery furnace, and he will deliver us out of thine hand, O king. 18 But if not, be it known unto thee, O king, that we will not serve thy gods, nor worship the golden image which thou hast set up.
Daniel 3

The final clause being the crucial one. They believe their God to be all powerful and the one true God and therefore they cannot fathom His purposes, He is obscure to them, nonetheless they will put their lives at risk rather than deny Him because He is God and the golden image is just a golden image.

So, the division between idolaters and worshippers of the God who is hidden exists as much in the West today as it did in the Middle East 3000 and more years ago. The modern idols of the materialist, consumerist, celebrity obsessed world are no less potent and no less worshipped because they do not get called gods. And ultimately, since each of these idols feeds our sensual appetites, what we worship is ourselves since it is the fulfilment our greedy desire for pleasure which will, we hope, be the outcome of our fervent acts of worship. Unless that is we turn the eyes of our hearts to the One who dwells in thick darkness, who spoke and then said no more.

And why should we strain our eyes for what we cannot see or listen for what will not speak? Because we desire heaven? Because we fear hell? Well, perhaps, but neither of these are the deepest reason. It is not said that God created the cloud which obscures Him. Maybe, indeed, there is no cloud, the darkness is of our own fashioning. Jesus, Son of God and Son of Mary, said
22 The light of the body is the eye: if therefore thine eye be single, thy whole body shall be full of light. 23 But if thine eye be evil, thy whole body shall be full of darkness. If therefore the light that is in thee be darkness, how great is that darkness
Matthew 6

If God disappears into darkness it is not because He is dark but because we are. The reason we have for seeking Him and no other is that only thus can we transform our darkness into His light or, rather, can we allow ourselves to be liberated from a dark kingdom and transported into the realm of light in which, and in which only, we can live and move and have our being in happiness and joy all the days of our lives.
18 But we all, with open face beholding as in a glass the glory of the Lord, are changed into the same image from glory to glory, even as by the Spirit of the Lord.
2 Corinthians 3