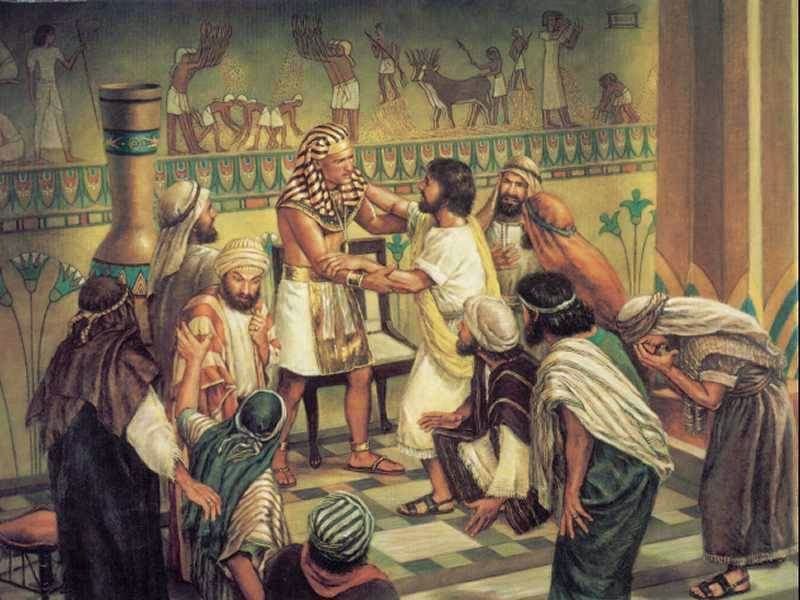 You thought evil against me: but God turned it into good, that he might exalt me, as at present you see, and might save many people. Fear not: I will feed you and your children. And he comforted them, and spoke gently and mildly.
Genesis 50:20-21

You might be forgiven for thinking that these are the words of the post-resurrection Jesus. In fact it is the Joseph who is mostly famous now for his amazing technicolour dreamcoat who is speaking. His words come at the end of a remarkably moving episode (Genesis 50:12-21) in the final chapter of Genesis. If this blog does nothing more than persuade you to read the passage then it will be a good job well done.

The context is that following the death of their father the brothers of Joseph feared that he would now exact revenge for them having sold him into slavery many years before. He, of course, did nothing of the kind. I think that this is significant to us for two main reasons. It shows a continuity between Old Testament (OT) and New Testament (NT) values and in Joseph we see a type or figure of Jesus so that the more we reflect upon him the more we will know about our Saviour.

There is a school of thought which suggests that there is such a marked contrast between the God of the OT and the one of the NT that really they are two different Gods or conceptions of God. Historically this has given rise to various heresies beginning, I think, with the Marcionites. Today the idea manifests itself chiefly in the suggestion that Christians are or should be embarrassed about the OT. A related idea suggests that Jesus is so radically different from historical Judaism that He must have learned His ideas of religion from India, specifically from Buddhism. The actions of Joseph, which are eminently compatible with Christianity, point up the fallacy of these approaches.

As the Chief Minister to the enormously powerful Pharaoh Joseph would have had a free hand to do whatever he wanted to his brothers who were, after all, perceived as uncouth barbarians by the cultured Egyptians. The brothers had betrayed him and his subsequent life had been for many years both hard and bitter. Had he extracted and eye for an eye and a tooth for a tooth no one would have blamed him. And yet he did not. Not only did he offer forgiveness but went beyond that to offer material well being and gentle love to his betrayers and their families. He did this explicitly in the name of his God and the authors of Genesis who virtually end the book with this episode clearly present it as a logical expression of faith in the God of Abraham.

A casual reading of the OT shows a deity who could be described at best as grumpy though perhaps the fine old Scottish word carnaptious might be more apt. The people of the OT, however, did not read it casually. Actually in most instances they did not read it at all, they heard it. And the text which was delivered verbally came with a context, everything would be accompanied by a commentary if by commentary we understand not merely words to describe meaning but a way of life and set of values through which and by which to understand meaning. There would be tensions and disputes over meaning within the community of course, which human community is free from those?, but the thread of understanding which see's God in terms of mercy, forgiveness, long-suffering and gentleness is never entirely absent from the narrative. If He is seen at times as Angry God it is an anger which has more of sorrow than of ire within it. Joseph is an example not only of how humans, specifically in this context Jews, should behave it is also an illustration of how God Himself behaves, forsaking justice for the sake of mercy.

If it is sometimes difficult for us, with our different contexts, to see this merciful OT God in quite the same light we seldom have much difficulty in seeing Jesus in that way. Hence the usefulness in considering Joseph as a prefiguring of Jesus. They were both associated with a group of 12, Joseph and his brothers, Jesus and His Apostles. They were both betrayed and sold to the enemy. They both endured a Passion, Joseph being imprisoned. The psalmist describes this episode in a remarkable way too : the iron pierced his soul, Until his word came. The word of the Lord inflamed him. (Psalm 104/5:18-19)  And they both forgave those who had abandoned them.

More than forgave in fact. Joseph acknowledges that his current exalted position is a direct consequence of his betrayal. Jesus was raised up on the Cross in order to draw all humans to Himself because Judas had betrayed Him. Joseph will feed his brothers and their children out of the wealth his exalted position entitles him to. Jesus feeds the Apostles and their children (ie those whom they convert) with His Body and Blood which have become the sacraments of salvation through His elevation on the Cross. Joseph will comfort them from his elevated place, Jesus sends the Comforter, the Holy Spirit, after He is raised to heaven in the Ascension. Joseph speaks gently and mildly. Jesus says Come to me, all you that labour, and are burdened, and I will refresh you. Take up my yoke upon you, and learn of me, because I am meek, and humble of heart: and you shall find rest to your souls. For my yoke is sweet and my burden light. (Matthew 11:28-30)

It is also perhaps worth mentioning that until old Jacob, also called Israel, died the brothers has no fear for their safety. The respect that Joseph had for his father would have in any case restrained his hand from exacting justice whenever Israel pleaded for mercy. Mary, a daughter of Israel and the mother of Jesus, stands in the same position in relation to her Son. It may well be that without her advocacy on our behalf we will encounter mercy instead of the just punishment our conduct deserves. But whether or no that is so if we take her for our advocate all doubt is removed, we will certainly encounter mercy from Jesus if Mary pleads our cause.