Love Me Too Little 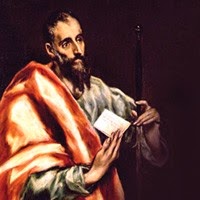 " For my own part, I will gladly spend and be spent on your souls’ behalf, though you should love me too little for loving you too well. "
2 Corinthians 12:15

As I understand it the Catholic argument from Natural Law goes something like this. Each person has, as a given, a conscience, which is where the basic guide to right conduct and right living dwells within their mind and heart. Additionally each person is endowed with reason which enables them to approve the urgings of their consciences as being compatible with rational analysis of situations. Therefore when a person acts in accord with both conscience and reason then they will be living lives which are good, virtuous and productive of moderate levels of happiness. All of this can exist apart from divine revelation, which means that it is theoretically possible to live lives more or less pleasing to God without ever having heard about Jesus or His gospel. The Catholic Church does not hold to the notion that it is a necessary condition of the moral life to be a Christian.

As you might expect this argument is neither atheistic, the intervention of God is required at all points, nor without caveats. The conscience is only a given because God gives it, humans only possess reason because God has endowed them with it. To be willing to listen to one's conscience and then to have the strength to act upon it both require an active gift of the grace of God. Moreover, the wounding effects of Original Sin mean that we are easily tempted to ignore our conscience and pervert our reason in order to pursue a greedy, selfish or lustful agenda all of our own. Conscience Alone and Reason Alone or the two together apart from divine revelation are unreliable guides because they depend upon ourselves understanding them aright and we are unreliable judges in our own cases.

What revelation, especially that contained in the person of Jesus Christ, Son of God and Son of Mary, gives us is a reliable guide. A standard arrived at through the honest and sincere exercise of conscience and reason is a "good enough" standard. The standard derived from revelation exceeds that infinitely, it is a "good measure, pressed down and shaken up and running over" (Luke 6:38) and it is unfailingly reliable since based not upon ourselves but upon the perfect one.

The Apostle Paul expresses his willingness to spend himself in the service of the Corinthians without expecting much of anything in return. Many might see in this an admirable thing but would note that there is nothing particularly Christian about it. Mothers spend themselves recklessly on behalf of their children if the need arises. Revolutionaries risk everything in the service of a cause whose success they do not expect to see. Nurses and doctors will volunteer to put themselves at risk to being healing and comfort to those in dangerous situations or with highly contagious diseases. Is there anything uniquely Christian about this?

Well, only this, Paul is making himself vulnerable and spending himself on behalf of the souls not the bodies, emotions or feelings of the Corinthians. He is motivated by the desire to help the Christians of Corinth enter into a deep personal relationship with the unseen God in an as yet unexperienced eternity. The Church identifies three particular characteristics which it calls theological virtues, faith, hope and love, and the Apostle displays all three of them here. He is willing to spend himself for the Corinthians regardless of their feeling for him because he loves them. He has hope that, by the grace of God, he will succeed, in bringing himself and others into the kingdom of heaven, he has faith that the means which will bring this about, which he is spending himself in bringing to Corinth, are fully contained in the revelation of God through Jesus Christ.

In short, St Paul is staking everything upon his conviction that Christianity is true and he is doing so exclusively to benefit other people. Again it could be argued that other causes provoke similar types of conduct in other people. Which brings us to the characteristic part of the Apostle's fundamental motivation which is contained in the word 'gladly.' Some may sacrifice themselves grimly or determinedly. Some may do so gladly in the sense of 'freely and without hesitation.' When St Paul use the word he means 'with gladness' 'joyfully.' The sacrifice is not one whereby he gives up his happiness that others may be happy. It is a fundamental condition of his happiness that he act in this fashion and failing to so act is what will make him grim and gloomy. The more fully we resemble Christ then the more fully we enter in His joy. And since the summit and purpose of His mission was to be broken and abandoned on the Cross of Calvary in order to spend and be spent for the sake of sinners then when we do the same we are clothed with Him and He inhabits our hearts, illumining them with the light of eternal love. This is clearly a way of being glad which we can only recognise and desire as a result of revelation and grace. And it is too a higher, better and objectively superior way to anything that conscience and reason apart from revelation can offer.

No human creature ever entered more fully into the life of Christ and so expressed the theological virtues at their furthest limit than Mary, the Mother of God. Standing at the foot of His Cross her total love for Him caused her to feel every agony that He felt such that there were two sinless people crucified on Golgotha that day. But, as if that were not enough, there was more, her love for Jesus extended to those for whom He was dying, ie all of us, so that in love and for love she offered up her sufferings on that dreadful mountain to God as a superabundant sacrifice to be added to the treasuries of God's grace. Even in those dreadful moments of Passion and death for her Son she never lost her faith that the revelation to her from God through Gabriel would come true and that Jesus would yet reign on the throne of David nor her hope that she would be by His side in heaven and on earth. In this Mary is our great role model and if we feel, as we should feel, that we are far from successfully imitating her she is also our most sweet advocate who will entreat her Son on our behalf to send us the graces we require to be conformed to Him through being like her.