With Mary to Jesus 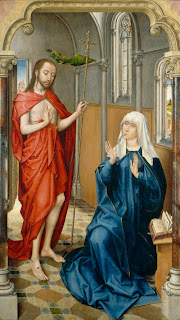 The same night the Lord said to him: Arise, and go down into the camp: because I have delivered them into thy hand. But if thou be afraid to go alone, let Phara thy servant go down with thee.
Judges 7:9-10

In the Book of Judges the nervous Gideon is shown several miracles by God and then given a commision to visit the camp of the enemy. You might think that witnessing the power of the Lord and being personally reassured by Him was enough but apparently it wasn't. Gideon remained timid, the flesh may have been willing but the spirit was weak. The Almighty could have taken offence at this but, as it happens, He didn't. He knows of what stuff we are made, as well He should, and so in addition to all the other things He had offered Gideon He made provision for a companion in the mission. Humans like to have someone to share the burden. We see something similar in Moses being granted the assistance of Aaron. Later Jesus would send out His disciples in pairs. Not that they needed each other to proclaim the Good News, to heal the sick or to perform miracles. No, they needed each other because they needed each other, that's just the way we are.

When Catholics say that Mary is given to us to help in our journey towards Jesus some other Christians argue that since Jesus is both the Way and the destination Mary's role is spurious. I think she is only spurious in the sense that Phara and Aaron and the twinned disciples were spurious, that is to say not at all. God does not change His way of operating. He knows that if we were perfect we could come to Him uncompanioned but it is precisely because we are not perfect that we need to come to Him at all. He gives us the gift of a mother, and of such a beautiful mother, since we know that Jesus is both our saviour and our judge. If we long for the one we rightly fear the other. Like Gideon we may have been reassured in multiple ways that our sins have been forgiven, washed away in the blood of the Cross, yet still we hesitate because we know how terrible they are and how often since we accepted Christ we have repeated them. And then gentle Mary comes to us, smiling and kind. She strengthens our hearts and taking our hands she walks side by side with us in our pilgrimage to her Son. And because she does this we make a pilgrimage that otherwise fear would have prevented us from setting out on. More souls have been saved by accepting Mary's help than ever will be by rejecting it.

Another way of looking at this can be seen if we consider this episode from the Lord of the Rings by the Catholic author JRR Tolkien-
"Filled suddenly with love for this old man, he knelt on one knee, and took his hand and kissed it. 'May I lay the sword of Meriadoc of the Shire on your lap Théoden King?' he cried. 'Receive my service, if you will!'"
(Return of the King, Chap 2)
The hobbit Merry was not simply pledging his service to Théoden, since the king was bound by oaths, loyalty, ancient friendship and love to Gondor service to Théoden automatically also meant service to Gondor. And in this double service Merry rode of to war on the fields of the Pelennor where he played a crucial role in destroying the chief of the Nazgûl. One could not love the king of the Rohirrim without also loving the cause of the people of Minas Tirith.

The same, of course, applies to Mary and Jesus. If she fills us with love, if we are touched by her example and by her person and so pledge ourselves to her she only accepts us so that she can deploy us in the service of her Divine Son and present us to Him as His faithful servants because we are hers. Jesus and Mary are not rival sovereigns with  rival servants like Abraham and Lot. They are a single sovereignty doing the will of the Father competing with each other, as it were, only in love, mercy and forgiveness.

There are any number of different ways of entering into our Lady's service. One is by beginning our day's activities with a prayer such as this-

Dear and most Blessed Lady, Mary.
As you brought Jesus to St Elizabeth when you visited her bring Him also to me,
As, by the Father's will, she was filled by the Holy Spirit at the sound of your voice may you send the Paraclete also to me.
That, strengthened by God and accompanied by you, I may bear my Cross in life, through death to the glorious resurrection in the name of Jesus Christ our Lord.
Amen

Frequently through the day, whenever you have a few seconds to spare, you can renew your Marian commitment by quietly or silently offering up this aspiration-
O Mary, guide me to your Jesus.
And then we can rest reassured in the truth taught to us by St Bernard that never was it known that any one who fled to her protection, implored her help, and sought her intercession, was left unaided.
@stevhep