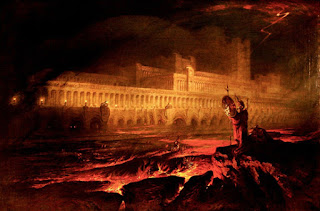 Not where the wheeling systems darken,
And our benumbed conceiving soars! -
The drift of pinions, would we hearken,
Beats at our own clay-shuttered doors.

The angels keep their ancient places-
Turn but a stone and start a wing!
'Tis ye, 'tis your estrangèd faces,
That miss the many-splendored thing.
(Francis Thompson)

The ideas conveyed by this poem, 'In No Strange Land', are fairly simple and straightforward; that God and His kingdom are all around us and that it is our self-induced blindness not His absence that cause us not to see Him. In commenting about it, then, it is easy to fall into banal commonplace remarks. This though would be to do a great misjustice to the poet who was intent not so much to convey ideas as to share with us his deep anguish and suffering.

The reality which he and we experience is that of estrangement. One senses that he is speaking to us with his body all bruised and battered from repeated assaults against the prison door seeking by the strength within him to tear it open. He does not experience despair but he does know the taste of bitter failure. It is no consolation to him to know that it is he himself that shut, barred and bolted the door. Before it opens he expects to experience more anguish, more distress, more suffering yet.

But (when so sad thou canst not sadder)
Cry- and upon thy so sore loss
Shall shine the traffic of Jacob's ladder
Pitched betwixt Heaven and Charing Cross.

Only when he is at his most extreme end of pain, so sad that he cannot be sadder, does he believe that his eyes will be opened, the door will be unlocked, the light will infuse his being.

Again, there is a temptation to say certain things which are theological truths but which in this context appear trite. Yes, he requires to be fully converted, to repent, to do penance. And yes, even then it is by God's grace not by His own labours that he can hope to see the face of God in Jesus Christ. But we do not know the state of his conscience, like Job's comforters we may be sharing platitudes which miss the mark.

It may be that it is his vocation to throw himself passionately against a locked door and bruise himself. This, not as a punishment nor in order to gain a reward but just because that is God's purpose for him. If he sat in stillness and quiet awaiting the Spirit to descend he might be defying God's will. And others if they did not so sit but imitated the poet would in their turn be defying the Father's will since He does not have the same purpose for each of us.

King David was inspired by God to build a Temple for Him in Jerusalem. But having implanted the desire in David the Father then forbad him to execute it. It sometimes happens that we are moved to attempt the impossible and then fail. God is love itself, and God is justice itself but we are too limited to understand what these things in their fullness really are. If He seems unloving and unjust to us and we go on doing His will anyway because it is our greatest desire to serve Him then perhaps we can understand this poem a little better. And pray for the soul of poor anguished Francis Thompson.
@stevhep

The painting is Pandemonium by John Martin