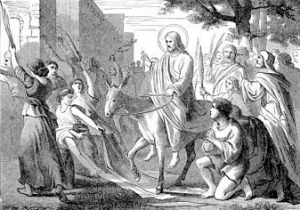 15 Thus, through his intervention, a new covenant has been bequeathed to us; a death must follow, to atone for all our transgressions under the old covenant, and then the destined heirs were to obtain, for ever, their promised inheritance. 16 Where a bequest is concerned, the death of the testator must needs play its part; 17 a will has no force while the testator is alive, and only comes into force with death

For those joyful pilgrims to Jerusalem who welcomed Jesus with such exuberance there was no thought of death. They believed, and rightly believed, that the path before His feet and theirs was the fulfilment of the promises of God, the glory and triumph of the heir of King David over His deadliest and most intransigent foes. They were right in their choice of a Champion of their cause. They were wrong in assuming that they knew who the enemy was and what was the weapon that would defeat him.

It was not Rome or the High Priestly party at whom Jesus aimed. It was at death and the power of death. And His weapons were submission, defeat and an agonising passing into the shadow of destruction. The ending of life and with it the apparent dashing of His hopes and those of His followers, the joyful, exuberant, hopeful pilgrims scattered and despairing, sheep without a shepherd.

In the day of optimism all surely remembered the words of Zecariah See where thy king comes to greet thee, a trusty deliverer; see how lowly he rides, mounted on an ass, patient colt of patient dam! Our Lord knew, if no one else did, that lowliness was not a cloak which He was about to cast off as He gloriously led an army to victory. Lowliness, humility, was not with Him a state of mind which could come and go. It was an essence, not an accident, of His nature. And to be true to Himself it could only be in and through and with this essential characteristic that He would fight His battle, secure His triumph and bequeath His inheritance to those who believed in Him. Jesus Christ, the same yesterday, today and forever.

Though these Palm Sunday crowds could not foresee the future nor as yet understand their Messiah and His purposes they were not wrong to rejoice. They thought that their case was that of the Psalm 12 Word has come from the Lord, good news borne on a multitude of lips: 13 Routed their kings, routed the armies; they have left their spoils for housewives to carry away; 14 never shone silver so bright on a dove’s feathers, never gold so fair on a dove’s wings; and you, all the while, resting quiet among the sheep-folds! And so indeed it was. But they gained their share of the spoils as legatees, inheritors of a Testament, not as warriors and their camp followers.

It was the way then, as it often is now, that adherents of religion mix their material desires with their spiritual in a confusion of hopes and fancies not without a hint of greed for possession and prestige. Palm Sunday should teach us that if we hope in Jesus we do rightly especially when we recall that a death must follow. Upon that death we must stake our lives. And the Kingdom we shall enter into is not of this world.