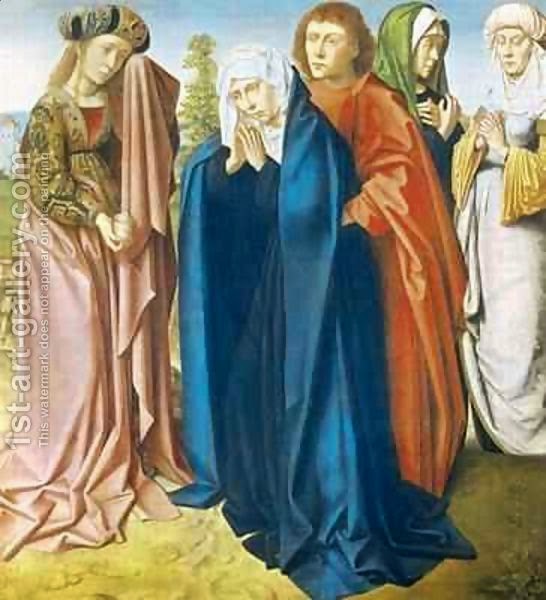 And taking a child, he set him in the midst of them. Whom when he had embraced, he saith to them:
(Mark 9:35)

This episode is included in three Gospel accounts but only St Mark includes the detail that Jesus embraced the child. It is, indeed, one of the characteristic features of Mark that such little human touches are recorded. For example, in all the accounts of our Lord asleep in a storm tossed boat only this Evangelist tells us that Jesus was "sleeping upon a pillow." (Mark 4:38) Tradition tells us that St Mark was secretary to the Apostle Peter and that essentially his Gospel account is a retelling of the stories which Peter himself first told him. Such little details as this certainly bear the hallmarks of an eyewitness account and the breakneck speed at which Mark rushes through the story with its profusion of 'at once's' and 'immediately's' certainly fits in with the impetuous personality of St Peter that is so vividly described in all four of the canonical Gospels.

However that might be the fact before us is that Jesus embraced the child. We can say that this was a gratuitous act. Had it been necessary to the point He was making then all the Evangelists accounts would mention it. It was unnecessary from the illustrative point of view but, in a sense, necessary from the point of view of a Sacred Heart overflowing with love. That is to say Jesus could not help hugging the child because He who is love Himself cannot act contrary to His nature and Incarnated love embraces a child and does not just use her or him as an instrument for however exalted a purpose. Humans, or indeed any creature, can never be mere instruments in the hands of love and human children least of all. So when Jesus set the child before the Apostles His primary purpose was to teach them a lesson about humility but in thinking about the Apostles He did not forget the child.

The embracing of the child in and off itself is a lesson to us. It teaches us that love must express itself and, moreover, that it must express itself in deeds as well as or instead of words. There is no record of our Lord speaking to the child, though no doubt He did, but there is this description of the embrace. There is an important point too about incarnation. Between Spirit and Matter there is a constant tension. A continuous dwelling upon the weaknesses of the flesh and the superiority of the Spirit could lead us into imagining that all Matter and its needs and desires are nothing but evil, total depravity, and all things of the Spirit are good because partaking of Divinity. Such indeed was the perspective of the various Gnostic heresies, like Catharism, and the idea can be seen to appear at various times within most religious traditions. The Incarnation of the Son of God and Son of Mary, however, means that Matter too now partakes of Divinity, flesh is indissolubly linked to God for all eternity. And so the happiness that the child felt at being embraced and the Love that expressed Himself in embracing that child have no part of evil and constitute undiluted good.

The truths which are taught in the Gospels are timeless but each generation comes to read them through the eyes of their own time. For us, at least in the West, the image of a man hugging a child raises at least subliminally feelings of anxiety. The scandalous abuse of many children by some men, including  ordained pastors, had sent shock waves deep into our consciousness. Reason may tell us that such abusers are few in number and that tactile expressions of love by men towards children are overwhelmingly innocent in intent. But subconscious anxieties are seldom susceptible to reason alone. The horror which we rightly feel at such crimes stirs up an emotion which is linked to an established fact, some men behave in this fashion, and as long as the horror endures so too shall the subliminal anxiety. This is another incarnational fact, humans possess reason but are not purely rational creatures.

The Church recognises that at times, on the wings of faith, we can rise above reason and soar into regions well beyond its limits. She recognises also that at times, weighed down by fear, we can fall below the level of reason. The response is not, or should not be, to chide and to scold. It is human to fear and to fear excessively is neither fully reasonable nor entirely unreasonable, it is simply human. If our mind accepts the image of Jesus embracing the child for what it is but our heart, in this generation, is troubled or subliminally uncomfortable about it then she proposes an alternative icon. The embrace of Mary is more than merely unproblematic to us it is an illustration of precisely the same point that Mary's Son was making. Overflowing love has and must have and is divinely ordered to have a physical expression. It is common to see images of our Lady embracing the child Jesus, I have one before me as I write this, but that is not the image I have in mind. At the foot of the Cross the Beloved Disciple was given into the care of Mary and he into hers. Who can doubt that they embraced, and which Christian is not a beloved disciple of Jesus? The lesson that Jesus and Mary teach cannot be defiled or befouled by criminal acts nor should we be afraid to proclaim it. Chaste love which does not express itself is incomplete at best and no love at all at worst.