Silver & Gold I Have None 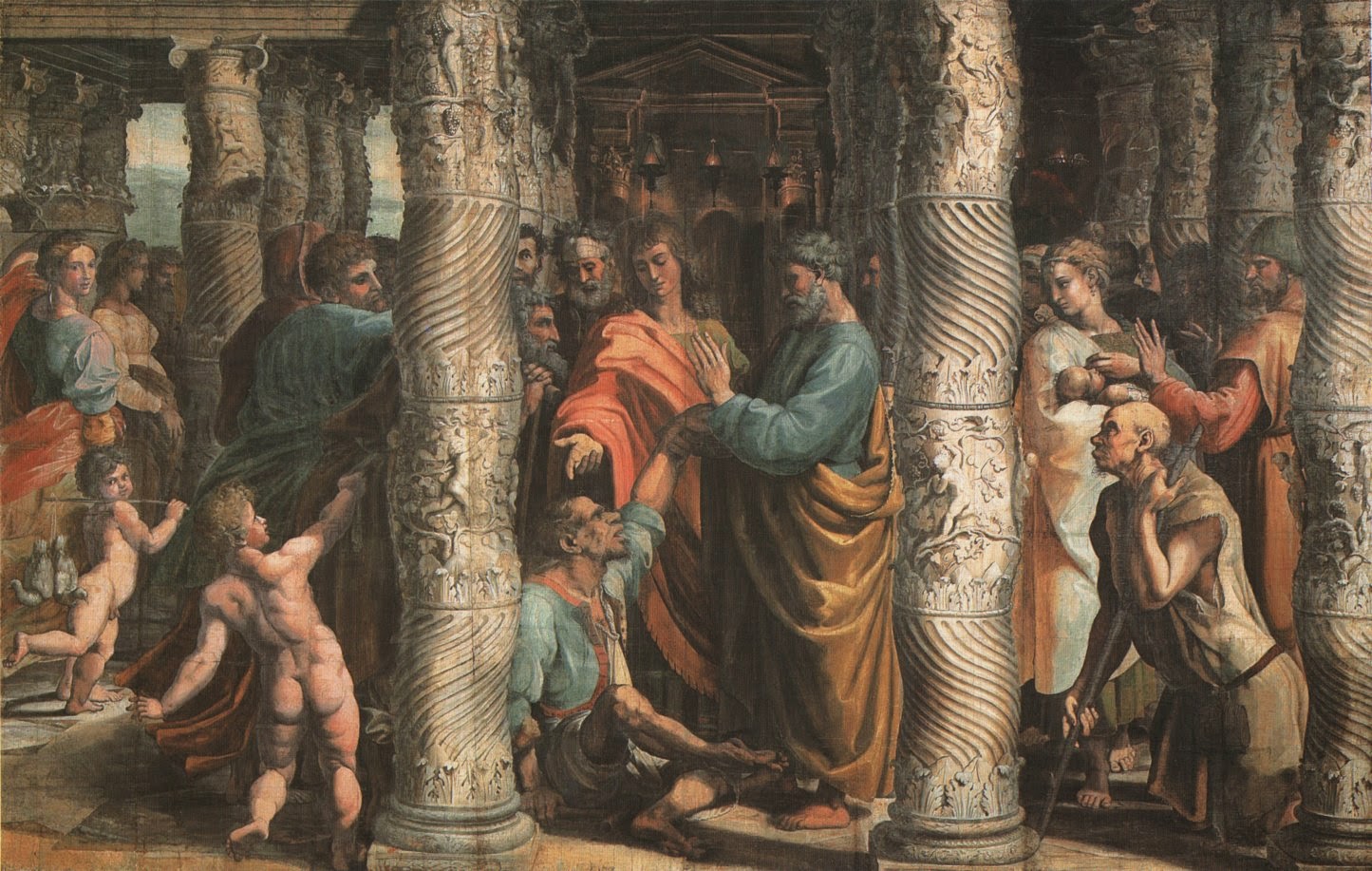 Healing of the Lame Man-Raphael


Peter with John fastening his eyes upon him, said: Look upon us. But he looked earnestly upon them, hoping that he should receive something of them. But Peter said: Silver and gold I have none; but what I have, I give thee: In the name of Jesus Christ of Nazareth, arise, and walk.
Acts 3:4-6

Turn my heart to Your decrees and not to material gain. Turn my eyes from looking at what is worthless; give me life in Your ways.
Psalm 118/9:36-36

There is a lot of looking going on in these texts. Sight is one of the mechanisms which we use to give our attention to something. Attention is the primary thing and vision is a mere auxiliary to it. What I mean by that is that although no doubt none of us wishes to go blind if it so happened that we did then our integrity as a person would remain intact. Our ability to focus our mind to a point and concentrate upon it would remain unimpaired although it would be discommoded. If however while still possessing sight we lost the ability to pay attention to anything then we would cease to be the person we are now. When considering texts like this then it can be a worthwhile exercise to leave aside consideration of the external events unfolding before the eyes and think about the essential objects upon which the attention of the participants, and by extension we the readers, is centred.

The disabled man whom the Apostles encountered desired to live. He was begging because only thus could he obtain the means necessary to that end. His attention was focussed on Saints Peter and John because he hoped that they could help him to keep body and soul together. His desire was a purely material one. There is a temptation to suppose that the intention of St Peter was equally material, to effect a bodily healing, and that what he gave to the man was good health. We should though bear in mind the words of Jesus 'Which is easier: to say, ‘Your sins are forgiven you,’ or to say, ‘Get up and walk’? (Luke 5:23) The gift which St Peter gave was the name of Jesus, one of the effects of that gift was to heal the man's disability.

The post-modern mind is often impatient with miracle stories and seeks to discount them. So much the worse for the post-modern mind of course but if, as I suggest, we concentrate on the essence rather than the accidents of this episode is there anything in it which even the post-moderns can profit from? The beggar was in the position of most people in the secular West. He knew little about Christianity, cared less and expected next-to-nothing from it. To him the two Apostles were simply people who could assist him in achieving his immediate aims. There is a sense in which religion must have been important to him since he was begging at the gate of the Jerusalem Temple. Beggars are pragmatists, they beg where they will get results not where they will be ignored. Even today you will find much more begging outside of the doors of a cathedral than you will at a science museum, art gallery or supermarket. So then, our disabled man recognised the charitable impulses of many religious his object was to receive charity theirs was to give it.

St Peter here represents both the Christian Church and, in a sense, Jesus or at least the intentions of Jesus. He is concerned first and above all with the spiritual well being of the beggar but also with his physical well being. He gives him then the only thing which he has, the name of Jesus, and that effects a creation of wholeness in the man. A physical, easily observed wholeness to be sure but more than that St Luke (the author of Acts) also records 'he entered the temple complex with them—walking, leaping, and praising God' (Acts 3:8) The praising God thing is important because there was no inevitability about it. Jesus knew this only too well 'one of them, seeing that he was healed, returned and, with a loud voice, gave glory to God. He fell face down at His feet, thanking Him. And he was a Samaritan. Then Jesus said, “Were not ten cleansed? Where are the nine? Didn’t any return to give glory to God except this foreigner?' (Luke 17:15-17) Physical healings, miracles, do not inevitably produce faith or even gratitude for that matter. What is important to a person, the things which she gives most attention to, are what produces the most profound of her reactions and that does not always include an appreciation of what others have done for her. 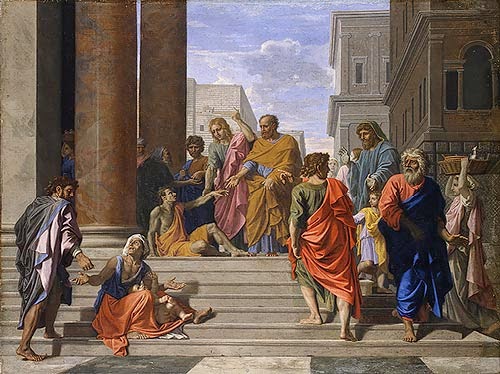 If the disabled man is a representative figure for those outside the Church who sometimes turn to it with requests what can we say of their intentions and expectations? There is nothing supernatural in them. Nor are they necessarily strictly material. Many in the West will seek a brief comfort in the liturgies or even just the buildings and candles of the Church at times of great sorrow, tragedy or distress. The beggar in our text, like many beggars today, would not doubt have wanted money first and foremost but would also appreciate a moment of human contact, a smile, a nod, a friendly conversation. I think it fair to say also that, at least subconsciously, people expect to receive more from Christians (again not just in a material way) than they do from others. An expectation that seems to stubbornly remain no matter how often it might in practice be disappointed. This is grounded in a feeling that the standards of Christianity and the person of Jesus are of such a sublime nature that some of it must rub off on Christians (although sadly all too often it just doesn't.) The intuition is a sound one so far as the standards go and if it doesn't flow from personal experience then I would think it fair to attribute it to the work of the Holy Spirit, it is a gift of grace.

And what of  the same encounter viewed from the other side that of St Peter/the Church? Firstly we should note that he was not alone, St John accompanied him, which reminds us that the Church, that Christianity, is a collective enterprise not a solitary one. Conservative Catholics blanch at the use of the word 'collective' because it stirs up thoughts of communism. At the risk of sounding Chestertonian I would say that everything truly evil is always but an imitation of Christianity perverted to wicked ends. It is only mediocrity that does not imitate Christianity although all too often Christians and the Church imitate mediocrity (for more about Chesterton see my post G. K. Chesterton & the Square Circle).  What was the focus of St Peter's attention? Apparently two things, his faith in the name of Jesus and his compassion for the plight of the indigent man with a disability. But, of course, the two were one. For a Christian it is true that faith and compassion are a single thing, they cannot be separated. Faith and compassion without deeds is a pointless thing so St Peter was moved to action. The beggar wanted money, the Apostles had no money, so Peter did the only thing he could do. He prayed, he involved Jesus in the business of changing the world, and he did so without hesitation and without doubt. And, behold, the world was changed.

Unlike the Apostles the Church does have access to money and like them it has an obligation to make faith real in the world through deeds. In this episode we have a guide to what that means. Faced with an appeal the response must be instant, it must be collective, it must involve human contact (giving money to a third party to do compassion for you doesn't cut it) it must be practical, it must involve prayer and it must be rooted and grounded in the name and person of Jesus Christ. More than that we should recall that although conversion was an effect of the healing it was not a condition for it. The Church is bound to help for the sake of being helpful not for the sake of gaining members.' If you know these things, you shall be blessed if you do them' (John 13:17)