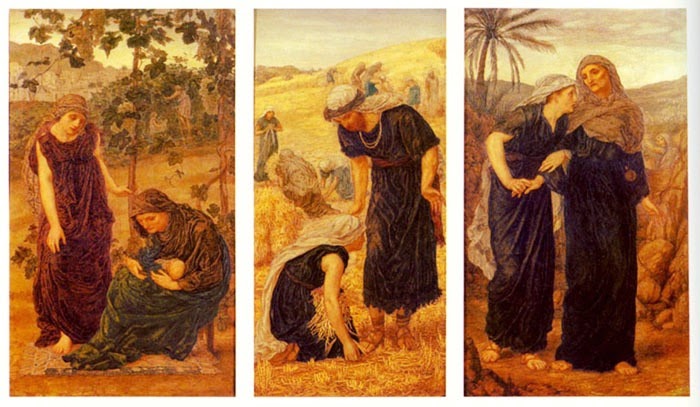 Say not ye, There are yet four months, and then cometh harvest? behold, I say unto you, Lift up your eyes, and look on the fields; for they are white already to harvest.
John 4:35

And Ruth the Moabitess said unto Naomi, Let me now go to the field, and glean ears of corn after him in whose sight I shall find grace.
Ruth 2:2

The gulf of incomprehension between Catholics and Christians from the ecclesial communities of the 'Reformation' (Protestants for short) on the subject of devotion to Mary is fuelled in part by the radically different ways the two traditions read the Old Testament scriptures. The man who inspired the 'Reformation' Martin Luther said "The Christian reader should make it his first task to seek out the literal sense, as they call it. For it alone is the whole substance of faith and Christian theology" This means that what appears on the surface of the written words is sufficient in itself to convey all that we need to know about God. Catholicism, by contrast sees four levels or senses of Scripture. The literal is the foundation of all the others but it does not exhaust the content of Divine revelation, so if we rest in it alone then we miss out on all that the Lord intends to convey to us via the medium of the sacred texts.

For example, we can believe that the crossing of the Red Sea was both an historical event and a pre-figuring of baptism. Protestants will accept this because St Paul said so (1 Corinthians 10:1-2) They are reluctant however to apply the same kind of approach to those scriptures where there is no explicit scriptural mandate to do so. Catholics are not so timid. An allegorical reading of a passage which does not deny or contradict the literal sense, which is consonant with the faith received from the Apostles and which helps us to better understand and more deeply love God is a perfectly acceptable approach to studying scripture. By using it Catholicism arrives at the idea that the New Testament is hidden within the Old, that is, concealed under persons and events, and so the New reveals the meaning of the Old. Christians and Jews therefore will read these Scriptures in radically different ways unless the Christians adopt the Lutheran approach which bring them close to the Jewish methodology.

And so we come to Mary. Catholics understand many OT passages to refer to the Mother of Jesus, her life, her personality and her role in the history of salvation. Since Protestants see nothing more in these passages than the events, persons or places described in them they simply don't 'get' what Catholics are on about when discussing our Lady and so accuse them of importing extra-biblical ideas and practices. In this blog, as my contribution to ecumenism, I propose to look at the eponymous heroine of the Book of Ruth and see in what way she prefigures Mary as refuge of sinners. 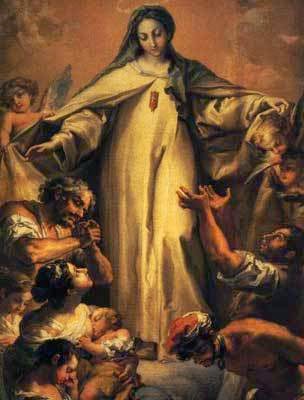 Our Lady of Ransom

In my earlier blog Mary & Eternal Life I looked at a number of the ways in which Ruth acted as a type or figure of our Lady here I will look at some others. By 'type' is meant that what is done in part and imperfectly in the OT is brought to fulfilment and perfection in the Gospel and forms part of the economy of salvation. So, Ruth sets out to glean the ears of corn which the reapers leave behind in order to be able to feed Naomi her mother-in-law and herself. When, in the Gospels, Jesus speaks of harvesting He usually means gathering in souls to the kingdom of heaven. Since He speaks through the Old Testament as well as the New it is worth considering the possibility that references to the same subject in the one will have the same purpose as in the other. When to this harvest is added the figure of Ruth following 'after him in whose sight I shall find grace' we are irresistibly reminded of the words of St Gabriel 'Fear not, Mary, for thou hast found grace with God.' (Luke 1:30) It seems then legitimate to read this passage as an allusion to the role played by the Mother of God in bringing into the kingdom those who escape from the hands of the reapers.

What Mary gleans are those who have heard the Good News about Jesus but have not benefited by it. They lie on the earth having missed salvation but not yet consigned to destruction. It seems likely to me that these are not necessarily greater sinners than the saved but they are guilty of the sin of despair. They feel themselves to be so wicked or to have committed such terrible acts that there is no possibility of them being forgiven and so they fear greatly to come into the presence of our Lord never doubting that condemnation will be the only outcome of that encounter. The Protestant approach is basically to say 'pull yourself together, Jesus will forgive you if you repent.' This is perfectly true of course but nonetheless it is a psychological fact that many people find themselves unable to overcome that fear of the Just Judge. So either we consign them (by them I mean of course me) to the flames or we offer them another route by which they can come without fear into the presence of the Saviour. The Church asks 'if you fear the Son do you also fear the mother?' And who can fear Mary? The despairing can turn to her and she will raise them from the earth, gather them in her arms and present them to her Divine Son who can refuse nothing from the hands of His most beloved mother. To the accusation that Catholics, through the cult of Mary, add an unnecessary barrier between Christians and Jesus we can reply that on the contrary Marian devotion give us a bridge that bring those who would otherwise be furthest from Him straight into His Sacred Heart.

The labours of Ruth are described thus: 'This is the Moabitess who came with Noemi, from the land of Moab, And she desired leave to glean the ears of corn that remain, following the steps of the reapers: and she hath been in the field from morning till now, and hath not gone home for one moment.' (Ruth 2:6-7) This sounds like Mary who went 'with haste' to support St Elizabeth (Luke 1:39) who stood unflinching at the foot of the Cross (John 19:25) and who constantly prayed at the heart of the Church (Acts 1:14) Her personality has not undergone a change for the worse since she was raised to heaven. If she worked tirelessly for the kingdom of her Son then how much more she does so now. The sinner, fallen from a state of grace and despairing of entering into it again will not call to her in vain. The field in which she works is filled precisely with the lost, the furthest from God, the ones guilty of the most gross sins. Those whose desire to be reconciled is finely balanced with their expectation of damnation will through Mary receive the grace and strength which they need to make that decisive choice, to be transformed through repentance leaving a life wholly given over to darkness behind them, entering the kingdom of light and themselves performing acts of light.

Space does not permit me to say all I could on this subject. So as homework I will leave you to ponder on how much this prayer offered for Ruth was fulfilled in Mary 'The Lord make this woman who cometh into thy house, like Rachel, and Lia, who built up the house of Israel: that she may be an example of virtue in Ephrata, and may have a famous name in Bethlehem' (Ruth 4:11) To the separated brethren of the Protestant traditions I say do not close your eyes to the treasures hidden in Scripture, the whole substance of faith and theology consists in more than a description of events, persons and places. And to those who fear to be excluded from the company of Jesus because they know themselves to be so hardened in wickedness I say put you hand into Mary's hand, she will lead you into His presence and He will have only smiles and love to offer to anyone who accompanies His mother. Mary, refuge of sinners, pray for us. 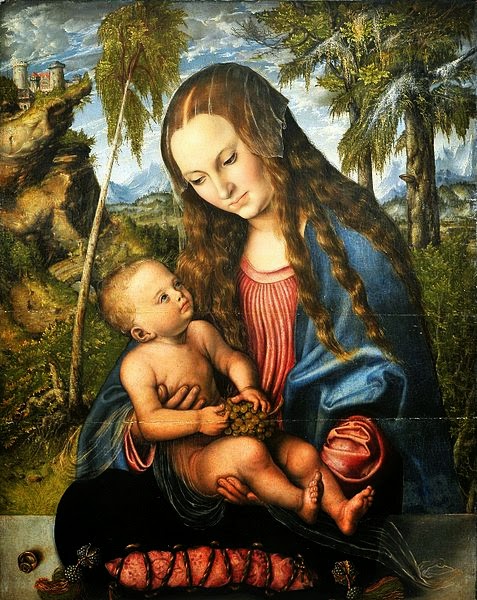 Madonna under the Fir Tree- Lucas Cranach the Elder