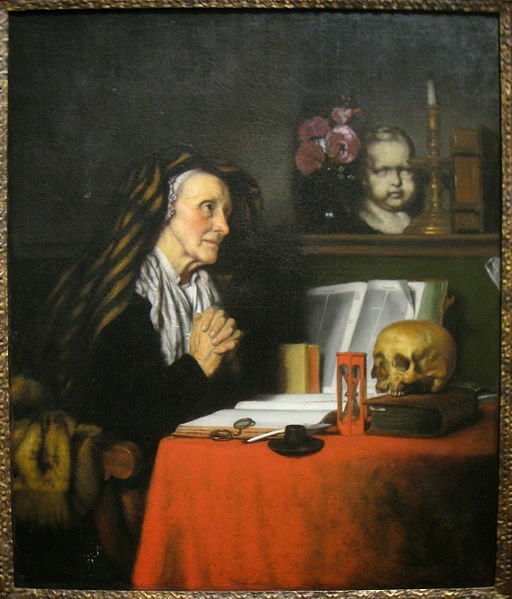 Some Christians think that Centering Prayer is an invaluable way to deepen their spiritual lives, others think that it is the work of the devil and many more have never heard of it. For the benefit of the latter I shall briefly summarise it based on this leaflet (pdf)

1. Choose a sacred word as the symbol of your intention to consent to God’s presence and action within.

2. Sitting comfortably and with eyes closed, settle briefly and silently introduce the sacred word as the symbol of your consent to God’s presence and action within.

3. When engaged with your thoughts*, return ever-so gently to the sacred word.

4. At the end of the prayer period, remain in silence with eyes closed for a couple of minutes.

On the subject of choosing the 'sacred word'-
The sacred word expresses our intention to consent to God’s presence and action within.
The sacred word is chosen during a brief period of prayer asking the Holy Spirit to inspire us with one that is especially suitable for us. Examples: God, Jesus, Abba, Father, Mother, Mary, Amen. Other possibilities: Love, Peace, Mercy, Listen, Let Go, Silence, Stillness, Faith, Trust, Yes.

The practice is recommended for 20 minutes a time, twice a day. Its proponents argue that it is based on an ancient Christian practice referred to in, for example, the medieval English work The Cloud of Unknowing which is true so far as it goes. It is no coincidence, however, that this practice emerged and was publicised at a time when Eastern meditation techniques based on Hindu or Buddhist mantras were gaining many adherents in the West. Indeed it is strikingly similar to Transcendental Meditation which also recommends two twenty minute periods with eyes closed. There is nothing intrinsically wrong with Christianity appropriating and Christianising this or that aspect of non-Christian cultures, philosophies or practices, The key question is always: does this provide a bridgehead to advance Christianity into new areas or a breach to permit non-Christian beliefs to invade the Church? In the case of centering prayer we can only answer that question when we have some sense of its benefits or risks.

Some critics contend that repetitive prayer is wrong and unbiblical. In that I think that they err. Repetitive prayer in a variety of forms has been a continuous practice of the Christian Church, Catholic and Eastern Orthodox, for at least 1800 years most widely today in the forms of the Holy Rosary and the Jesus Prayer. The experience of the Church is that such prayers confer immense spiritual benefits on those who use them, on the Church as a whole and on the wider world. There is, however, a difference between  prayer based upon a sentence or phrase which contains a clear meaning and a particular aspiration and praying a single word with no specific content attached to it. It is the difference between active and passive. There is a place for passive prayer within Christianity but it needs to be recognised as a particular category and cannot claim close affinity with its more active cousins.

I suppose the first question to be asked about any form of prayer is- what is purpose does it serve? The first word of the prayer which Jesus gave us is 'our' as in Our Father. This teaches us, among other things, that God does not wish to save us as mere individuals but as individuals in community. All Christian prayer has both a vertical direction towards God and a horizontal one towards our neighbours particularly to those in the family of faith. To pray passively, opening ourselves up to the still small voice of God in our hearts, is a means to strengthen us in our active lives of faith. Practically all the great contemplative pray-ers of the Catholic faith such as St John of the Cross and St Teresa of Avila were enormously active and creative people who contributed largely to the Christian life of their time. When the emphasis lies in the personal benefits of centering prayer rather than in the contribution it can make to the life of loving service demanded of all Christians then it veers towards a sort of quietist form of therapy which produces undoubted personal benefits like calmness. There is nothing wrong with therapeutic meditation but it is not a form of prayer.

For a prayer to be Christian it requires both its form and content to be in harmony with the faith of the Nicene Creed. The person praying is establishing or strengthening her personal relationship with the Father, through the Son in the power of the Holy Spirit. It cannot then be a matter of indifference what word or words they use in that prayer. The word is only unimportant if it is a sort of background noise to lull the active mind to sleep while the rest of the person rests in a sort of zone of self-induced calm. What a pray-er should seek is a living connection with the living God and the tradition and experience of the Church suggests that pre-eminently the name of the Lord serves that function. Not because it has some magic mystical power but because every time a Christian uses it it calls up within them consciously and unconsciously a memory of all that they know and love about Him and this activates the heart in a movement of love towards Him. The name of the god-bearer Mary can also have a similar effect because by a special gift of the Lord she has been privileged to convey Jesus to us and us to Jesus. This is not to say that other words should never be used but I suggest that we impoverish our prayer when we exclude the names of Jesus and Mary from it.

Looking at the tradition which centering prayer claims to draw inspiration from, The Cloud of Unknowing, the key passage (at the end of chapter 7) is this-
And if thee list have this intent lapped and folden in one word, for thou shouldest have better hold thereupon, take thee but a little word of one syllable: for so it is better than of two, for ever the shorter it is the better it accordeth with the work of the Spirit. And such a word is this word GOD or this word LOVE. Choose thee whether thou wilt, or another; as thee list, which that thee liketh best of one syllable. And fasten this word to thine heart
This seems to be a straightforward enough source to draw upon but I think that it overlooks two key points. Firstly the preceding passage includes this-
Yea, and so holy, that what man or woman that weeneth to come to contemplation without many such sweet meditations of their own wretchedness, the passion, the kindness, and the great goodness, and the worthiness of God coming before, surely he shall err and fail of his purpose. And yet, nevertheless, it behoveth a man or a woman that hath long time been used in these meditations, nevertheless to leave them, and put them and hold them far down under the cloud of forgetting, if ever he shall pierce the cloud of unknowing betwixt him and his God
(apologies for the old English the more modern translations are still under copyright)
Clearly the author has in mind that what we call centering prayer is a late stage in a process of growth in prayer life which is preceded by, among other things, a contemplation of our own sinfulness and the goodness of God. One arrives at the 'sacred word' after perhaps years of contemplation and prayer which helps us to discover just what that singular word might be. To begin centering prayer without this preliminary process might or might not be a good idea but it clearly isn't what the author of The Cloud of Unknowing had in mind.

The second thing overlooked is the monastic context of this form of prayer. Those who used it also prayed the Divine Office (based on the psalms) seven times a day, went to Mass daily, were subject to the authority of a Rule and an Abbot (or Abbess), and had a confessor and/or spiritual director. Not only this but all parts of their lives, including their prayer lives, had a community dimension. Even hermits prayed the Office as a part of the praying Church not purely as individuals. It is certainly reasonable to adapt monastic forms of prayer to the use of people living in the world but that does not mean plucking out this or that attractive aspect of it and dumping all the rest as unappealing. The Church is possessed of much wisdom in such matters and these forms have come into existence and endured because they serve a good purpose. Not least they remind us of the 'our' of the Our Father.

My conclusion is that the practice of centering prayer is valuable and Christian only where the person who uses it situates it within the context of, as it were, a cloud of related practices. Each person should have their own little Rule. Ideally they should not choose that Rule for themselves but accept it from a wise spiritual director or at least from an Institute or organisation steeped in the prayer life and practices of the Church.That Rule should include daily reading or chanting of the psalms. The argument that much of the content of these psalms is difficult or even repugnant to the modern mind is no reason not to use them. Prayer at times ought to be hard work, we do have to make an effort, it is a struggle. Repeated reading of the psalms with the mind of the Church enables us in time to crack the nut and get to the sweet kernel within, if that takes years or decades well then let it take years or decades. The Rule should also include frequent resort to the sacraments since these give us strength and reaffirm our rootedness both in Christ and the community of the Church. And the Rule should make it plain that the object of centering prayer is to know God better, to love Him more and to serve our neighbours with all our strength.