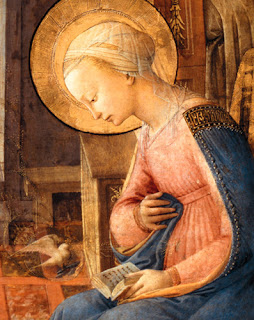 He sent forth also a dove after him, to see if the waters had now ceased upon the face of the earth. But she, not finding where her foot might rest, returned to him into the ark: for the waters were upon the whole earth: and he put forth his hand, and caught her, and brought her into the ark. And having waited yet seven other days, he again sent forth the dove out of the ark. And she came to him in the evening, carrying a bough of an olive tree, with green leaves, in her mouth. Noe therefore understood that the waters were ceased upon the earth. And he stayed yet other seven days: and he sent forth the dove, which returned not any more unto him.
Genesis 8:8-12

The Coptic Christians, whose ancient communities are enduring a prolonged martyrdom in the Middle East, have long given the Blessed Virgin the title of The Beautiful Dove because they see a type or figure of our Lady in this story from Genesis. In common with all of Christendom prior to the time of Luther the Copts find the New Testament present within the Old. In its pages, the stories, the people, the artefacts used, the sacrifices offered and so on everything which Jesus and the Apostles make plain can be seen under a veil as it were. Christians have long delighted in piercing that veil and in unfolding into plain sight the truths which we can now see thanks to the revelation of Christ and the faith passed on through the Apostles. The three journeys of the dove are types of, respectively, the girlhood of Mary, her role as Mother of God and her Assumption into heaven.

The earth covered in waters represents a world drowned in narrow materialism, sin and self-regard. From the moment of her Immaculate Conception our Lady became a pilgrim: in this world but not of it. Noah and his family in the Ark stand for the anawim the humble righteous ones looking with hope for the coming kingdom which would dry up the waters and flood the world instead with the spirit of love and devotion. Mary became in a special way the representative and ambassador of the anawim. She flew forth across the waters filled with love and hope but could find nowhere where here foot might rest. She was sustained only by the wings of faith and the winds of the spirit. Finally she came to rest in the hands of St Ann, her mother, and St Joseph, her betrothed.

At the Annunciation she takes to flight once more, the wind beneath her wings is the Father who chose her, the Holy Spirit who espoused her and the Son who was formed in her virginal womb. Already the waters have begun to diminish, St Zechariah, St Elizabeth, John the Baptist, Simeon are so many islands emerging into the light and filled with the joy of a new birth in and for the earth. The dove returns, so the Septuagint tells us- "carrying a bough of an olive tree, with green leaves, in her mouth." This symbolises the Passion of her Son, the tree reminds us of the Cross of Golgotha, the leaves of the Resurrection and Ascension. The combination of the two reminds us that life and death are united in the Crucifixion and that life has the final triumph. It carries too an echo of the words of our Lord on His Way of the Cross "if in the green wood they do these things, what shall be done in the dry?" (Luke 23:31) That this Good News is borne in the mouth of the dove recalls also the canticle of praise that came from Mary's lips, the Magnificat-
My soul doth magnify the Lord.
And my spirit hath rejoiced in God my Saviour.
Because he hath regarded the humility of his handmaid; for behold from henceforth all generations shall call me blessed.
Because he that is mighty, hath done great things to me; and holy is his name.

The receding of the waters is a symbol for the completion of the redemptive work of Jesus, sin and death have been finally conquered. The dove resting in the Ark among the family of Noah represents Mary after the days of the Passion, Ascension and Pentecost resting in the family of the Church. And after she completes her full time on earth (in the scriptures the number seven is a signifier for completeness) she flies one more time, raised by the angels to be reunited once more and forever with her Risen and Glorified Son. We are more fortunate than Noah, however, for if the dove never returned the Virgin certainly has many times. Because of the victory won by her Divine Son she now has numerous places upon which she can rest her foot, above all in the presence of the Christian anawim the St Bernadette's the St Juan Diego's the humble poor to whom she delights to appear at Lourdes in France, at Tepeyac in Mexico, at Fatima in Portugal and in numerous places. Always she carries with her the olive bough with the green leaves reminding us of her Son, of His Passion and Resurrection of the hope that He brings to the world and of the need for us to turn to Him with repentance and love.

The Beautiful Dove has not forgotten the Copts of Egypt. In the late 1960's as our Lady of Light she appeared at Zeitoun in Cairo perhaps to prepare them for the torment of persecution they now face. The dove of Noah symbolises hope, life appearing from out of a dead earth. Mary, the God bearer, is a sign for us of that hope and she brings to us the One who in His Person defeats death and the forces of darkness. May we all turn to her and join our prayers with hers on behalf of the Christian people of the Middle East. By the grace and power of God may it be that the dove of peace, the dove of light, the dove of joy, the Beautiful Dove may find her home in the lands that gave birth to our Christian faith. It is in Egypt too that we find the oldest of all prayers to Mary the Sub Tuum Praesidium-
We fly to your patronage, O holy Mother of God; despise not our petitions in our necessities, but deliver us always from all dangers, O glorious and blessed Virgin
@stevhep


The painting is a detail from The Annunciation by Fra Filippo Lippi
Posted by Catholic Scot at Tuesday, July 28, 2015