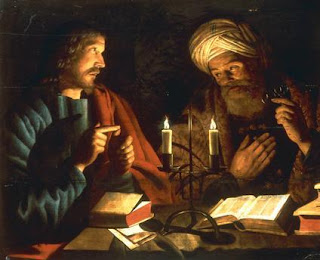 Nicodemus said to him, ‘How can anyone be born after having grown old? Can one enter a second time into the mother’s womb and be born?’  Jesus answered, ‘Very truly, I tell you, no one can enter the kingdom of God without being born of water and Spirit
John 3:4-5

"What's in it for me?" is a perfectly reasonable question to ask whenever someone tries to persuade you to take a risk. It may not be the only or even the most important question but it is certainly one which can legitimately be put. One cannot, therefore, blame non-Christians for taking it into consideration when hearing the appeals of evangelisers to be 'born again in Christ Jesus.' To people who believe in neither heaven nor hell the promise of the one and the threat of the other will make no impression. Likewise those who have no sense of sin are conscious of no burden of guilt from which they have to escape. None of these things then can be advanced as being relevant to the "what's in it for me?" criteria.

The idea that the population would be susceptible to such appeals is the heritage of a time which has now past. Where you have a society in which almost everyone accepts the basic ideas of Christianity the task is to energise them, to get them to move from theory to practice. In the West today there are few if any such societies so the strategy requires to be revised. Fortunately the Church has experience in dealing with a world in which most people were ignorant of, indifferent to or antagonistic about basic Christian doctrines. This was the gentile world of the first century Mediterranean where the Apostles and their associates did the work of planting the Catholic Church in the first place. I think that they made three distinct promises which each convert would receive as a gift when becoming converted to the faith, promises which the Church can still make and which provide the answer "this is what is in it for you."

The first is this; new Christians will receive the Holy Spirit. This was clearly an expectation in the primitive Church "Paul passed through the inland regions and came to Ephesus, where he found some disciples.  He said to them, ‘Did you receive the Holy Spirit when you became believers?" (Acts 19:1-2.) The idea that this is something which will necessarily cause people to jump about shouting Hallelujah! and waving their hands does not on the face of it make it an attractive promise to many people. However this is not the case. The Spirit is infinite and infinitely variable, He manifests Himself in many ways. In some He descends like a thunderbolt and sets them aflame and keeps them aflame for a lifetime. In others He gently infuses himself into the mind and heart slowly turning them into havens of peace and joy. What is certain is that He makes Himself present to believers in ways that He does not to those who reject faith (the Holy Spirit is certainly at work in non-Christians but the form and content of that work is qualitatively different from that among those united to Christ.)

The second promise is Christ Himself. Him you will certainly receive. By this I mean the whole Christ not the attenuated wise teacher of so many timid sermons or relativist theologies. The full red-blooded Son of God and Son of Mary, crucified on Calvary, risen from the dead, ascended to the Father. Many people have a vague idea about Jesus, He is a sort of blank space of vacuous goodness upon which can be written or projected whatever a person wants to impose upon Him. He is cited in defence of this political project or that abnormal form of conduct. A Christian receives Him in all His dimensions, present in the Gospels and all Scripture, made present in His body the Church, seen suffering in the world among the vulnerable and outcast, encountered under the appearance of bread and wine in the Eucharist.

And then there are miracles. Many Christians get a bit shifty when it comes to miracles explaining that biblical accounts are either metaphors or psychological cures for psychosomatic ailments. There are healing ministries in places but these are out of the mainstream and all too often tainted with charlatanism. Yet the scriptures couldn't be clearer "Now many signs and wonders were done among the people through the apostles" (Acts 5:12.) The early Church was acquainted with the miraculous and that was part of the package that believers signed up to. Nowadays educated opinion frowns on the idea so the Church often appears apologetic about it or hushes it up altogether. This approach is nonsense, if Christians believe that Jesus rose from the dead why should they disbelieve in varicose veins being healed? Moreover impressing the intellectual elite is not the sole purpose of the Church, millions of people do not have an a priori belief that miracles cannot happen therefore they do not happen and to close off from them this part of the Good News because we are afraid of appearing foolish in front of the worldly wise is a dereliction of duty.

Certainly the possibility of fraud or hysterical temporary 'cures' is always present when miraculous healings are the matter at hand. The Church has no interest in such things save to denounce and expose them. Nonetheless there are inexplicable cures and events associated with Christianity. The case of Lourdes provides a template for what is possible. Claims of cures are not accepted until thoroughly investigated by qualified physicians, including those who are not associated with the Church and are sceptical of her faith. A miracle is not declared until some very tough criteria have been met. The point about this is not that miracles are common, by definition they are exceptionally rare, so that believers can expect to have their problems solved by them. No, the point is that by accepting the Christian faith a person begins to inhabit a world, a universe, in which the miraculous is possible. Their experience of life is fundamentally altered by this simple change of perspective. The little pamphlet A Protestant Looks at Lourdes (PDF) by Ruth Cranston gives us a glimpse into this-
" Time after time I have been told at Lourdes—by doctors, nurses, brancardiers, even by the man who sweeps the paths: "The sick? Oh, Madame, they've forgotten about their own cure. All they care about is that the man in the next row shall get well. . . . 'Don't bother about me—that fellow over there needs you more.' . . . 'Never mind, nurse, I can wait.' . . . 'Look after this poor lady in the next carriage—she really needs attention'."
Naturally the pain comes back again, but it hasn't the same hold. Their minds are not centred on it any longer. And when the time comes to go home, though they haven't been physically cured, though they know what hardships and suffering yet another pilgrimage will mean, their one cry is: "If only I can come back next year! If only I can come again to Lourdes!"

So, "what's in it for me?" You get the Holy Spirit, Jesus and miracles. The proof of all this is experimental, that is these are gifts that you can only have by having not by being told about. The invitation to be born again is a risk, there is so much that you have to give up, to leave behind. But there is also so much to gain. The choice is yours to make.
@stevhep