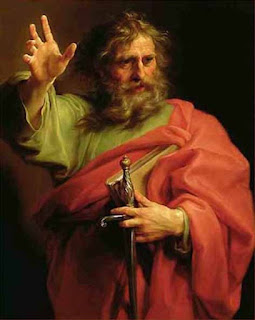 As Paul went on and on, a young man called Eutychus who was sitting on the window-sill grew drowsy and was overcome by sleep and fell to the ground three floors below.
Acts 20:9

If Eutychus isn't the patron saint of ordinary churchgoers then perhaps he should be. On days when the sky is blue, the sun is warm, the sermon is dull and a tall glass of something cool is waiting for you outside then who is the one whose attention would not waver at least a little? I don’t think that this is a cautionary tale (spoiler alert: it has a happy ending) its more an observation that even in the presence of the famous Apostle to the Gentiles human flesh is weak. If it were not there would have been no need for the Incarnation.

There are many positive arguments that can be made in favour of churchgoing but Eutychus I think points us towards a negative one. Church services can be dull or worse than dull. And that's not necessarily a bad thing. The temptation to think that the Church can pretend to be a part of the entertainment industry is something that should be firmly resisted. However well put together a service is, however many guitars or flashing lights that it has there will always be something much, much better to watch on TV or YouTube. If the demand of churchgoers is ‘entertain me’ then they need to be challenged but I don't think that that is what they/we do demand whatever worried pastors with declining congregations might think. Lively, inspiring and enlightening homilies are always welcome. Worthily celebrated sacraments are gratefully received. But even when these are not present there is still a reason to turn up week after week and if necessary do a Eutychus.

Our daily lives are filled with dull moments, with mediocrity, with routine. The thousand and one necessary things which we have to do, go to the shops, buy petrol for the car, endure a long commute, listen to boring anecdotes you've heard a dozen times before. Their dullness is as real as their necessity and we cannot dispense with either, they are part of what it means to live a human life. If an hour in church resembles an hundred other hours we have already spent in the previous week that doesn't represent a failure on the part of the pastor. It means that churchgoing is woven naturally into the fabric of our lives. It has this one difference though. At any moment from a phrase of scripture, the verse of a hymn, a sentence in the homily or the elevation of a Host or even a sunbeam dancing on the sanctuary at any moment I say we can suddenly be transpierced by the love of Christ. We can be moved from time to eternity. Transcendence should be a regular visitor to the Sunday service, coming and going as He pleases.
There is a need for Sacred Space and Sacred Time where we can concentrate on what is holy. More than that though there needs to be the possibility of interpenetration between the two. Where we are aware that ordinariness is a part of the church experience then we will also be aware that the sacred can invade and be a part of the ordinary experience too. Our dull days and routine activities, our falling asleep through boredom, are not exempt from an infusion of the divine. Eutychus points us towards this mingling of the two realms. The title of this piece is from the poem Prayer by the Anglican vicar George Herbert it ends with these words, the ‘something understood’ is the subject of this article-
Church-bells beyond the stars heard, the soul's blood,
The land of spices; something understood.

The painting is St Paul by Pompeo Girolamo Batoni