Salvation: It's Not All About Me 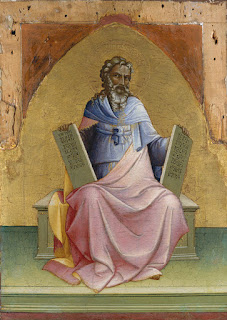 Formulae like 'I accept Jesus Christ as my personal Lord and Saviour' are very commonly used among Evangelical Christians. They can act as the gateway marking the point at which a person becomes a Christian. In that sense they resemble the shahada, the Muslim profession of faith. What they don't resemble is the traditional Christian gateways which are baptism and the profession of the  Nicene creed. There are many things which could be said about this but I propose to focus on what I see as the excessive individualism which this approach to the faith both reflects and encourages.

The formula is theologically sound so far as it goes, its main problem is the premature use of the full stop. It makes the Christian faith in its totality appear to consist of a personal relationship between the individual believer and one member of the Blessed Trinity. This is at best inadequate and at worst positively misleading. If we consider the example of the relationship between God and Moses then we can see that the Prophet never considered himself to be simply an individual fragment of humanity standing before the Almighty One but as a part of the People of God, his well-being was bound up with theirs, theirs was bound up with his. When the Israelites worshipped the Golden Calf at Sinai the Lord planned to destroy them but to Moses He said 'of you I will make a great nation' (Exodus 32:10) Moses declined this honour and, as the psalmist put it 'stood in the breach before Him' (Psalm 106:23.) For the Prophet salvation was not merely a personal affair it was a national one also and his nation consisted of all those, whoever they may be, with whom God had entered into a Covenant relationship.

The New Covenant inaugurated by Jesus on the Cross does not negate this communitarian aspect of the relationship between God and His people. St Paul wrote 'If we are being afflicted, it is for your consolation and salvation; if we are being consoled, it is for your consolation, which you experience when you patiently endure the same sufferings that we are also suffering.' (2 Corinthians 1:6) The nation of God, the New Israel, is the Church which is not only a single body it is actually the body of Christ Himself. So when this same Paul was persecuting the Church Jesus could say to him 'why do you persecute me?' (Acts 9:4) This means, in fact, that the relationship between the Almighty and His people is closer than it was during the time of Moses, destroying Israel was always an option, destroying Himself is never a possibility.

There is an interesting phrase in the dialogue on Mount Sinai. The Lord says ‘My presence will go with you, and I will give you rest.’ Jesus echoed this later by saying 'Come to me, all you that are weary and are carrying heavy burdens, and I will give you rest.' (Matthew 11:28) On the mountain God is telling Moses that He will accompany the people Israel and that for all of them, for each of them He will be their rest and Jesus is not varying this message here. It follows from this that if we have a relationship with God that this includes everywhere that God is and everyone in whom God dwells therefore an exclusive focus on ourselves alone and our personal salvation is not an expression of the Christian faith but its negation. We do not enter into this rest of God other than as members of each other, indeed we, insofar as we are instruments and agents of our Lord, are called upon to be that rest for each person whom we encounter.

Another way of looking at this is from the angle of sin. Evangelicals hold, quite correctly, that we need salvation because we are sinners, but what is sin? In Spe Salvi Pope Benedict XVI looks at this and notes-
"14...sin is understood by the Fathers as the destruction of the unity of the human race, as fragmentation and division. Babel, the place where languages were confused, the place of separation, is seen to be an expression of what sin fundamentally is. Hence “redemption” appears as the reestablishment of unity, in which we come together once more in a union that begins to take shape in the world community of believers"

That which has caused our rupture with God is a crime against unity, against human solidarity, and so to repair that breach Jesus came to be at the heart of community, of solidarity above all with the suffering. If we are to be clothed with Christ (Galatians 3:27) then we too must be immersed wholly in lives of solidarity.

One of the advantages of baptism as the gateway to the Christian life consists in the fact that we cannot baptise ourselves. On our own, at home, in the car wherever, we can use the formula I accept Jesus Christ etc. in response to the radio, TV or internet. As our Christian journey starts in a bubble it could easily continue that way, we proceed as consumers of Christianity and Christian products. The necessity of community and communion is not immediately obvious from such a perspective. To be baptised is to present ourselves before the People of God and have the blessed names of Father, Son and Holy Spirit pronounced over us as we are washed in the sacramental waters. From the outset the message is clear- your salvation is not only personal. Apart from the people whom God has called together you will not be saved, apart from you they will not be saved. The ancient formula of the Nicene Creed explicitly and deliberately unites the concepts of community (Church= Ecclesia), baptism and resurrection so that together we can say-
I believe in one, holy, catholic and apostolic Church.
I confess one Baptism for the forgiveness of sins
and I look forward to the resurrection of the dead
and the life of the world to come. Amen.

The picture is Moses by Lorenzo Monaco