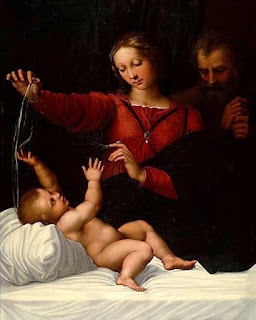 St Luke tells us about three significant forty-day periods in the life of our Lord. These are:
It would seem to be the case that the period in the wilderness was a necessary final preparation before the Messiah began His mission and that the period after the resurrection was a necessary final preparation before the Apostles undertook their mission, to proclaim the Good News to the world. I would argue that the first period constituted a necessary preparation for Mary before she undertook her mission as the Mother of God present in the flesh, Emmanuel, God with us.

The forty-days had an explicitly Marian dimension in that they constituted the time required for Mary to purify herself, according to the Law of Moses, after the birth of a son. Of course strictly speaking she could have dispensed with the requirement (as her Son could have done with circumcision on the eighth day) because the Law was only the shadow of things to come (Colossians 2:16-17) and the reality had now come in the form of the infant Christ. However since He was born of a woman, born under the Law (Galatians 4:4) it was seemly that the provisions of the Law should be adhered to until our Lord completed His mission on the cross at Calvary.

These days, though, were much more than the formal keeping of an outward legal prescription. They were a time of great and never to be repeated joy for the Blessed Virgin. Mary had a life full of sorrow and trouble. From the Annunciation to the first Christmas she had all the anxieties of any pregnancy plus the peculiar difficulties attendant on being the unique virgin mother-to-be of the Son of God. She also had the pain of inflicting pain upon St Joseph by her silence about the conception until an angel enlightened him about it. Furthermore she undertook three long journeys during this time, those to and from St Elizabeth and finally the trip to Bethlehem while nine-months pregnant which ended in the worry about finding somewhere to stay while she give birth.

During the Presentation Simeon prophesied that she would have her soul pierced by a sword (Luke 2:34-25) although there is no doubt that she was more concerned that he also foresaw that her Son would be a sign of contradiction and thus experience in Himself a turbulent life. The shadow which descended upon her at these words would never afterwards depart from her until all was fulfilled. And then, shortly afterwards, she and St Joseph had to escape form the Holy Land altogether and seek refuge in far-off and alien Egypt.

Mary, though, was blessed with these forty tranquil, trouble-free, joyous days with her Son and the holy patriarch. It was a time to bond with Him. To gaze her fill upon Him with the eyes of a mother and of a daughter of God. He was blood of her blood and flesh of her flesh and nourished wholly by the milk of her own body. There were no clouds in the sky. She could reflect with gladness and hope on the words of the archangel Gabriel "He shall be great, and shall be called the Son of the most High; and the Lord God shall give unto him the throne of David his father; and he shall reign in the house of Jacob for ever. And of his kingdom there shall be no end." (Luke 1:32-33) And on those of the angel to the shepherds "I bring you good tidings of great joy, that shall be to all the people" (Luke 2:10) 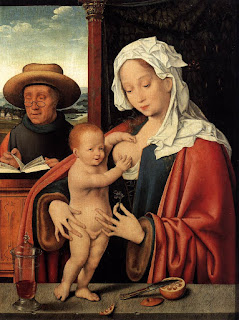 The relationship between our Lord and our Lady that was so close and that endured so much had begun in her womb and continued long after these days but this period was special. For the first time they could see each other and Mary could express her love through the simple, practical actions of the body which are so human and so necessary. To kiss her child, to hold Him in her arms, to see Him sleep, to lie still and hear Him breathe, to feed Him and bathe Him, to smile at Him, perhaps to shed tears of pure happiness over Him. These were the things that transformed Mary into the woman who would be able to do and suffer all that she would subsequently be called upon to endure for the cause of the Redemption wrought for us all by her Jesus.

Luke repeatedly tells us that Mary treasures the things of Jesus in her heart and ponders upon them. This is of twofold importance for these forty-days. Firstly, during that time she could call into her heart the love and mercy of God towards her, her people Israel and all the world and link it to the child whom she was just beginning to know. Secondly, in the long, dark and troubled years to follow she could summon up the spirit of these days to console and strengthen her. This would be no nostalgia for better times but an actual making present within herself of the incarnated love which having been begun in the world and in her inmost being would never pass out of them though they would sometimes be hidden. And this is what makes these days important for us too. We can not only rejoice with Mary's rejoicing but we can imitate her. In our moments of trial we, by contemplating the life of our Lord and recalling our personal moments of grace can bring them to life because they are moments of eternity which have intersected with time. In prayer and thankfulness we, like our Lady, can find the key that lets light into our darkness because we too can adore her Son any time we want to.
@stevhep