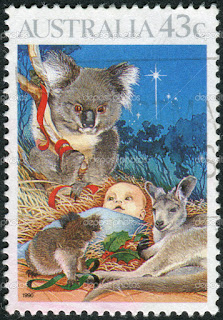 My life, now drawing towards its end, has been long and full of incident. I had intended to leave a record outlining all the extraordinary events which have led me to become the only koala bear in the Holy Land and a Rabbi in the Synagogue of the Creatures. Writing books, as you know, is a difficult task for animals and it took much effort and planning to obtain all the materials needed to write my account. I had only just succeeded in gathering them all together when incredibly, wonderfully, miraculously I encountered the long awaited child of promise. Laying aside then, with some regret, all my plans I will instead tell you about this, the single most important thing which has ever happened to me.


Because of my unusual history (which, alas, I will never now record) I have particular responsibility for providing pastoral care to migrant animals in what the Romans call Palestine. Most of these are congregated in the capital city, Jerusalem, so I am based there but every year I make a visit to the outlying districts. During the course of this I meet established immigrant communities and newcomers and find out what spiritual and material needs they may have. Last winter in the neighbourhood of Bethlehem I met two young pangolins, Harum and Scarum, who told me a fantastic story about a donkey, a manger and a baby (see Adoration of the Pangolins: A Christmas Fable.) Well, you know what pangolins are like; they have terrible eyesight and vivid imaginations so I didn’t set much store by this.


Clearly though something unusual had recently happened in the area. Although the local sheep were not part of my flock, as it were, being ‘indigenous’ I got to chatting with them as I went on my way. They excitedly told me about a vision of angels* who had appeared in the night sky singing about the glory of God and the coming of that child who will unite heaven and earth. If true this was news indeed since creation awaits with eager expectation the revelation of this child of God.* I still wasn’t going to get worked up about it though. In my long life I’ve heard more false rumours than you can shake a stick at and I have learnt to discount about 90% of what excited creatures say.


Since I had finished my circuit of the region I was getting myself ready to return to Jerusalem when a raven dropped by and told me about a caravan from the East which had arrived in Bethlehem. News like this always interests me because I was born in India (something I would have been able to explain if I had stayed with Plan A.) Very often travellers from the Orient have news about my cousin Krishnan Koala who is something of a celebrity on the Indian subcontinent.


Being very keen to speak to the caravan animals I decided to make my way into town that evening. As the only koala for at least a thousand miles in any direction I have to be extremely cautious in the vicinity of humans since they are forever trying to capture me and put me in a circus. I waited then until the town was asleep and warily made my way in. The camels turned out to be quite chatty but terribly ignorant. Not only had they never heard of my cousin, they were from Persia not India, but they didn't even know why they had come to Bethlehem. One of the parrots, Leila, was woken up by our chatter.
“I know why we’re here” he said sleepily, “the child has been born and is in that house.”
I looked at him with wild surmise as he casually waved his left wing towards the nearest human dwelling.
“You don’t mean the One who is to unite earth with heaven and reconcile them?” I stammered.
“That is just what I mean” Leila insisted “and what's more I have seen Him. You only have to cast your eyes over Him for a moment and you will know that He is what He is.”


Now, at last, I was excited. To be within a few feet of the child of promise; an old Rabbi could ask for nothing higher.
“I will see for myself” I said and stealthily made my way into the house.


I found the Lady sitting under a single lamp in a large room. She was looking into a crib, her large, gentle eyes wholly absorbed in what they saw there. Koala’s are creatures of restricted stature and, unlike parrots, do not possess wings. I moved around in the shadows looking for something to climb so that I could get up high enough to see the baby. In doing this I must have made a noise, at any rate the Lady suddenly became aware of me. She looked up, smiled and stretched out a welcoming hand.
“Come,” she said “be not afraid,  The wolf shall dwell with the lamb: and the leopard shall lie down with the kid: the calf and the lion, and the sheep shall abide together, and a little child shall lead them. They shall not hurt, nor shall they kill in all my holy mountain*”
She radiated peace and kindness as she spoke and without hesitation I left the shadows and ran into her arms. The Lady lifted me up saying
“All you beasts, wild and tame, bless the Lord*”
And then I saw Him. Leila was right, as soon as I saw I knew. He was the source of love and it flowed from Him like a stream of living water. Most humans of course would be too dull to perceive it but we animals can see it. I realised too that this flowed from Him to the Lady and had then, through her, reached me drawing me in to adore Him.


Tears flowed from my old eyes “Now, Master, you may let your servant go in peace, according to your word, for my eyes have seen your salvation*” I managed to whisper. After I had filled my eyes and my heart with the Christ child the Lady tenderly set me down on the ground again. She looked into the shadows.
“They have no light” she said. So I set off to spread the good news.