Fifth Sorrow of Mary: She Stands at the Foot of the Cross 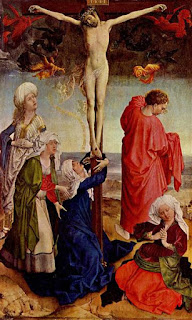 Now there stood by the cross of Jesus, his mother, and his mother's sister, Mary of Cleophas, and Mary Magdalen
(John 19:25)

Hail Mary, who fully entered into the agony and death of your crucified Son.

St John is the only Evangelist to record the presence of the Blessed Virgin on Mount Calvary. He too is the only witness for her role in the wedding at Cana where Our Lord's public mission began. At that time Mary's compassionate heart was moved at the thought of the suffering the newlyweds would endure if they were shamed by being unable to provide for their guests. And what of Mary's immaculate and compassionate heart now as she watches her beloved Son die slowly in front of her eyes?

Then she had said "they have no wine." Now the Precious Blood of Jesus flows like the new wine of the new covenant. Then she had instructed the servants, and through them all the Church for all time "Whatsoever he shall say to you, do ye" (John 2:1-11) Now it was His will that she should fully enter into His agony, and what He willed, she did. So complete and total was her perfect love for Him that not only the gross suffering of His Passion- the nails in His hands and feet, the thorns pressing deep into His skull, the raging thirst- were felt by her but every single breath, every bead of sweat rolling down His skin, every flicker of emotion from compassion to abandonment which He felt was felt with equal force by her, His afflicted mother. Theologians tell us that, were it not for a supernatural act of power by the Spirit, Mary herself would have died on Golgotha so completely was she immersed in her Sons final agony and bitter death.

At Mary's instigation the nuptial feast at Cana had been the gateway to the public career of Jesus. At His instigation the Cross at Calvary has become the gateway to the "marriage supper of the Lamb" (Apocalypse 19:9) His Body and Blood are the foundations of our feast in the Eucharist and the reason for our hope in eternity. The Apostles consumed Him under the appearance of bread and wine at the supper of Holy Thursday. Mary, His Mother, whose flesh was His flesh and whose blood was His blood consumed Him and was consumed by Him through her most perfect union with Him on that darkness-shrouded hill. That union has never been broken since which is why we can approach Mary in prayer with such perfect confidence. There are many reasons why Jesus will listen to her petitions and not the least of them is the unbreakable bond formed between them on that dreadful day.
@stevhep


The painting is Crucifixion by Robert Campin
Posted by Catholic Scot at Friday, April 07, 2017