Seventh Sorrow of Mary: She Buries Her Son 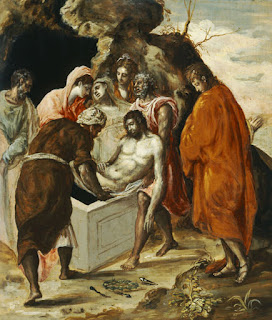 And the women that were come with him from Galilee, following after, saw the sepulchre, and how his body was laid
(Luke 23:55)

Hail Mary, whose Son was hidden from you by the darkness and silence of the tomb.

For Jews and Christians alike the psalms provide the natural language of prayer. In His final extremity Jesus had directly quoted two of them. By His grave His afflicted mother might have added a third-
Thou lightest my lamp, O Lord:
O my God enlighten my darkness
(Psalm 17:29)
The One who was the Light of the World and the light of her Immaculate Heart had been sealed into the total blackness of the sepulchre. Only God, in His power and compassion, could console her now. What did she have left in the world. All was gone. All gone.

Now there remain faith, hope, and charity, these three: but the greatest of these is charity. (1 Corinthians 13:13) Bereft of everything else Mary still firmly possessed the three theological virtues, which by the Grace of God she held to a superlative degree. Properly speaking faith is not belief in a thing; it is trust in a person. Had our Lady not, even as a girl, been firmly united in faith to the Father He would not have entrusted her with the privilege of becoming mother of His Son and our Saviour. That faith never wavered even in the bleakest moments of the first Good Friday. It stayed with Mary and strengthened her as the stone closed over the corpse of her beloved Jesus.

Likewise properly speaking, hope is not an optimistic feeling that things will somehow be alright in the end. It is an inner certitude that the promises we have received will be fulfilled. The Archangel Gabriel had told the Theotokos anent her Son-
"He shall be great, and shall be called the Son of the most High; and the Lord God shall give unto him the throne of David his father; and he shall reign in the house of Jacob for ever"
(Luke 1:32)
Mary did not know how these promises could be kept in the wake of the seeming total failure of her Son's mission and His shameful and agonising death. That they would be kept she knew with the firmness of a supernatural hope. Her part was to await their fulfilment and this she would do in the presence of sorrow but the absence of despair.

And charity, caritas, love. The compassionate Virgin had around her the Holy Women, not least the inconsolable Magdalene, as objects for her outgoing, generous love even in calamity and as sources for incoming consoling love at her time of greatest need. She had the young St John, a new son for her as Jesus had said. And more than these she had her love for the Christ, her child. A love too powerful for death to overcome. Too powerful to end in time. A love, she knew which would shine throughout eternity, living and unconquerable. As that love had so recently led her to stand at the foot of the Cross now it would lead her to wait for Him to redeem the time and to re-unite Himself to her. And so, Mary waited.
@stevhep

The painting is The Entombment of Christ by El Greco