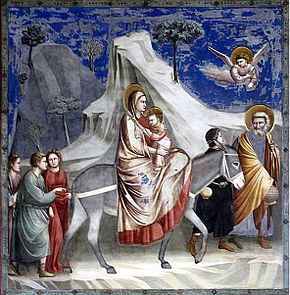 Hail Mary, who for love of your Son fled into darkness and exile.

There is a world of frantic activity covered in the few words Who arose, and took the child and his mother by night, and retired into Egypt. It is also a sadly familiar picture. Thousands of times over the centuries families have been roused at night and hurried out of house and country through fear of the Gestapo or Islamic State of their day. We can picture the scene, Joseph wakes the sleeping Virgin and after a some hurried words of explanation they pack their few small belongings together with whatever food and drink they can collect, lift up the sweetly sleeping infant Jesus and head out into the darkness for an unknown destination.

In the 21st century it may be difficult to fully comprehend the significance of their escape commencing at night. There were no electric lights, no headlamps, only the moon and the stars often hidden by clouds. Especially when travelling over unfamiliar roads alone and without a guide, as the Holy Family were, it was a course of action so hazardous that only the extreme nature of the danger they were escaping could justify it.

Imagine the state of mind of our Lady. She went to sleep with her beloved Son near at hand, St Joseph providing for them both, the memory of the visit of the Magi fresh in her mind and only the prophecy of Simeon casting a vague shadow on her happiness. Then within an incredibly short time she finds herself, baby in arms, travelling through an impenetrable blackness towards a strange and hostile land pursued by a malevolent hatred whose nature she, the sinless one, the pure one, the loving one, could not begin to comprehend.

It is significant that in this situation the Blessed Virgin unhesitatingly trusted herself and her Jesus to St Joseph. She did not doubt his testimony anent the Angel's warning and she did not doubt his ability to protect and guide them through the difficult times that lay ahead. In her life Mary not only illustrated the beauty of loving devotion to God but also the importance of the family as the strong basic unit of human life. To love the Divine One is to love ones neighbour and to share one's life with others in a continual mutual giving. Being driven into sudden exile was a great shock and sorrow to Mary, bringing a thousand worries and fears in its wake, but she had the consolations both of Grace and of nature through the constant protecting love, in their different orders, of God and of her husband.

The Evangelist John, to whom Mary was an adopted mother by the express instruction of Jesus, wrote "If anyone says, “I love God,” but hates his brother, he is a liar; for whoever does not love a brother whom he has seen cannot love God whom he has not seen" (1 John 4:20) No Christian can look upon the second sorrow of Mary with true sympathy and love if they harden their hearts against those who today are driven from their homes by fear of persecution and death. Christ is present in the midst of all suffering and Mary, His Mother, is with Him. You will be sentencing them to another exile if you fail to extend to hand of neighbourliness to the refugee who flies to your country, your city, your street. You cannot truly meditate on the things of God with your mind if you do not perform the actions God requires of you with your body.
@stevhep

The painting is The Flight into Egypt by Giotto