A Gentle and Peaceful Spirit 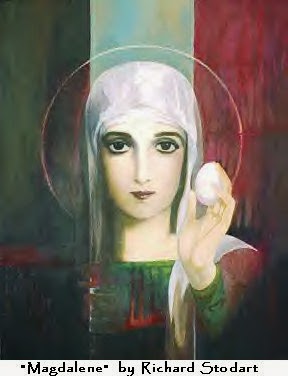 3 Your adornment should be not an exterior one, consisting of braided hair or gold jewellery or fine clothing,
4 but the interior disposition of the heart, consisting in the imperishable quality of a gentle and peaceful spirit, so precious in the sight of God.
1 Peter 3

This comes from the advice that St Peter gives to Christian wives. If I was offering a literal response to the passage then I would be obliged to explain it, if I were a Conservative, or explain it away, if I were a Liberal. Since I am responding to it at a spiritual level then I can cheerfully ignore these vexed questions altogether. I have, I think, some warrant for doing so. Ancient Christian tradition has characterised a number of things as feminine. The soul of each believer, male or female, is referred to as 'she' with the notion that the soul is a bride to the bridegroom Jesus. The Church too is often referred to in similar terms. Scripture itself characterises Wisdom as a woman (Proverbs 8) And, of necessity, Mary the Mother of God is a woman. So it is reasonable to suppose that these words from the Prince of Apostles have universal applicability.

The central point of the passage is, I would suggest, to be found in the words  the imperishable quality of a gentle and peaceful spirit . These qualities are the leaven which leavens the whole disposition of the Christian heart which is adorned by them. It is an interior beauty which bears fruit not only in the relationship between a person and their God but also in the outward actions of that person-
The good person out of the good treasure of the heart produces good
Luke 6

A peaceful spirit is not only one that is peaceable and at peace she is also peace itself. She manifests her peaceableness through deeds and words. A soft answer turns away wrath, but a harsh word stirs up anger (Proverbs 15) Where voices are raised she speaks softly, where tempers are hot she is cool, when demands are insistent she is undemanding. She serves peace before she serves herself. She is at peace because wherever she is and whatever she is doing she has within herself what St Catherine of Siena called the interior cell into which she can retire at will. Catherine suggested that the advice of Jesus would be this  “Dearest children, if you wish to discover and experience the effects of My will, dwell within the cell of your soul”  (Letter 41) A heart which communes with Jesus as with a friend cannot but be serene and still and at peace.

When asked by St Bernadette what her name was our Lady of Lourdes replied I am the Immaculate Conception (Que soy era Immaculada Concepciou.)  She might have said 'I am she who was immaculately conceived' but she did not. This suggests that there was such an inextricable link between herself as a person and the phenomenon of the Immaculate Conception that the two could be identified as one. When I say that a peaceful spirit is peace itself I am suggesting a similar identity between the spirit and the phenomenon. This would be hyperbole if we were merely to consider the spirit of a person as being both unique to them and wholly independent (autonomous in the favoured word of our era.) But we cannot so consider a person. Unique, yes certainly. Wholly independent, no, never. A person is always in bondage either to their desires in this world or to the transcendent love who is ever present in all worlds and times. And she who casts herself unreservedly as a bride into her beloved Divine Bridegroom's arms becomes one person with Him. As He is peace itself in His essence she becomes peace itself through participation in Him. As St John of the Cross put it-
the soul seems to be God rather than a soul, and is indeed God by participation; although it is true that its natural being, though thus transformed, is as distinct from the Being of God as it was before.
Ascent of Mount Carmel

A gentle spirit is not only gentle in what she does but she is gentling and also gentleness itself. Gentleness is a thing of delicacy. It is a light touch, it allows another person to be themselves yet offers them the strong external support which they need to be just that. In some ways it is a quality easier to define by what it is not. It is not harsh, or authoritarian or cruelly judgemental. It is the softest of the human qualities and requires great strength to be lived out. The gentling qualities of the gentle spirit may have been at the forefront of St Peters mind when he recommended this as the path for Christian wives to convert pagan husbands. However that might be it is a spirit which has an effect on all those whom it encounters. One effect on the hard and the obdurate is that they seek to bully and dominate all the more, they mistake gentleness for weakness. In this they display not only their wickedness but their lack of wisdom. The reed may bend but she does not break.

Imperishable quality. The longer I have been ill the more I have come to see the difference between that which perishes and that which does not. Even those without a belief in God, or specifically the God of the Christians, may see that while our insignificant human lives might come and go peace and gentleness remain forever as qualities which lie at the heart of what it means to be a good man, a good woman, to be goodness itself. The things which pass away are spasms, the passions of anger, envy, spite, lust and so on. That which endures, the kindnesses we remember, the heroes who have captured our hearts, is founded not on passion but upon values which flow from the steadfast spirits of gentleness and peace. Where the fruit is tranquility the tree on which it grows is the true Tree of Life.

Over the years I have read many (too many?) spiritual books, articles and guides. One feature they often have in common is that they spend a lot of time describing in glowing terms the beauty of the destination and very little time giving you practical advice on how to get there. Now I am writing I begin to see why that might be. The destination is not a place, it is a relationship. We are all different, unique as I said earlier. How can I say what the best way for you, the unique and only you, might be to enjoy the closest possible relationship with the One who made you to be what you are? It might help if I told you what works for me you say. Well, it would be presumptuous to say that anything has worked for me. I have done so much that is foolish and wrong, I have lived so long in darkness. Tomorrow might see me, for all I know, plunged into ever deeper darkness, ever more culpable follies. Besides, it has often been borne upon me, sometimes painfully so, that I am not like other people. I am odd, although the word 'weird' has been used with rather more frequency. So my guidance might be worth less than nothing.

I will, notwithstanding, make a recommendation. I do so not because I place any confidence in my own judgement, I am not at least that foolish, but in the judgement of those great Saints before me who have made the same recommendation. It is towards the figure of Mary, the Virgin Mother of Jesus, that I look. She is the gentle and peaceful spirit par excellence. She, the Immaculate Conception, is so at one with her divine Son that she is Gentleness, she is Peace and she leads us to Him and points us towards Him, and pleads for us with Him and for Him with us. Invite Mary into your heart and you will be invaded by peace, occupied by gentleness. She will lift you up from this perishing world and place you into the embrace of the imperishable and Divine  Bridegroom.