It Shall Not Return to Me Void 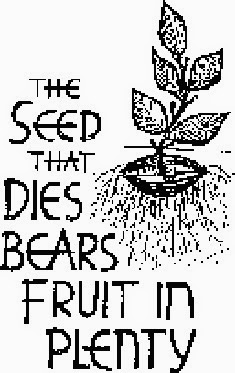 10 And as the rain and the snow come down from heaven, and return no more thither, but soak the earth, and water it, and make it to spring, and give seed to the sower, and bread to the eater:
11 So shall my word be, which shall go forth from my mouth: it shall not return to me void, but it shall do whatsoever I please, and shall prosper in the things for which I sent it.
Isaiah 55

3 Jesus, knowing that the Father had given all things into his hands, and that he had come from God and was going to God
John 13

Jesus, and after Him the Apostles and Evangelists, was very insistent that His life and mission were a fulfillment of the prophecies contained within the Old Testament Scriptures in one form or another. Given that His and their audience was in the first instance Jewish that made perfect sense. Is it really a matter of any importance to us who are not Jewish now 2000 years or so later? For Christians the sequence has become somewhat reversed. The Jews already believed in the Scriptures and could then go on to believe in Jesus, Christians believe in Jesus and then go on to believe in the Old Testament. Most of the world, however, is neither Christian nor Jewish so what do the words of angry old Jewish men from 3000 years or so ago mean to them? Well, one answer might be that if we can discern in the prophecies genuine predictions about events which were only fulfilled much later we could conclude that there is indeed a supernatural power at work in the world and that the things which Christians say about that power have some basis in human history. Which means that their claims are worth paying earnest attention to.

There has been much learned discussion about who the author(s) and editor(s) of the Book of of Isaiah might have been. What is beyond doubt is that it was written a very long time before the Gospel events took place. It could be argued that Jesus and the Evangelists consciously modelled events or their descriptions of them in order to appear to fulfil well known passages of Scripture which the Jews had, perhaps, previously applied to the Messiah whom they were expecting. I think this did to some extent happen, it was no accident that Jesus rode into Jerusalem on a donkey after Zechariah had written his prophecy about the King doing just that. However, I do not think that this can apply here to this particular prophecy of Isaiah since the elements within it correspond to the internal truths of our Lord and His mission which would make them applicable even if He has behaved in significantly different outward ways.

The Word, like the rain, 'gives seed' in this fashion- Very truly, I tell you, unless a grain of wheat falls into the earth and dies, it remains just a single grain; but if it dies, it bears much fruit (John 12:24) Jesus, before He could return to the Father had, like the wheat grain to go into the earth, the Sepulchre where He was laid on the first Good Friday, before He could become fruitful and then ascend to where He had been 'in the beginning' As the rain soaked the earth to make this possible for the seed so did He pour out His Precious Blood like torrents to make the seed sprouting from that earth suitable to be harvested by His Church.

If He is the seed He is also the sower "He answered, ‘The one who sows the good seed is the Son of Man"(Matt 13) That is, Jesus is both the High Priest who offers the sacrifice and He is the sacrifice which is offered. As Isaiah wrote "So shall my word be, which shall go forth from my mouth: it shall not return to me void, but it shall do whatsoever I please" so the Letter to the Hebrews responded  ‘See, I have come to do your will.’ ...it is by God’s will that we have been sanctified through the offering of the body of Jesus Christ once for all."(Hebrews 10)

Isaiah also talked about giving 'bread to the eater.' And what is Jesus? " I am the living bread that came down from heaven. Whoever eats of this bread will live for ever; and the bread that I will give for the life of the world is my flesh.’"(John 6) The seed which is sown and then dies becomes fruitful and transformed into the true bread that nourishes. Life proceeds, and proceeds abundantly, from out of that one death. And to whom does it proceed? "To the eater." We all eat and need to eat and that bread is made available to all, though not all choose to eat it. Some prefer death to life because the bread is not to their taste.

But to those who choose life Isaiah continues with his prophecy. And as his words about Jesus came true let us hope that these words about you also come true-

The Lord says 'I sent it' The rain, the seed, the sower, the bread and the joy and peace all proceed from God. Mary sang "he has filled the hungry with good things, and sent the rich away empty." (Luke 1) Which is to say that He sends freely but only those are fed who know themselves to be hungry, only those who are aware of their nakedness are clad, only the ones who know that they are dead can be made alive, The seed was first sown in the virginal heart of Mary when she said behold the handmaid of the Lord, be it done to me according to your word (Luke 1) only after this was the Word incarnated in her womb. She is in this an example to us all. For there is this difference between us and the earth in which the seed falls. The seed grows or fails to grow in the earth in response to purely mechanical factors, the nature of the soil, the temperature, the amount of rainfall and so on. The seed of the Word grows or fails to grow within us to the extent that we echo or fail to echo these words of the Blessed Virgin 'be it done to me according to your Word'